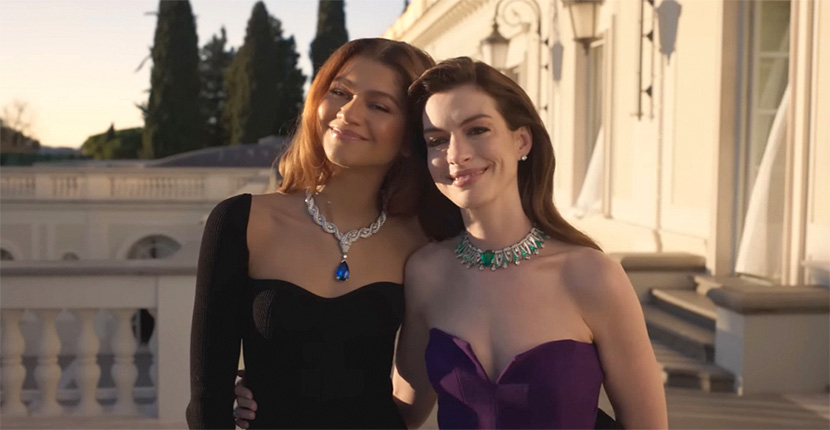 May 27, 2022—Bulgari dropped its latest ad campaign ‘Unexpected Wonders’ on Monday. During the course of this week the just over 2-minute video has been everywhere and I mean all across media channels.

Naturally, the mainstream fashion outlets covered the short film set in Rome and starring Anne Hathaway and Zendaya. Some of the hard-hitting style channels couldn’t resist it either. The famous fashion critics at Diet Prada created the portmanteau for the stars “Annedaya” and said they were stans of the production.

The acclaimed Italian film director, Paolo Sorrentino, who was behind the camera inspired film outlets to review the ad campaign as well. Sorrentino is most well-known for The Great Beauty made in 2013. It won the Academy Award, Golden Globe and BAFTA for Best Foreign Language Film.

Some movie critics remarked on the Ocean’s 8 undercurrents of the production. A few wanted Ocean’s 9 with the duo produced immediately. Others felt there was a certain Euphoria feeling and loads of sexual tension between the stars.

As for the jewelry, I can handle that review. It covers Bulgari’s collections from the everyday jewels to the one-of-a-kind masterpieces.

The gold collection B.Zero1 which was originally launched in celebration of the millennium and has remained wildly popular throughout the 21st century can be seen on Zendaya. She also has on pieces from Bulgari’s BB collection and a High Jewelry collar that is a real scene stealer.

Anne Hathaway wears an array of High Jewelry. My favorite has to be the gem-encrusted Serpenti bracelet watch that is reminiscent of the designs Bulgari launched during the mid-20th century.

See what all of the buzz is about in the video below.