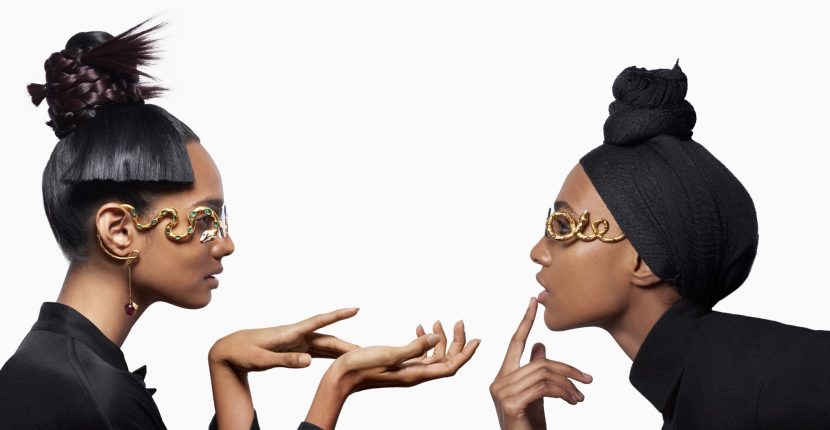 If you think eyewear set with precious stones is an unusual item to launch a collection, you are right. We have never heard anyone taking that route into the fine jewelry field. But then again, we have never met a designer quite like Francis de Lara’s John-Paul Pietrus.

A London-based fashion photographer and editor-at-large of 7th Man and Nomads magazines, John-Paul launched his line of bejeweled sunglasses a year ago. Described as “the world’s most expensive glasses,” the accessories are made in silver, plated in gold, set with diamonds, precious stones, and occasionally wood. The motifs are inspired by Renaissance art and feature details such as snakes, a teardrop and the forbidden fruit of Adam and Eve. “I imagine them as, and wish them to look like, well-preserved relics, rather than new pieces in the shape of things past,” says John-Paul. Each pair takes an exhaustive 250 to 700 hours to craft and comes with an eye-watering price tag of £19,800 or around $24,700.

Now, the designer has launched a collection of jewelry, largely handmade in Florence, that have the same spirit as the eyewear. As you can see from the photos here, the eyewear and jewels transform a look. They would be the ultimate pieces to grab attention at your next Zoom meeting. Or better still, a great way to step out in the world with an eye-catching new style when the stay at home orders from the virus are finally lifted.

Find out all about the jewels and eyewear in my interview with the designer below. 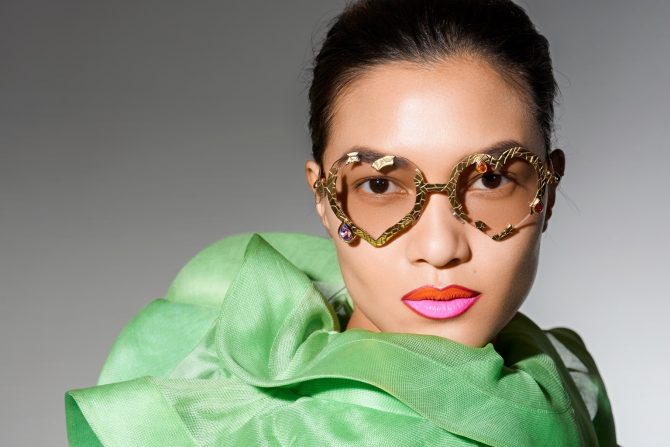 Tell us a bit about yourself
JP: I was born in the Philippines and grew up in Minneapolis, in the Midwest of the U.S., along with four years divided between rural Australia, Paris, and Hong Kong. I studied at the Minneapolis College of Art and Design (MCAD). I moved to London over 23 years ago, which became my home. I have now been there longer than any other places that I have lived, combined.

Has a multicultural life influenced your creativity?
JP: I really soak in what is around me like a sponge; I enjoy learning about cultures and their creative expressions. I also appreciate the different ways people arrive at their creations, not simply the end form; but the approach itself. 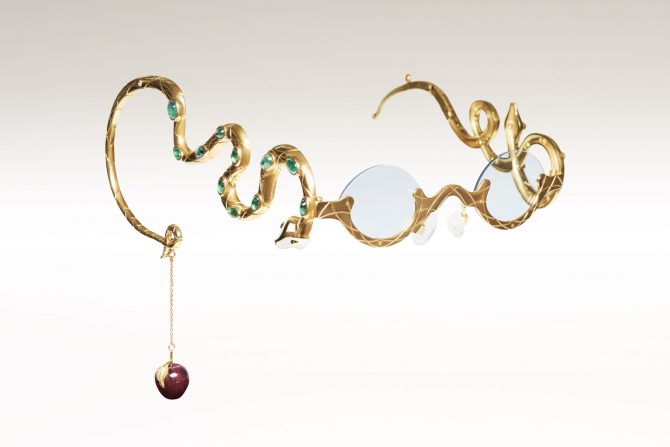 The ‘Eve’ Francis de Lara eyewear features a red tourmaline apple, two gold plated and emerald serpents as the side temples with cognac diamond, pink sapphire and enamel details. The front of ‘Eve’ is half-rimmed and finished with the criss-cross engraved motif. Photo courtesy

How did life lead you into designing?
JP: In 2015, I found myself very frustrated with the negative sides of the fashion industry. I decided to take a ‘mini-sabbatical’ and escape London; I chose Florence as I was in a long-distance relationship with someone there. It was that person who recommended I investigate attending one of the jewelry schools there in early 2016. I had always had a fascination with fine-jewelry as a photographer, marveling at all of these incredible creations that arrived on-set from all of the big houses, as well as independent designers. Additionally, Renaissance art history had always been an interest of mine, and Metallo Nobile, where I ended up studying, taught me more about the Renaissance and precious and semi-precious materials.

What sparked the jewelry-eyewear concept? And what drew you to Renaissance artworks?
JP: My professors and some of my classmates encouraged me to continue on the jewelry journey after my studies. They thought it was interesting how I did not think like a ‘traditional’ jeweler or goldsmith, that my ideas were outside of the proverbial box. I wondered ‘what on earth can I do that is interesting when you have these massive jewelry houses and scores of independent designers creating the most wonderful things? What could I contribute?’ Being in Florence, I sauntered over to the Palazzo Pitti or the Uffizi many a day. As I was looking at all of the beautiful Renaissance paintings: royalty and clergy adorned in incredible jewelry and clothing, I thought to myself “what kind of sunglasses would they have worn if they had had them?” That idea developed into the idea of these jewelry-glasses: some for sun, and some for evening with clear to lightly tinted lenses that a woman can don with a simple black ‘Le Smoking’ tuxedo or a stunning red-carpet gown, to make a bold and beautiful statement, as an option to the more traditional necklace or brooch. My vision of Francis de Lara has recently evolved with creations in traditional jewelry forms (earrings, rings, etc.) to expand the menagerie. 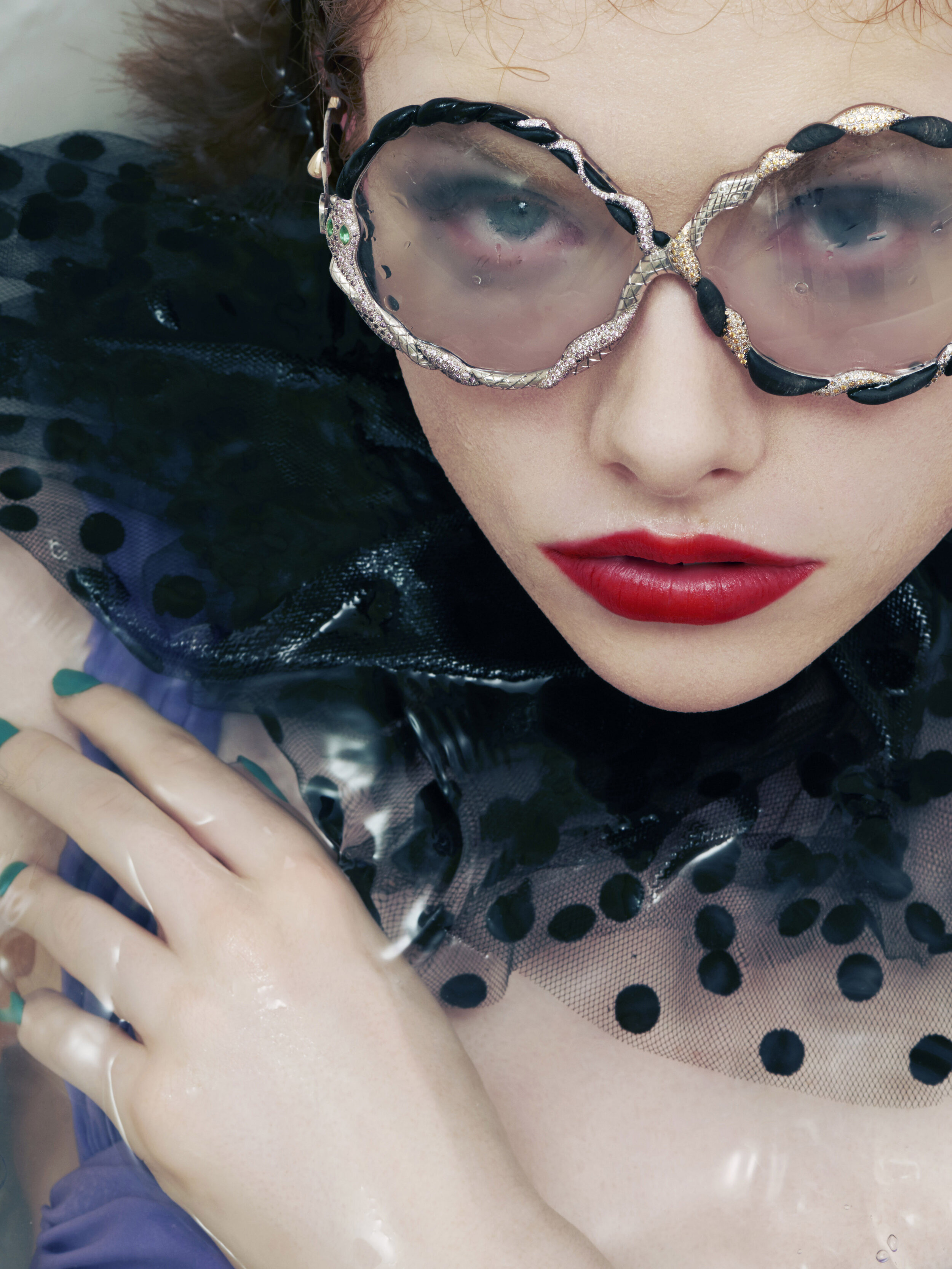 How long does it take to customize, handcraft the frames?
JP: The ‘Ruby Teardrop’ was the first frame, and to materialize it took 360 hours on the third prototype. ‘Eve’ was the most time consuming at over 700 hours, and we had to do two prototypes before the third was correct. In fact, the first pair was made of 18k gold, rather than sterling silver with solid gold elements, and it looked gorgeous, but weighed way too much. That is why the eyewear has a mostly sterling silver base, as it is lighter than gold, but I have always put enough solid gold in the piece to make at least one wedding band.

What was your first eyewear? How did the rest of the pieces evolve?
JP: ‘Ruby Teardrop’ was the first piece; I incorporated the drop-of-blood ruby motif as I was always in awe of stories of Renaissance icons crying blood tears miraculously. The wavy sides are engraved with serpentine scales, and set with ovals of amethyst, which is one of my favorite stones as I really adore the color purple, it’s mystery and royalty. ‘The Three Serpents’ was next, in an effort to make something more delicate, light, and meticulously detailed. The side-temples drip three solid white-gold drops, and when these are folded, they make a beautiful symmetry. And then there was ‘Eve.’ This was actually either the first or second design, but took a long time to execute due to its large size and asymmetry; it got me an exclusive article with the British Vogue. ‘My Bleeding Heart’ – although officially launched with my first collection in February 2019 as part of Matchesfashion.com’s ‘Innovators’ program – is a stand-alone piece. It incorporates a Renaissance sacred heart with the blood-drop gems motif, which is now one of my Francis de Lara signatures; and I opted for craquelure to emphasize the breaking heart. Pieces of the breaking hearts form the front ‘float’ in midair and are attached to the lens. In this instance, the largest drop was a pink kunzite. The pair sold and is succeeded by ‘My Bleeding Heart II.o’ 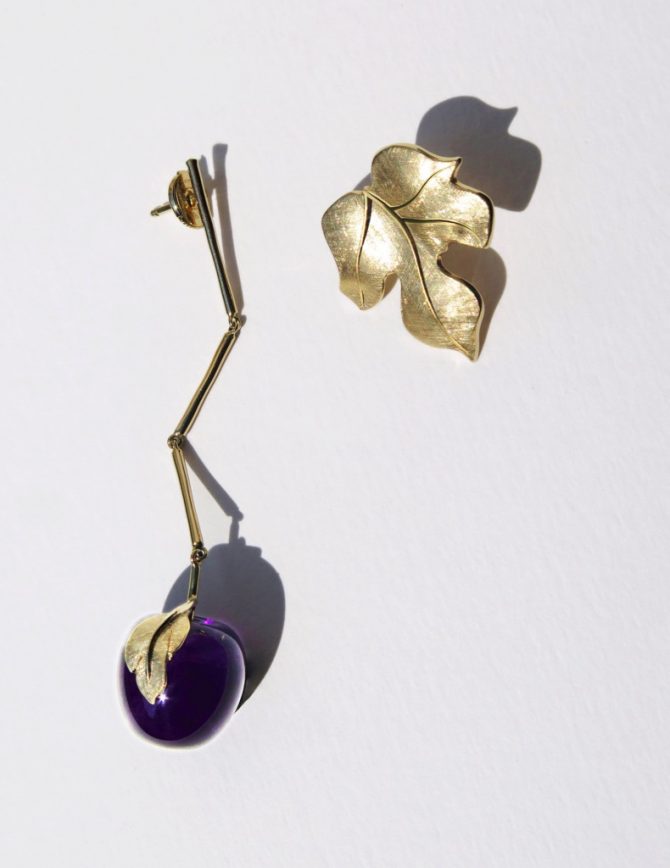 Adam & Eve Earrings – Adam earrings feature an 18k gold fig leaf with a ‘silk’ surface texture created by meticulously scratching the surface hundreds of times over by hand, while the Eve earrings have an amethyst apple, carved exclusively for the brand, by a lapidary in London. Photo courtesy

Your debut jewelry line is inspired by the Adam & Eve eyewear – what made you zero in on this inspiration?
JP: To be honest, it was Francis de Lara admirers who urged me to make non-eyewear pieces as, although they loved the eyewear, they wanted something more wearable on an everyday basis, and something more affordable. Eve-eyewear features a drop-down trompe-l’oeil tourmaline apple earring, so it was quite naturally turned into a drop-down earring design. With Eve in mind, I thought of Adam, and chose the fig leaf to represent him. The earrings are sold as singles. I like the Adam & Eve story for its themes of innocence and innocence lost, the serpent and apple as symbolic motifs, and, of course, the Renaissance paintings depicting the story in themselves are marvelous artworks.

How would you describe your design philosophy?
JP: Do good work, work with good people, be responsible with the sourcing of materials and in work ethic and procedure, and put your heart and soul into it. All pieces are largely handmade and that is very important to me.

What’s in the pipeline?
JP: I am also working hard on developing the entire line (eyewear and traditional forms), and I want to still keep growth slow, but pick up the pace slightly. I like the idea of working on pieces more than on collections, all within the same family

How The Jewelry World Coped This Week