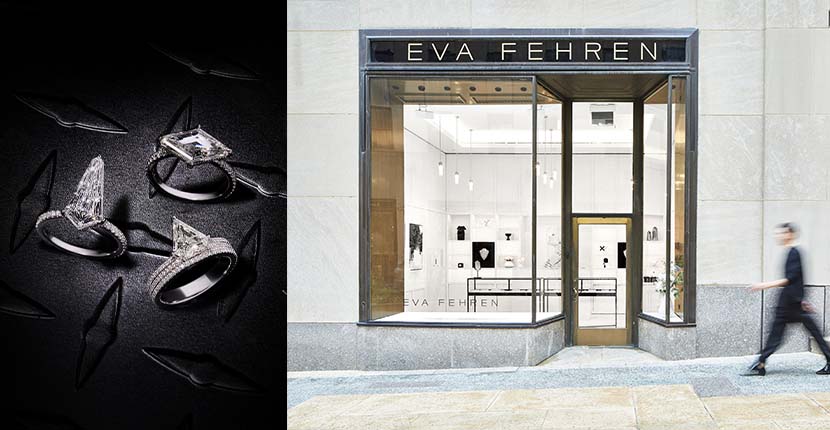 Rings from Eva Fehren's Reflexion collection and the exterior of the Eva Fehren boutique at Rockefeller Center. Photo courtesy and Herring & Herring

Diamond jewels, friends and a new boutique were all part of the festivities

December 17, 2021—Ten years ago I walked into Eva Fehren’s first press preview held at her mother’s townhouse in the West Village. I remember it like it was yesterday. Eva showed her now famous minimalist X rings among other things.

While I was looking at the jewels, her publicist Cindy Krupp was reviewing her career in design that led up to this moment. She ended by saying, “She has chops.” I could see that she did. There was nothing like what she was doing on the market.

I also remember running into her the next morning and going over all the jewelry she was wearing while we both were picking up a green juice. I could be wrong, but I feel like she had on a Rick Owens leather jacket which matched the spirit of her jewels to perfection.

Flash forward to now, Eva has never veered from her original vision of minimalism. She has just slowly and meticulously added designs, evolved and upgraded the work while maintaining the still popular pieces from the first collection. Along the way she garnered a cult following and received multiple accolades.

To mark her big 10th anniversary, Eva celebrated in several ways that showed how far she has come while still maintaining the excellence she had from day one.

EVA HAD A PARTY… Eva had an intimate cocktail party to celebrate her 10th anniversary at the divine Waverly Inn on Bank Street in the West Village which was just a short walk from where her first preview was held. It should be noted the proceedings were organized by the Krupp Group.

After 10 years, Eva has stayed with the same publicist who launched her. Not only is that a rarity. I don’t think I know anyone who has ever remained with their publicist so long, but that’s lovable and loyal Eva.

Eva’s mother, who hosted her first press event, was there and so were her husband Dimitri Scheblanov and business partner Ann Gorga and a smattering of editors who have been around from the beginning like yours truly.

There were also a few of her famous fans who clearly love the designer including Claire Danes, Brooke Shields and Vera Farmiga.

EVA LAUNCHED A JEWELRY COLLECTION…“I used gems that I could have only dreamed about when I started,” explained Eva when we were looking at her deluxe Reflexion jewels.

Geometrically shaped diamonds including trillions, shields and lozenges, echo the silhouettes Eva has always designed around which are inspired by the angular forms in New York City from the skyscrapers to the sidewalks.

“The collection marks an evolution for the brand; the ability to move into an even more elevated space with our materials, artistry and craftsmanship and my desire to be bolder as a designer,” says Eva.

“I wanted to capture this important milestone with the most special, desirable materials possible. Ten years feels like an even bigger milestone given the past year, and what we have had to overcome.”

EVA OPENED A BOUTIQUE AT ROCKEFELLER CENTER…When people from around the world think of New York, Rockefeller Center is surely one of the most iconic locations on their minds.

Eva boldly chose to open her first boutique at Rockefeller Center in the North Channel Gardens, the interior path between the English and French buildings that leads down to the ice-skating rink during the fall and winter months not to mention the Christmas Tree.

She designed the space with local artists and fabricators. From flooring and finishes by Michelle Kole and jewelry cases by Youngbuk to stonework by PR Stone, everything has been customized to reflect Eva’s aesthetics.

In addition to Eva’s jewels, lifestyle items can be found in the inventory including catchall bowls by Fernando Mastrangelo Studio, candles by L’Object and Christian Lord sculptures.

EVA MADE A VIDEO…Eva got a group of her friends together, who happen to be well known tastemakers, and asked them to describe her brand. Watch the video below and find out just what they said.

These Jewels Are the Art Deco Tribute We Needed