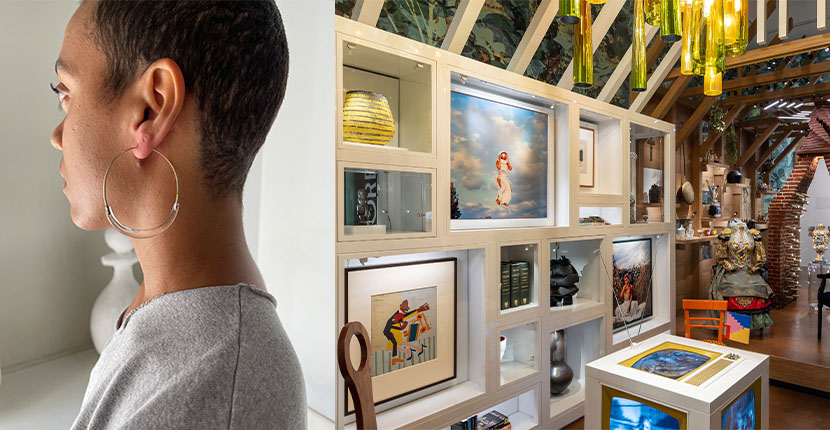 A model wearing hand carved crystal and gold earrings inspired by the Met's Before Yesterday We Could Fly: An Afrofuturist Period Room. Photo Ten Thousand Things and the Metropolitan Museum of Art

The Ten Thousand Things Jewels for The Met

November 5, 2021—Until now, the period rooms at the Metropolitan Museum of Art in New York City have been just the type of traditional settings you would expect from the storied institution. There is a Frank Lloyd Wright Room and stair hall by the legendary architectural firm McKim, Mead & White. The museum has a tapestry room from the Croome Court, an eighteenth-century boudoir from the Hôtel de Crillon and many other interior spaces.

Among all the various styles of décor, there has never been anything like Before Yesterday We Could Fly: An Afrofuturist Period Room.

The museum’s description of the new room says: “Like other period rooms throughout the Museum, this installation is a fabrication of a domestic space that assembles furnishings to create an illusion of authenticity. Unlike these other spaces, this room rejects the notion of one historical period and embraces the African and African diasporic belief that the past, present, and future are interconnected and that informed speculation may uncover many possibilities.”

The narrative of the décor centers on the question of what life would have been like for a vibrant 19th century Black community, Seneca Village, if it had been allowed to thrive as opposed to being displaced by the construction of Central Park. Works from the Met’s collection dating from the 17th century to this year, decorate the period room.

While there is no jewelry among the art and objects, the visionary team at The Met Store felt it would be appropriate to include a jewelry collaboration in the offerings celebrating Before Yesterday We Could Fly as part of their efforts to inspire audiences to engage with themes of the exhibition.

“When we began working with the museum, we had the pleasure of hearing about the Before Yesterday We Could Fly from the curatorial team,” explains David.

“In order to begin the design process, Ron and I continued to immerse ourselves in the story of Seneca Village and in the work of musician and filmmaker Sun Ra, a pioneer of the Afrofuturist philosophy and aesthetic. Sun Ra called for ‘only good vibrations in the new world,’ which became the foundation of a collection conveying happiness, optimism, and beauty.”

The centerpiece of the capsule collection are silver large round hoops and smaller oval hoops handcrafted at the Ten Thousand Things studio and set with crystal and lapis hand cut in Jaipur, India.

The gems were chosen as symbols that reflected Sun Ra’s vibrant attire. (Gold versions of the earrings are available via tenthousandthings.com.)

“It was amazing for us to work with the Met and create around Before Yesterday We Could Fly” says David. “It was equal parts historical and forward-thinking as well as a lot of good vibrations from Sun Ra.”

All The Details of The Ducal Ring In Dune