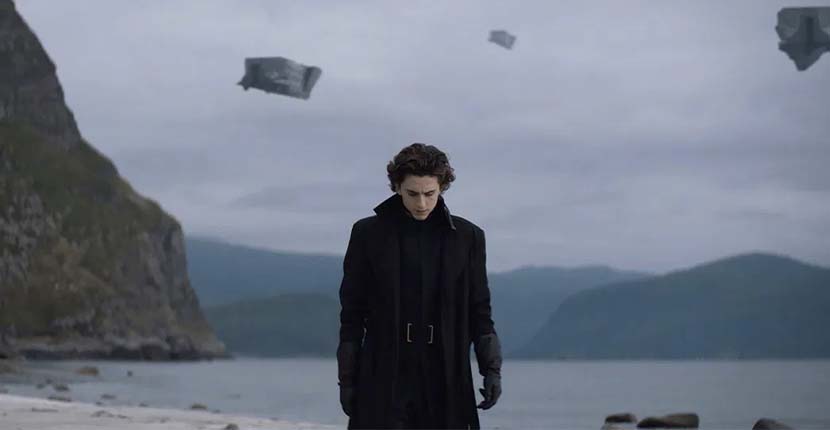 Paul Atreides (Timothée Chalamet) who will inherit the Ducal ring from his father in Dune. Photo Warner Bros.

All The Details of The Ducal Ring in ‘Dune’

October 26, 2021—The sweeping epic Dune was finally released on Friday and I have already seen it twice. So has my sister. We both saw it a couple of times to capture more of the rich detail in the narrative and production. The amazing film, which hit theaters and HBO Max simultaneously, tells half the tale from the 1965 science fiction novel, of the same name, about a complex society in the year 10,191.

Its main focus is the noble House Atreides lead by Duke Leto Atreides (Oscar Isaac). His son Paul Atreides is portrayed by Timothée Chalamet, the star of the movie. They are surrounded by a wonderful cast of characters including Paul’s mother, Lady Jessica (Rebecca Ferguson), the duke’s advisor Gurney Halleck (Josh Brolin) and his strongman extraordinaire Ducan Idaho (Jason Momoa).

At the beginning of Dune, the House Atreides is entrusted with the governorship and the goal of bringing peace to the dangerous desert planet Arrakis where spice, the most valuable material in the galaxy, is mined. The desert planet, also known as Dune, is where Paul Atreides will encounter Chani (Zendaya) who appears in his dreams.

The deal for Arrakis is sealed by the Duke of Atreides with his Ducal ring. He places it with great intention into gold wax. The ring, which gets closeups throughout the film in the symbolic role it plays, was handmade by Heidi Nahser Fink.

A master bench jeweler, Heidi has been moonlighting in the movies since 1997 when she created Orion’s Belt, the galaxy pendant worn by a cat, for Men in Black. Heidi’s day job, so to speak, is as half of the James Banks team. She and Adam Shulman have been working on the beloved jewelry collection together for over a decade. As they say in Hollywood, the creative collaborators “met cute” on the 2010 movie set of Alice in Wonderland.

Over the years, Heidi has produced jewelry for around 15 movies. Many for the same prop master Douglas Harlocker. “Doug calls when he is looking for something that has an artistic handmade appearance,” explains Heidi.

The process for the Ducal ring began when the prop master was researching the style of the design. “He asked me to send a picture of things I had made from my archives several years ago,” remembers Heidi. “Then he asked me to send them to him. I don’t know if they ignited any ideas for the ring or they just helped get the ball rolling.”

The next step began when Heidi received a beautiful CAD (computer aided design) for the jewel from the prop master.

The ring features the Atreides coat of arms with a falcon on the top. Engraved on the sides are several details including the phrase “Here I am, here I remain” in the language of Atreides people, which looks similar to the lyrical style of Arabic. It’s the kind of nuanced detail that is sometimes found in movie props. The inscription isn’t mentioned in the movie, but the words are uttered at a critical moment by Duke Leto Atreides.

“They had a very specific and precise idea of what they wanted the ring to look like,” explains Heidi. “While the design they sent me had an exacting quality you get from CAD, they wanted it to look handmade.”

Over a period of several months Heidi painstakingly created the rings. Five rings needed to be made as backups for the production. “I don’t work from wax at all,” says Heidi. “Instead, I carve into metal so everything happened in layers. I really had to sit with the design and think about how to tackle it and build it up from flat sheets of metal.”

In order to make the falcon look important and give it some height, Heidi carved every last feather in layers of copper and silver. The technique resulted in a sculptural, detailed piece. You can see the quality clearly on a television or better yet the IMAX screen the movie was made to be viewed on.

Heidi carefully pierced the letters for the phrase “Here I am, here I remain.” And she handmade the bezels for the emeralds on the side. She used lab grown emeralds in order to have a consistent size and color for all five versions of the Ducal ring. Part of Heidi’s final process was blackening the silver to a velvety color.

When she sent the jewels off to the prop master, Heidi didn’t know the ring would play such a big role in the movie. It is symbolically somewhat like a crown. The person who wears the Ducal ring is in power.

When the movie wrapped Oscar Isaac kept one of the Ducal rings as a piece of memorabilia from the experience.

Oh, and for you purist out there, I know what you are thinking. Most seal rings are carved in reverse to leave a positive impression on wax. But this is Hollywood and those kinds of intaglios would not have had the same impact on the big screen. Let’s call it creative license.

What Is Angelina Jolie Wearing on Her Chin?

Jewelry Is Part of the Action in ‘No Time To Die’