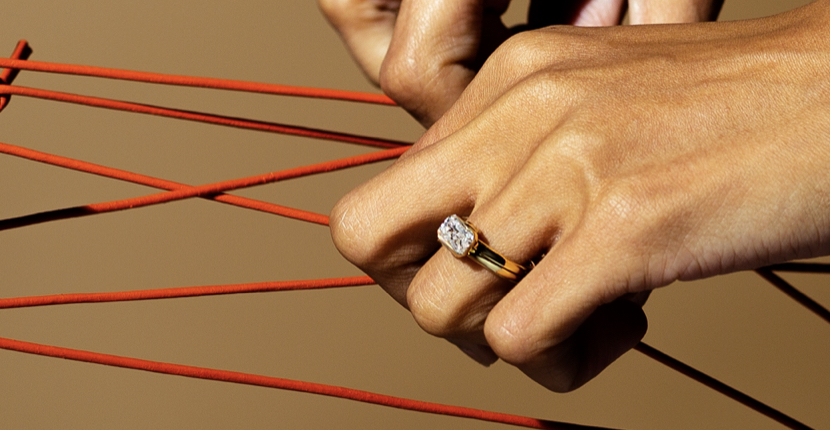 September 24, 2021—At first glance you might think the engagement ring in the photo above was a stunning modern minimalist style. And you’d be right…and wrong. There are historical roots to the design and romantic secrets. It is part of Marla Aaron’s new DiMe Siempre engagement ring collection.

The designer who is known for her locks, which look and function like actual carabiner clips and are worn as charms or necklace clasps, has adapted her fascination with mechanisms to the engagement rings. “According to my parents, I have always been obsessed with little weird objects, hardware and how these things work,” explains Marla. “I apply those ideas into jewelry.”

Much in the same way Marla’s locks are inspired by a real-life object, her engagement rings take design cues from a pre-existing creation. But this one cannot be found in a hardware store.

Gimmel or Twin rings, which were popular from the 14th to the 17th century in Europe and often worn as engagement rings, gave Marla the idea for DiMe Siempre. The historic jewels were composed of two rings that fit together like a puzzle. On the interior of the gold rings there was a secret message in enamel. One favorite phrase for the rings came from wedding ceremonies, “What God has joined together let no man put asunder.” It echoed the couple’s union and the joining of the two elements of the jewel.

The puzzle part of the Gimmel rings as well as the secret message appealed to Marla and she made a collection of gold band rings called DiMe inspired by the idea. “I wanted to bring back a simple version of the Gimmel ring,” explains Marla. Blake Lively, who is a collector of Marla’s work, has one with diamonds.

The engagement ring collection began after Marla contributed a spin on her DiMe rings with a solitaire to the Ten/Ten Engagement Rings collaboration featuring diamonds from Botswana.

One of her ideas for making a complete engagement ring collection came after seeing the ball clasp on a vintage change purse. (Yes, I said a change purse!) Marla and her craftsmen recreated the way the clasp opens in the Kissing Spheres ring set with two faceted sphere-shaped diamonds.

Marla played around with solitaire diamond designs for the collection. It includes an oval shaped diamond in an east-west setting. There is a marquise-cut diamond at a jaunty angle.

There is also an over-the-top ring with giant gems in the DiMe Siempre collection called the Love Machine. It centers on a large sugar loaf shape sapphire flanked by two diamond side stones.

Underneath each of the center stones there is a flat clasp with a lever. It holds the two parts of the ring together and keeps the message a secret.

“It took about a year to work out the mechanisms,” explains Marla. “There was an enormous sense of pride with the team who are all based here in New York when it was done.”

The secret message on the interior of the rings can be anything a couple likes as long as it fits in the space. With Marla’s expert hand engravers, the length is usually around 65 characters, but they can on occasion work out more.

“One client requested a pretty long lyric from a 1967 song by The Association,” says Marla. “You wonder if this heart of mine, Will lose its desire for you. Never, my love, Never, my love.”

Marla designed special boxes that are very different than classic ring boxes. They allow for the jewel to lay open with the secret message exposed and visible to the person who receives it during a proposal.

Since the information of the 4Cs and qualities of a gem not to mention the personal excitement of making the big commitment associated with choosing an engagement ring can be a lot for a couple to absorb, Marla also did something I don’t believe any other jewelry designer has ever done before. She had a friend of hers at Casa Bosques Chocolates make special chocolate bars with a space on the package to take notes. And if the client so desires, they can take a break and enjoy the treat.

Oh, and if you are wondering what the name DiMe Siempre means, it is an intimate form of the phrase “tell me” in Spanish reserved for people you know well. Like everything in Marla’s collection, it reflects her personal passions. A native New Yorker, she became fluent in Spanish as an exchange student in Argentina and later worked in Spain for five years in the magazine business.

For the time being, Marla Aaron’s DiMe Siempre engagement rings are only available by appointment in her delightful new showroom on 47th Street in New York City.