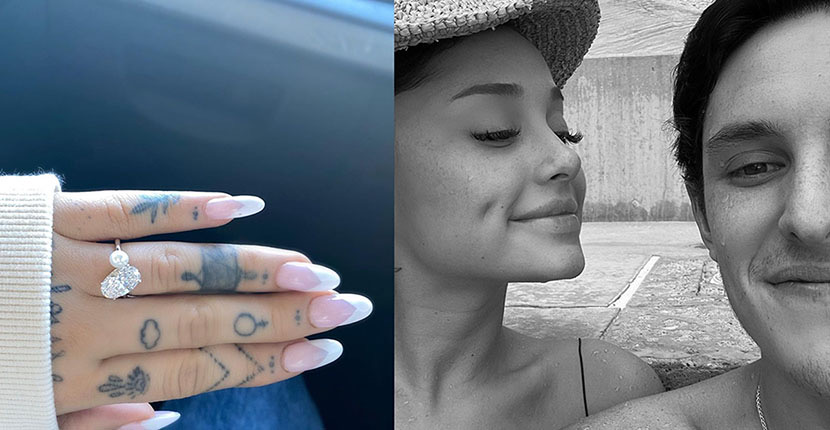 December 22, 2020—You’d have to be living under the proverbial rock if you somehow missed the news Ariana Grande is engaged. The announcement from the singer swept through social media and in 24-hours became one of Instagram’s most liked posts of all time with over 15 million likes.

Who’s the groom? In 2020 parlance, the pop star became betrothed to her quarantine companion, Dalton Gomez. He is currently a luxury real estate agent and used to be a dancer. The couple seems to have met through mutual friends. By all accounts, they began dating in January.

In May, Dalton appeared in Ms. Grande’s music video for her duet with Justin Bieber “Stuck With U.” And then on August 7, Ariana wished Dalton happy birthday on Insta with a gallery of photos.

Beyond these moments during the course of their romance, things were kept pretty low key and out of the public eye.  So, the engagement announcement was something of a surprise. 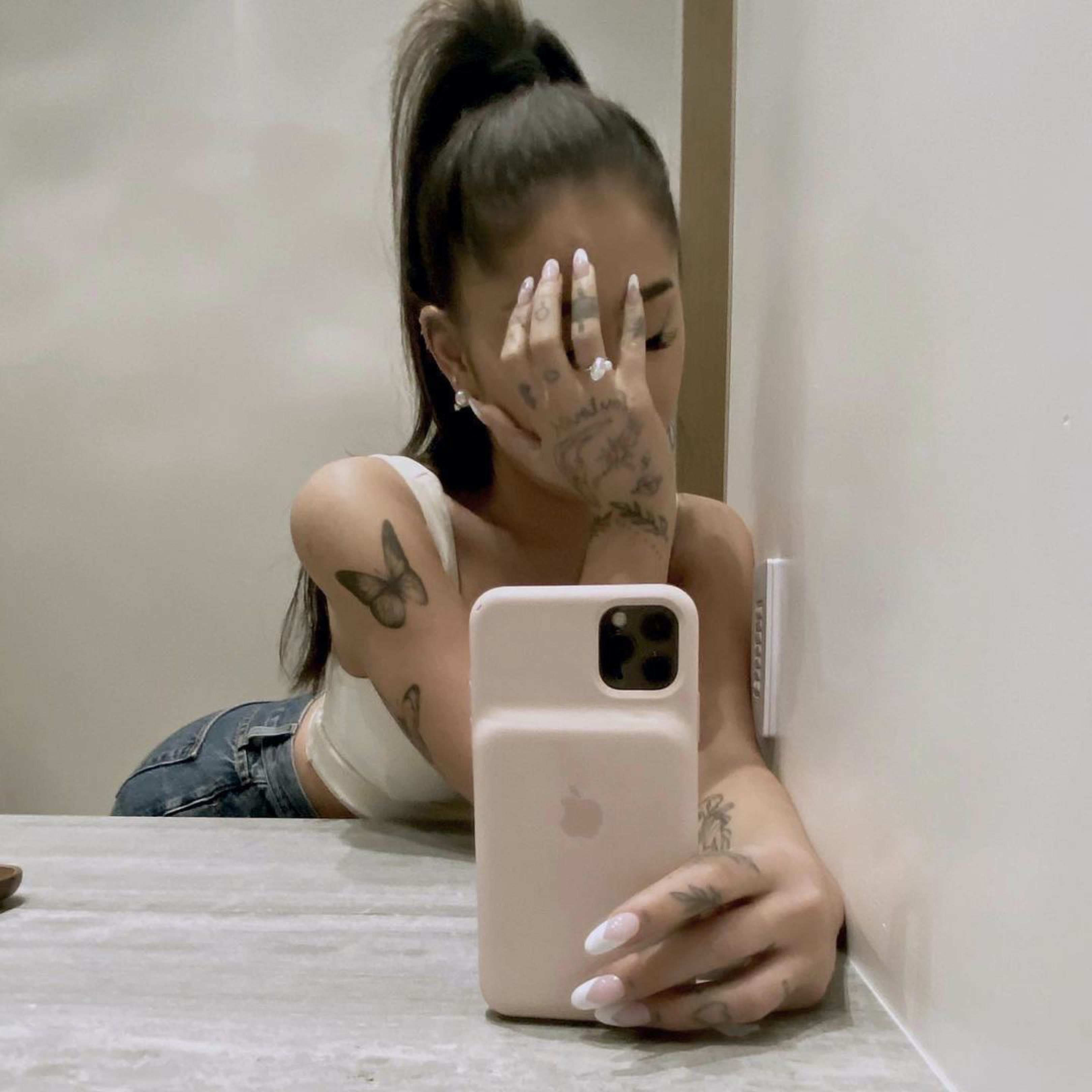 What’s the story with the engagement ring? There is a lot to say about this stunning jewel so let’s begin with the physical description. It has an oval shaped diamond set at an angle and a pearl alongside it. The mounting appears to be a white metal and is most likely platinum.

How big is the diamond? The exact carat weight of a celebrity’s diamond ring is rarely revealed. This results in guesswork on the part of journalists and jewelry experts including yours truly.

The diamond in Ariana’s ring it should be noted is beautiful. You can tell the quality in the photos.

It is also a nice size, but by celebrity standards it is not “massive” – as several major media outlets have reported. Some jewelry experts have guessed the gem is around 5 to 7-carats. I think it is probably closer to 5 carats. It could be even smaller.

It is important to keep in mind when looking at a celebrity’s jewels in photos the size of the person. Ariana Grande is very petite at just 5-foot-3-inches tall. A 5-carat diamond is going to look a lot bigger on her than it would on a more statuesque star.

Overall, the smallish size of Ariana’s ring fits in with the trend for understated styles chosen by stars such as Jennifer Lawrence, Rooney Mara and Emma Stone. 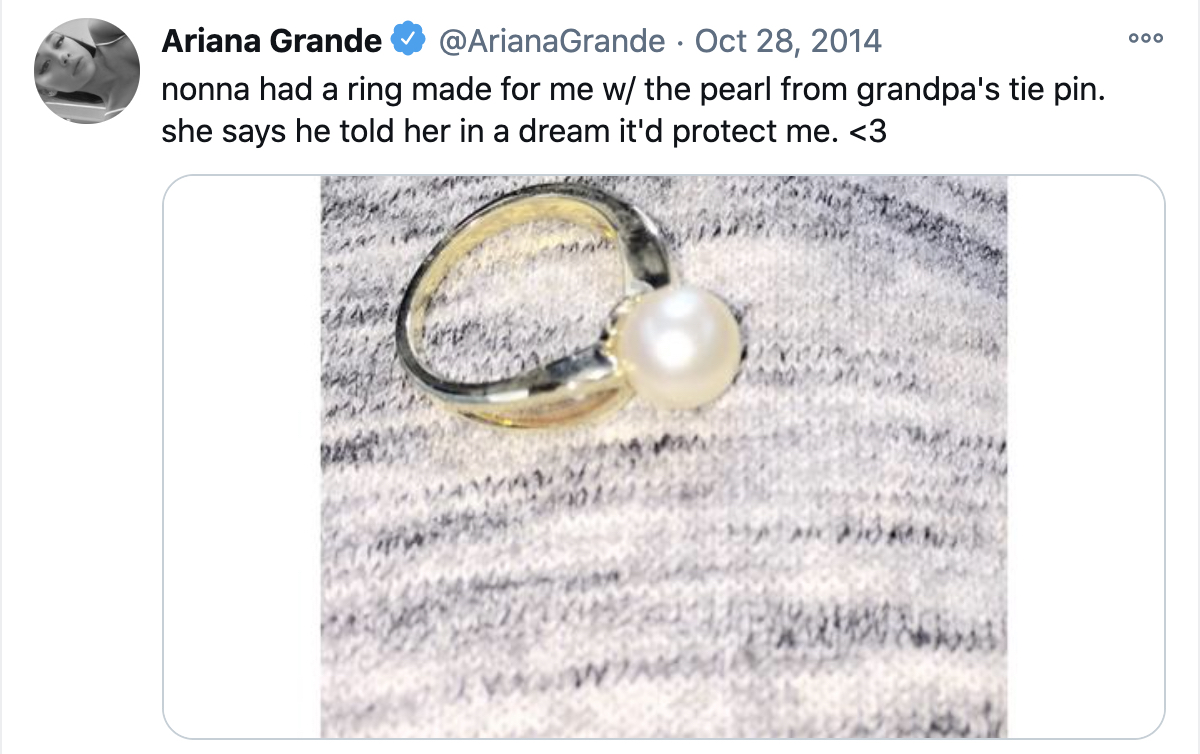 The pearl ring Ariana Grande received from her grandmother set with a pearl from her grandfather’s tie pin. Photo via Twitter @ArianaGrande

What’s the story with the pearl? Grande’s eagle-eyed fans, the Arianators, believe the pearl in the ring was a remount of the pearl in a ring her grandmother had made for her in 2014. Ariana said in a Tweet with a picture of the jewel that the pearl was from her grandfather’s tie pin and her “Nonna” had a dream that it would protect her.

Some folks are upset she remounted the pearl from the sentimental jewel. To them, I say calm down. Remounting stones does not remove the sentiment attached to them. Plus, Ariana is obviously going to wear the pearl more frequently as an engagement ring.

It is also worth noting, Ariana’s June birthday makes pearl her birthstone. She is clearly a fan of the gem and often wears it. Her pearl stud and diamond stud earrings by Nicole Rose are a signature jewel.

Why are experts upset Ariana has a pearl in her engagement ring? The mini trend for pearls in celebrity engagement rings—Emma Stone and Michelle Williams both sport them—upset experts because the marine gem is not durable.

Pearls are scientifically considered “soft.” On the famous Moh’s scale of a mineral’s hardness a diamond is a 10. Pearls are a 2.5. They are near the bottom. By comparison, talc is a 1.

Pearls can be easily scratched or abraded. Pearls can also be damaged by a long list of chemicals including hairspray, perfume or makeup.

Pearl jewelry usually comes with directions about how to care for it because it is so sensitive. The idea of wearing a pearl every day in an engagement ring makes experts cringe because there is such a high risk of damage.

As much as I love pearl rings, I wouldn’t recommend one to a friend for an engagement ring. But I suspect like most celebrities, Ariana will eventually have a suite of wedding bands and possibly another engagement ring. In other words, she may not wear the jewel all the time. In addition to the fact that in her glam lifestyle, she probably comes across less risky situations to her ring than most of us would. 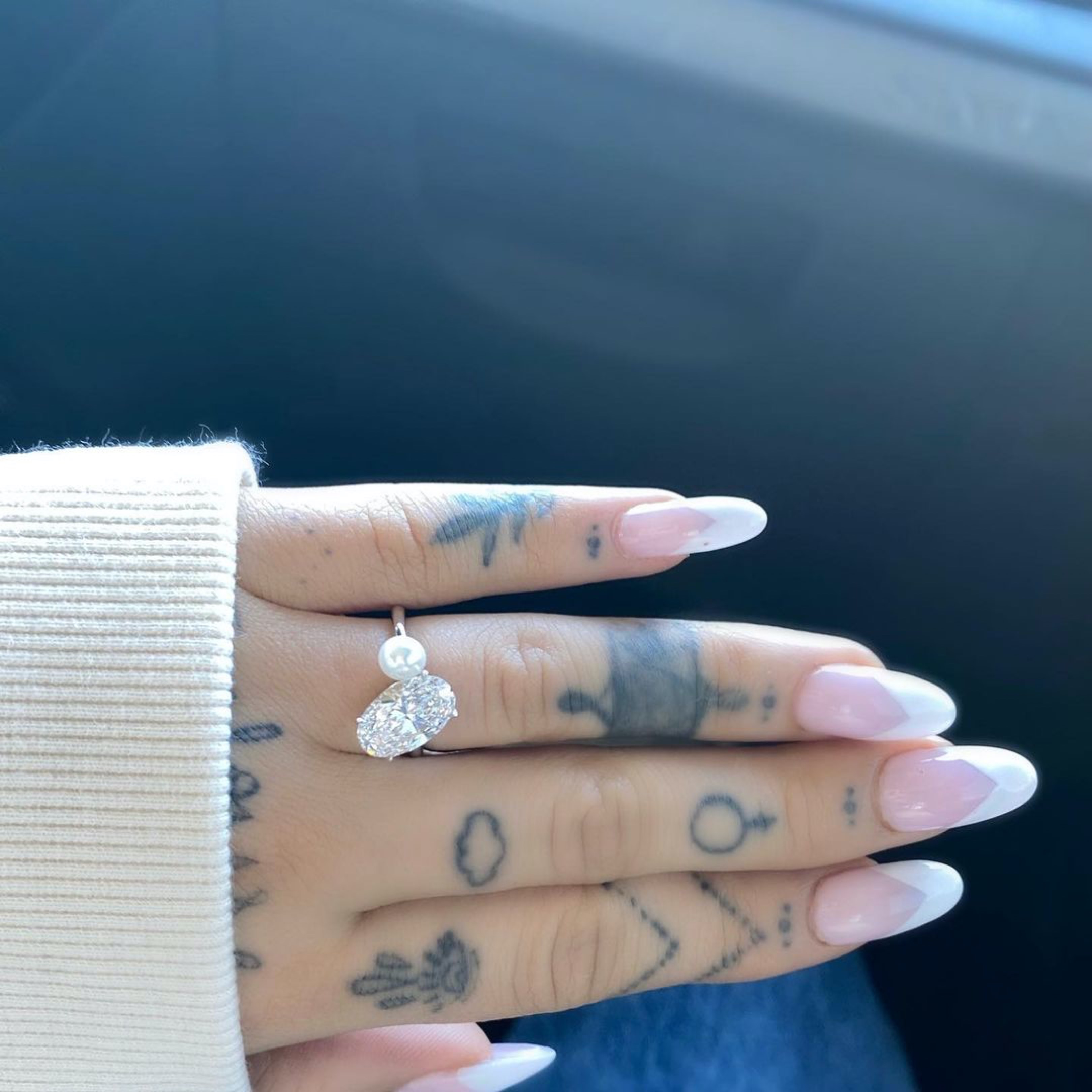 So, who made the ring? Solow & Co., the same design house who created Hailey Bieber’s ring, made this jewel. The groom himself revealed the name in his private Instagram. The facts were made public on the jeweler’s account @solowco when they regrammed the image with the credit.

These Engagement Rings Are A Perfect 10