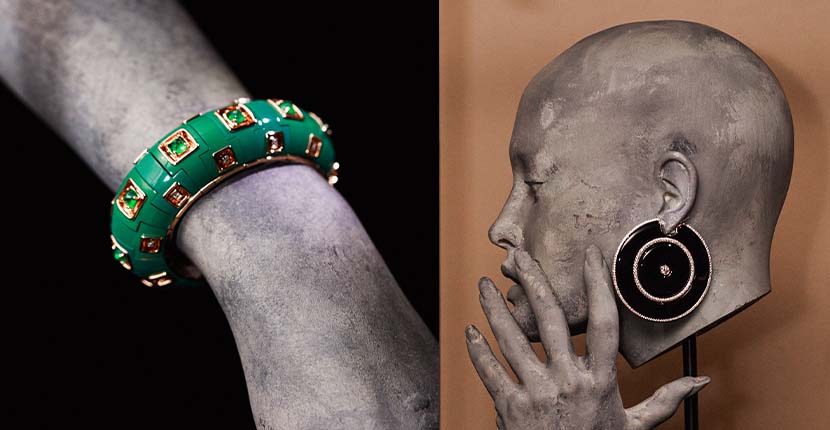 These Jewels Are the Art Deco Tribute We Needed

W. Rosado’s new collection imaginatively links the past and present

December 16, 2021—The 100th anniversary of the 1925 Paris exposition, that formally launched Art Deco, is on the horizon and designers are already jazzed about it. But the thing is most people are looking to classic Art Deco. The diamond wide bracelets, pendant earrings and sautoirs set with geometric shaped gems. Really, they are thinking of the Hollywood idea of Deco. I love it as much as the next person, but there was a flip side of the classic glam I also adore.

W. Rosado’s new Tribu collection reminded me of the latter. More on that in a moment. First let’s review who the revolutionary Deco designers were and what made their work so different.

Jean Dunand, Georges Fouquet and his son, Jean, as well as Gerard Sandoz were—like all the Deco designers—trying to make a break from the royal styles that had a strangle hold on jewelry for so long. Yet this group of iconoclasts approached the idea of modern jewelry differently. They inserted unexpected materials into their fine jewelry such as wood, string, lacquer and enamel. And they worked on a grander scale.

To explain to the public what they were doing Georges Fouquet, who was president of the jewelry group of the 1925 Exposition des Art Décoratifs et Industriels Modernes, wrote almost militant stories about what aesthetics should be in order to bring change to the jewelry world.

He felt the jewels most likely to endure were not ostentatious displays but those associated with materials used for their beauty. “They are first of all, works of art rather than financial investments,” said the jeweler.

Georges Fouquet’s son Jean, who was among the creative circle that included Le Corbusier was equally adamant. On style he once said, “A piece of jewelry must be composed of parts that can be understood from a distance, miniatures are detestable.” African art and modern technology, the ying and yang of contemporary culture in the post World War I era, were masterfully mixed together in Jean Fouquet’s ebony and chrome collection.

Wilfredo Rosado worked in the same avant garde spirit on the jewels in Tribu, which means tribe in Spanish, Italian and French and reflects his affinity for global culture.

In the mood board of his mind, Wilfredo was thinking about the Art Deco lacquer decorative objects of Jean Dunand who also dabbled in jewelry. The jewels and strength and signature red and green colors of the majestic Maasai tribe played into his thinking. Luxurious Japanese lacquer was also part of Wilfredo’s ideation process.

How those elements melded together and translated into new jewels shows a creative designer at work.

Oversized earrings in a hoop silhouette, massive bracelets, giant circular pendants suspended from colorful cords and sculptural statement rings make up the 11 limited edition pieces in Tribu. While the scale is supersized, the jewels are relatively light in weight because they are mainly composed of non-traditional materials for High Jewelry: titanium, aluminum and bronze.

The surfaces are impeccably covered in nano ceramic, a color-adhering technique. This material brings bold red, green, black and aubergine to the jewels. Diamonds, rubies and Muzo emeralds highlight and dramatically punctuate the pieces. Gold and diamond hoops in various sizes jiggle off the bottoms of the pendants and one pair of the earrings.

The pieces are produced in Italy by Wilfredo’s master craftsmen. “I design with the highest level of craftsmanship and technique because I believe my clients appreciate and expect that in every aspect of their lives,” the designer explains.