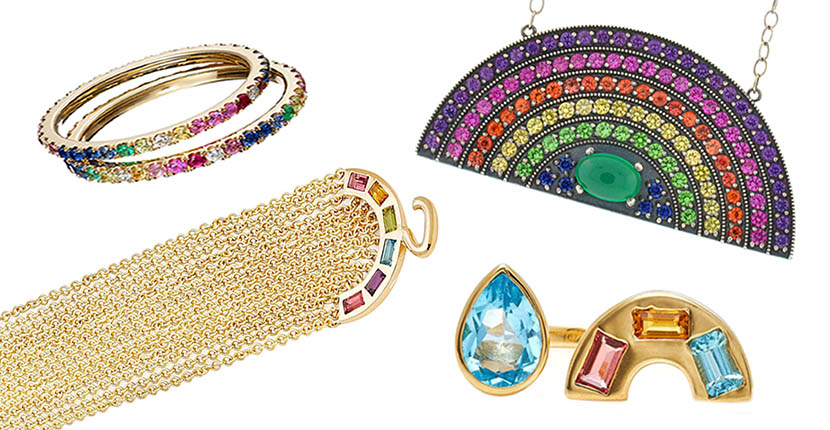 In Celebration of Pride: Rainbow Jewels

The designs echo the joy of the gay pride flag 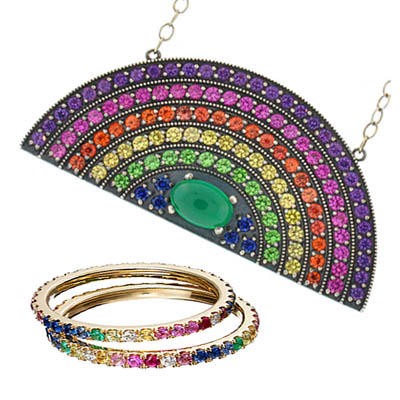 When same sex marriage became legally recognized in New York under the Marriage Equality Act in 2011, Rainbow Flags filled the streets in the West Village where the gay rights movement began in the city. The Rainbow Flags also flew all over social media.  At the time, I remember thinking the joyful symbol was such a genius way to unify the cause. Apparently, it was designed to do just that.

In 1978, activist Harvey Milk asked San Francisco based artist Gilbert Baker to make a gay pride flag. The rainbow colors were intended to represent the diversity of the LGBT Community. It has not been confirmed as absolute fact, but I like the story that Baker was inspired by Judy Garland’s signature number in the Wizard of Oz, “Somewhere Over the Rainbow.”

Parallel to the growing political success and widespread acceptance of the Pride movement, the rainbow has also grown in popularity in fashion and jewelry. The innocence and childlike quality of the rainbow are in-line with widespread popularity of millennial pink.

“I feel like the rainbow is for anyone in need of something to hold on to,” explains designer Soraya Silchenstedt.  “It gives us a glimmer of hope and other worldly magic when everything else might be seeming to fail us.”

Soraya’s delicate rainbow eternity band started off as a special commission for a client who wanted a design including her birthstone and her two children’s. “I just kept adding gems and suddenly it was a rainbow.” When the piece went in to Soraya’s collection, many of the people who ordered it had very special reasons for wanting it.  There was an art teacher who taught the color wheel to kids and someone who wanted a reminder of their grandmother.

“I just love that so many people identify with the rainbow in such different and personal ways,” says Soraya. “And I am glad it could also be chosen as a symbol for Pride. My half-brother was gay. He was 21 when I was born. He had piercing blue eyes and was so handsome. Robert lived in the East Village, travelled with a band and worked at the Mudd Club. He always came around and would make me laugh until my stomach hurt. There were few people from my childhood as loving and affectionate as him. In 1988, Robert was diagnosed with AIDS and passed away soon after. As a child, it never crossed my mind that there was anything wrong or different about being gay, but I was naive. As I got older I started to see. It breaks my heart that we live in a world where there is still so much hate, inequality and ignorance. It is more important now than ever to show the LGBT community support and compassion.”

Wonder Woman Isn’t the Only Badass to Wear Big Cuffs

The Imaginative Earrings Shown At Couture