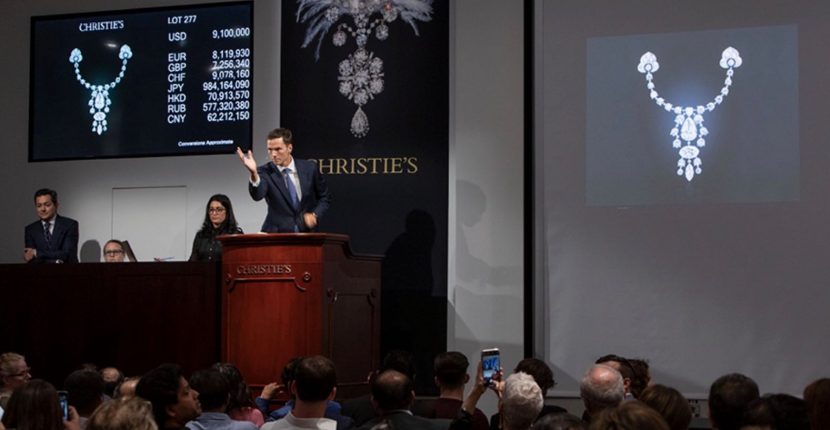 Auctioneer Max Fawcett hammers down the top lot of the sale, A Belle Époque Devant-de-corsage, by Cartier, Paris, 1912, which sold for $10,603,500. Photo Christie's

In the Auction Room for The Al Thani Sale

June 20, 2019—What you don’t see watching an auction online or viewing the sales results are the personalities in the room. You don’t feel the mood and momentum. It’s a rare experience nowadays in New York to have the opportunity to do so as the big dealers and collectors usually bid over the phone or online just for the items they want. Most of the really important sales happen in Geneva, a city where people fly in to inspect the treasures and stay in the auction room for the event. Christie’s Maharajas & Mughal Magnificence auction of items from The Al Thani Collection was the first time since Christie’s sale of The Collection of Elizabeth Taylor in December 2011 for a serious international turnout in New York.

Unlike the Elizabeth Taylor event that happened at night and over a series of days, the MMM auction took place over the course of one epic 12-hour session in Christie’s sales room at Rockefeller Center on June 19, 2019. It was packed to standing room only when the auction began at 10am because the sale was unusually front loaded with treasures. They started with lots of big items early to accommodate an international audience and the time differences around the globe. There were registered bidders from 45 countries on 5 continents.

Lots of familiar faces and power brokers from the jewelry scene were in attendance. The legendary dealer and collector Ralph Esmerian, who once owned a couple of the Cartier Art Deco jewels, swung by for a glimpse of the action. One of Beyoncé’s favorite designers, Ofira, watched the proceedings for a few hours. Pat Sailing who is known for her extraordinary taste stayed for the duration of the sale. One of the new wave of amazing vintage dealers, Martin Travis from Symbolic & Chase, flew in from London. There were also large groups of dealers and a couple of collectors from India who were actively bidding from beginning to end in order to bring patrimonial pieces home. 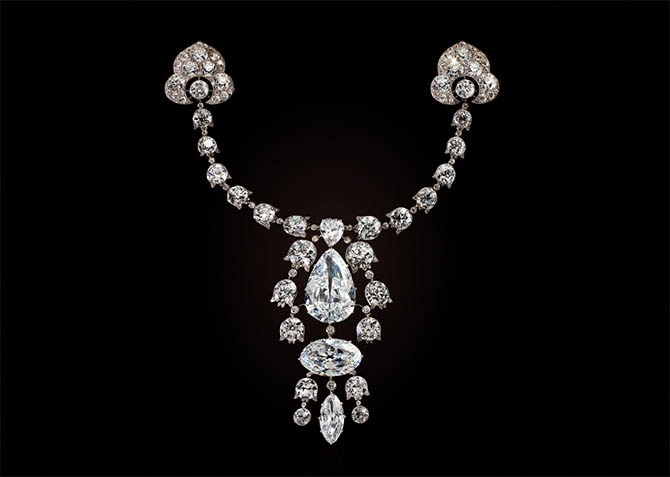 The top lot at the Christie’s Maharahjas & Mughal Magnificence auction, a Belle Époque Devant-de-corsage, by Cartier, Paris, 1912, which sold for $10,603,500. Photo Christie’s

Lots of action came through the phone banks, but there was also more than the usual bidding right in the room. One of the most charming moments early on came when a beautifully dressed Indian gentlemen allowed his young daughter who looked to be about 10-years old raise his paddle several times during a mini-bidding war over one of the miniature paintings. When she started her bidding the group of specialists at the elevated podium in the front had to point her out to the esteemed auctioneer and International Head of Jewelry, Rahul Kadakia, who could not see her at first from his perch at the podium. Then he endearingly proceeded to refer to her as “Mademoiselle” for follow-up bids. Unfortunately, she did not win the prize but she left an indelible and delightful impression.

Some of the bidders in the room carried on exactly as you would imagine in the movies. Their gestures towards the auctioneers were so subtle, a nod or gentle wave of the hand, that I would not have known they were in on the action if I hadn’t been seated very nearby. Some who were in the room actually did their bidding more or less privately on their computers in 21st century style. Others were more dynamic in their exchanges. One private collector delightfully and openly, chatted with the 5 auctioneers who ran the sale in shifts during the course of the day while he was bidding on and acquiring some of the most important pieces. The top lot went to that private. It was an exciting moment to see when he acquired the Cartier-Paris Belle Époque Devant-de-corsage for $10,603,500 from auctioneer Max Fawcett who made his dazzling debut at the podium during this sale.

In the end, the Maharajas & Mughal Magnificence sale did not exceed the $115.9-million total value of the Elizabeth Taylor Collection, but it came remarkably close. The auction achieved $109,271,875. To find out about the top lots visit here at Christie’s.com.

Who Is Sheik Al Thani and Why Is He Selling His Jewelry?

Indian Jewels Ignite The Dreams Of An Author