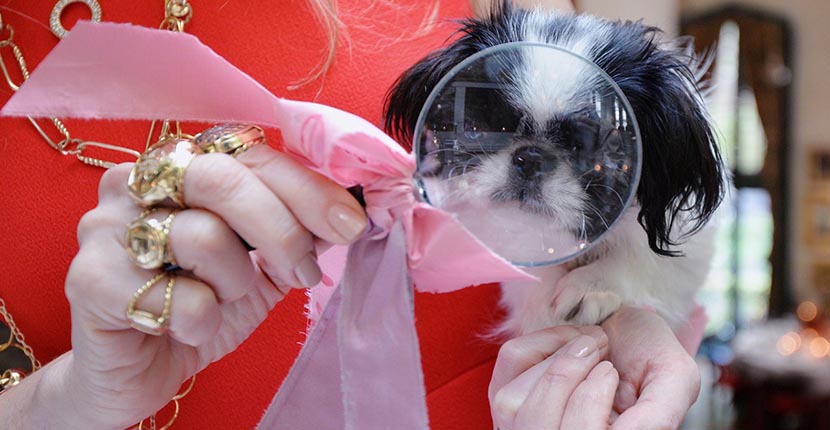 If you look down at your phone for even a second when you are walking by Laura Lobdell’s boutique at 183 1/8 West 10th Street in New York City, you will miss it. The designer’s adorable flagship is tiny and narrow. I am pretty sure it’s the smallest jewelry boutique in Manhattan. It’s also one of the most joyful retail locations anywhere and now I think it’s safe to call it something of a West Village landmark.

This holiday season marks the 10th anniversary of the Laura Lobdell boutique. To celebrate the milestone Laura took the party uptown to the private room at La Grenouille located at 3 E. 52nd Street. She explained during the festivities, the historic space was built in the 1860s and was once the home of noted French artist Bernard LaMotte. During World War II, the author of The Little Prince Antoine de St. Exupery, who shares a birth date with Laura, stayed in the townhouse with his friend and wrote parts of his celebrated novella.

“It is truly useful since it is beautiful,” one line from The Little Prince Laura shared with her guests really summed up the sentiment so many of us feel about jewelry and the arts. 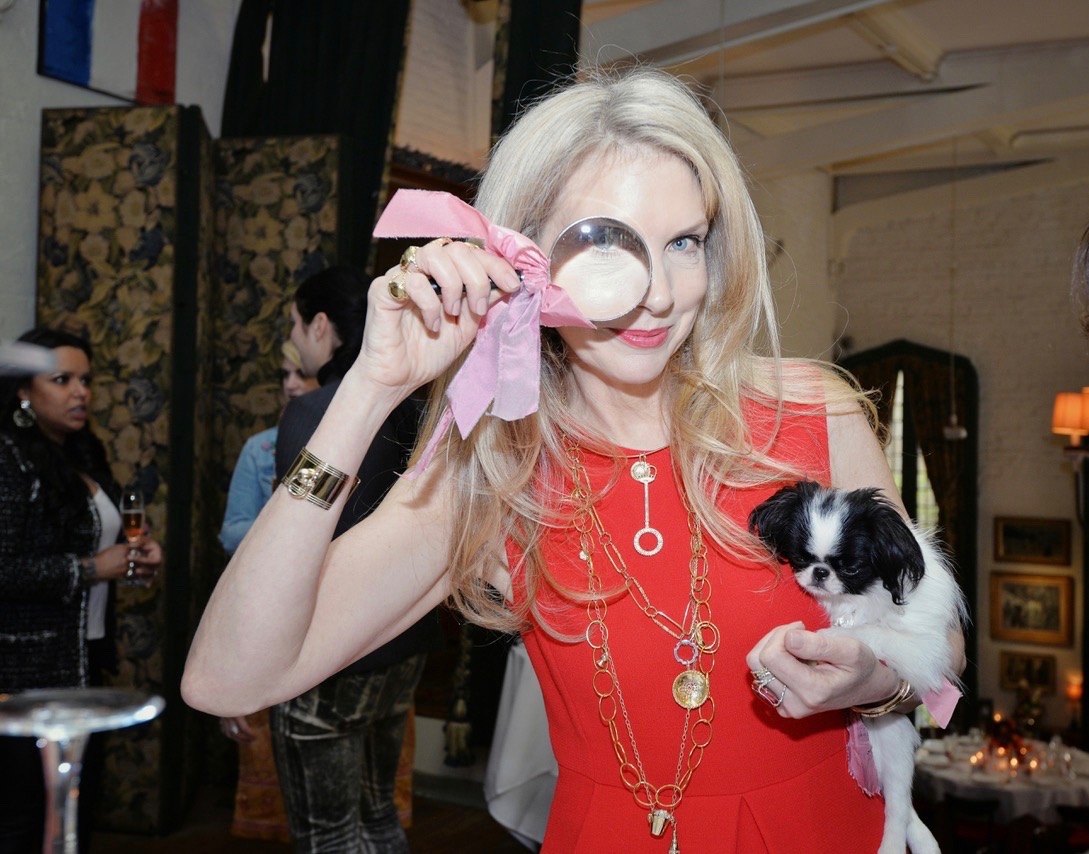 Jewelry designer Laura Lobdell holding a magnifying glass and her dog Foo at her 10th anniversary party. She is wearing a Bubble Wand necklace among many other of her designs. Photo courtesy

For the event Laura also introduced a deluxe new collection of her Champers rings, handmade jewels in the shape of the wire cage and cover that fits over the cork on a champagne bottle—officially called a muselet. The designs were all engraved with Laura’s favorite places to have champagne. Several of her beloved destinations are in Paris including The Ritz, Caviar Kaspia and Café de Flore. There are also New York institutions immortalized in the Champers rings such as The Carlyle and The Four Season and, of course, La Grenouille. 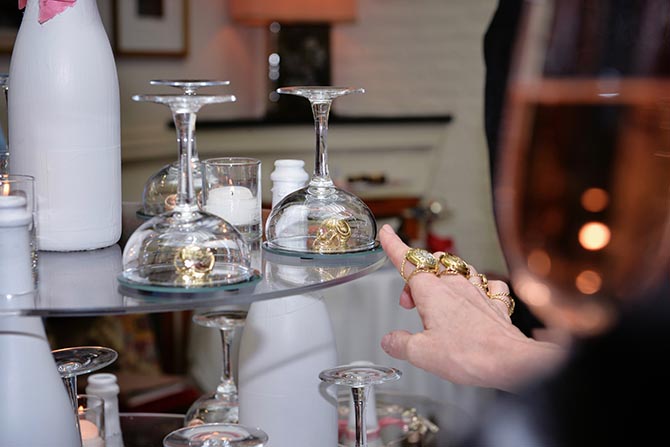 The rings were displayed under coupe champagne glasses on a table. There were plenty of magnifying glasses on hand so that the intricate details of the hand engraving could be enjoyed and reviewed closely by the guests.

After the celebratory cocktail hour toasting Laura’s anniversary, guests sat down for lunch. Each place card was decorated with a glittered Champagne Cork. There were also Bubble Wands at the table for guests to blow bubbles. The magical tools are another one of Laura’s signature jewels. 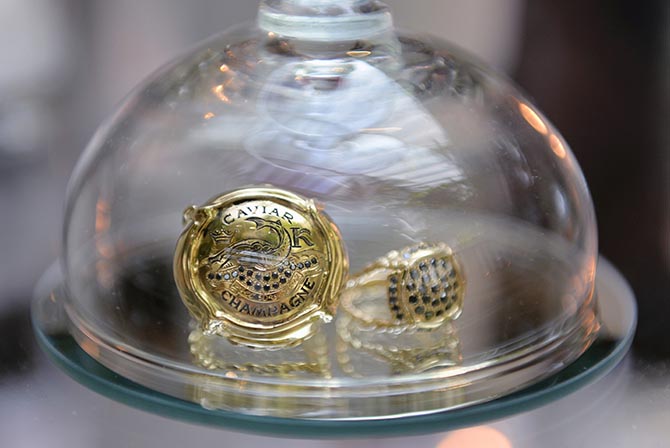 During the course of the meal, guests discussed their favorite Laura Lobdell memories and the special occasions when they had commissioned a one-of-a-kind jewel. There was also a unanimous love for dogs expressed at my table where Laura’s new Japanese Chin puppy Foo joined us for the festivities. By the end of the party we were all talking about where Laura might possible celebrate her next big anniversary. Many of us thought an excursion to Paris to enjoy champagne in the designers favorite places would be perfect. 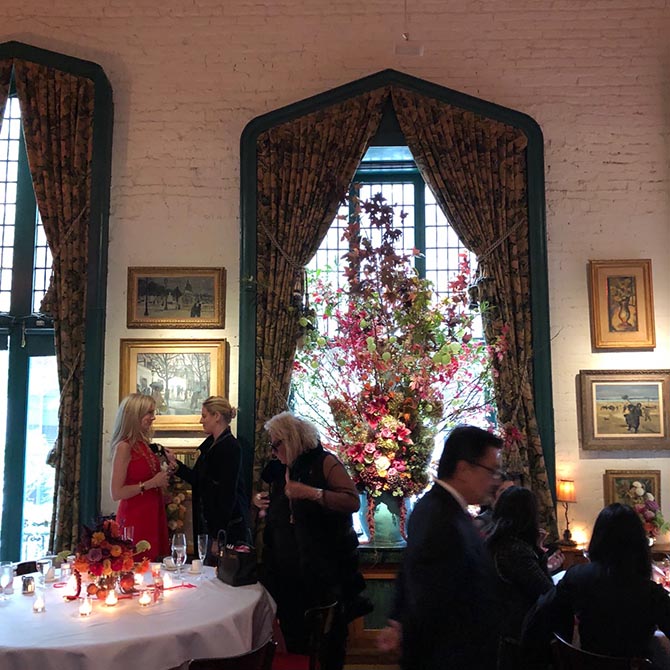 Laura Lobdell and some of her guests before the 10th anniversary lunch at La-Grenouille began. Photo courtesy

The 3 Must-See Exhibits at L’Ecole in New York

Inside Daniela Villegas’s Party at Deyrolle