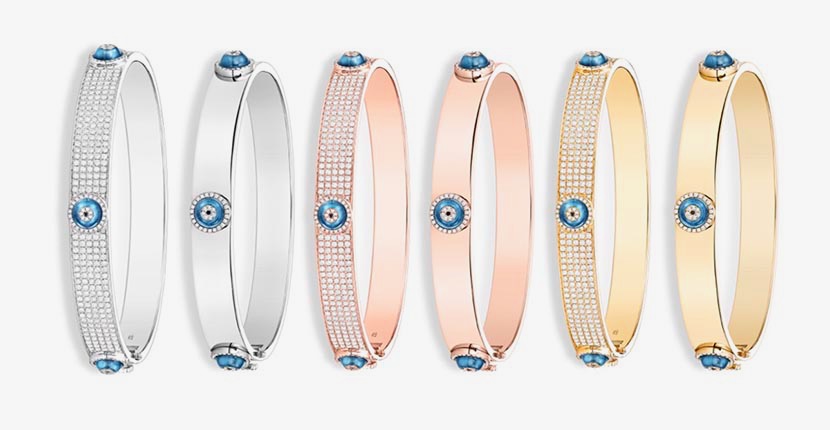 Lust: The Against Evil Eye by Lorraine Schwartz

Lust: to have an intense desire or need: CRAVE

tal·is·man (noun), an object, engraved with figures or characters supposed to possess occult powers and worn as an amulet or charm and whose presence exercises a remarkable or powerful influence on human feelings or actions.

I have a fantasy that one day I am going to find my talisman, buy it and then never take it off.

In my fantasy, this amulet will not only be my symbol but it will magically satisfy all my jewelry lust. I will have THE PIECE and never again yearn for any other with the same desperate need.

Ten years ago, I saw my first AEE collection (Against Evil Eye) bracelet by Lorraine Schwartz. Purported to ward off evil and protect from the attention of jealous souls, it was comprised of a thin line of round diamonds interspersed by topaz and diamond evil eyes. It was quite beautiful but didn’t keep me up at night.

Then last year, in March 2018, I saw a new piece in her AEE collection that did keep me up at night. And still does. I’ve tried it on dozens of times and can’t stop thinking about it. My desire for this piece disturbs me. It’s more than want. More than lust. I have some mystical bond to this bangle.

The bond goes back to my great-grandmother. Born in Paris in the last quarter of the 19th century, Annie Parver came to America when she was a child of 2 or 3. At fifteen she was betrothed to and married a much older Russian Jewish immigrant. She subsequently gave birth to eleven children, nine of whom survived. She died at 93, when I was twenty, so I knew her well.

Grandma Berger, as we called her, was more than a mother and homemaker, she was a self-proclaimed witch and fortune teller. She clandestinely read cards for her neighbors in order to make what she called “pin money” which she then secretly invested in real estate.

I grew up hearing Grandma Berger’s predictions and seeing many came true. Whenever she issued her warnings, we all paid attention. My favorite example is the time she saved my mother’s life.

In 1945, my mother was eighteen years old and had a summer job in an office on the 78th floor of the Empire State building.

Early on the morning of July 28th, Grandma Berger phoned my mother and warned her not to go in that day. She was quite insistent and whenever Grandma Berger insisted, you obeyed. My mother stayed home.

At 9:45 AM Lieut. Col. William F. Smith Jr. was piloting a B-25 Mitchell bomber when he got disoriented in fog and crashed in to the iconic building’s 78th, 79th and 80th floors. Fourteen people died.

Most cultures have an evil eye — Greeks, Turks, Italians and Jews — who call it ayin ha’ra — Not simply folklore, the evil eye is even mentioned in rabbinic texts. Grandma Berger was obsessed with the concept.  She wore a red string on her left wrist to ward off anyone giving her the evil eve.

That morning, she did what she always did when she learned of anything terrible— said kenahora and made a spitting noise three times all while holding onto the hamsa she wore around her neck. When she died, I was supposed to get the silver hand with an eye symbol enameled in its center, but it never surfaced.

Which all brings us back to why I am so drawn to Lorraine Schwartz’s Eye Bangle. It’s in my blood to want it. I even think that if Grandma Berger was still alive she’d give me some of her pin money so I could buy it.

Comprised of gold, diamonds, and topaz, the bracelet comes in either yellow, rose, or white gold. I’d take any of them. And I am certain that if I owned it, I’d put it on and never take it off and magically not only would I be protected from evil, but from lust too.

Shop The Hottest Jewelry Trends For The Holidays