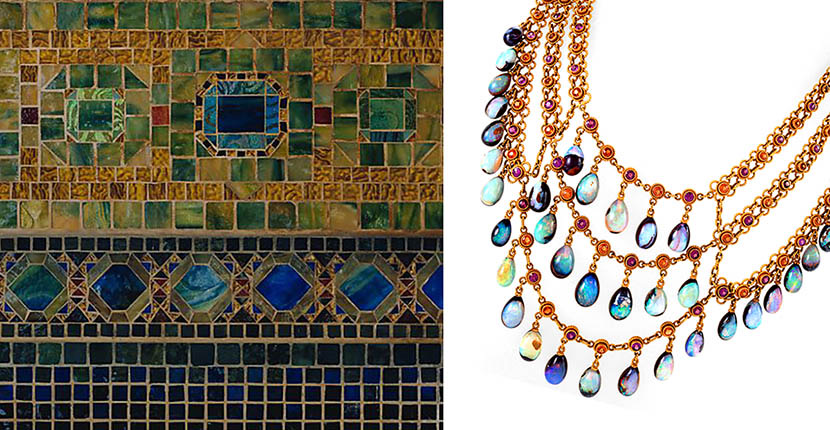 An opal and gold necklace from Macklowe Gallery and a detail of Louis Comfort Tiffany’s opalescent Garden Landscape. Photo courtesy

Lust: to have an intense desire or need: CRAVE

I fell in lust on Instagram. One look at this opal and gold necklace and I felt that old familiar craving. I had to know more. I messaged the person who posted the photo of the necklace, but she didn’t remember where she’d seen it. So, I took a screen shot, put it in my own feed asking if anyone knew where it came from and something about its history.

Within hours Hillary Macklowe of Macklowe Gallery messaged me that they owned the necklace. I couldn’t wait and went to visit it just two days later. When Hillary brought the piece out on a black velvet stand, I literary gasped. I’d had no idea from the photos how truly unusual the opals were.

As soon as I put the necklace on, I immediately began trying to figure out what I owned that I could sell in order to buy the piece. It looked perfect against my black round-neck silk blouse. Would look even better with a black cashmere turtleneck. The necklace is so unusual in every way, I just kept staring at it, touching the smooth polished eggs, examining their color combinations, wanting it more and more. And then my imagination kicked in. 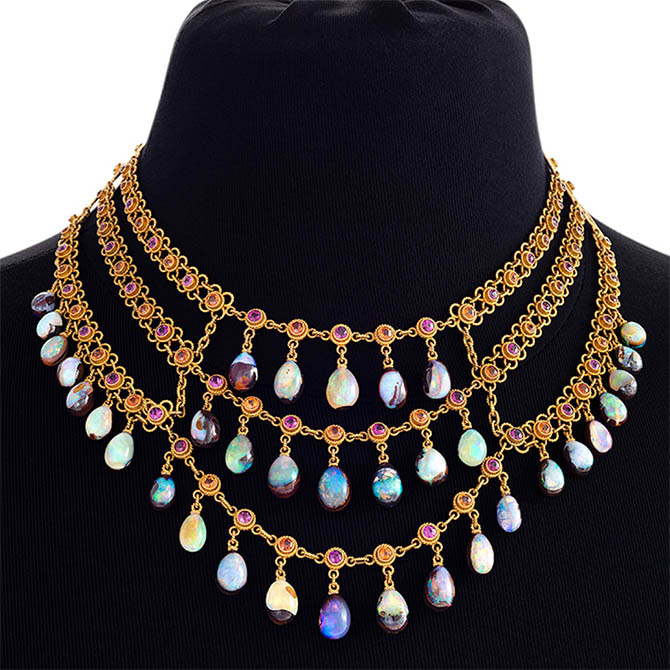 I find it almost impossible to try on an estate piece without wondering who owned it and what its story was.

This necklace is so unique and unusual, I decided it must have belonged to an equally unique woman especially given that it was made — and worn — in the first quarter of the 20th century. Maybe she was an artist herself or a perhaps collector because she must have had quite an eye to appreciate all of the necklace’s subtly and specialness.

Yes, the piece is graceful and substantial, but it’s the color and contrast of its parts that make it so rare. Someone with a trained eye would have appreciated that each egg is different as opposed to being more conventionally matchy-matchy. Someone who understood the nuance of color would have appreciated the contrast of the different hued garnets that pick up the warmth of the gold work and color play of the opals.

As I examined the piece in the mirror and saw the smooth stones dance when I moved, I imagined that the woman who’d owned the necklace had loved opals since she was a child. Perhaps her grandmother had one—a deep blue green opal set in a pendant. As an adult, my fictional owner never passed a jewelry store without stopping to look in the window to see if any of the magical stones were on display. Whenever her husband asked what she wanted for a birthday or anniversary she replied “an opal” but he never found one special enough for her. Until that day when he walked into Tiffany & Company’s store on 37th Street and discovered her perfect gift. Not just one opal but 35. Not just one color palette but dozens —aquas and lavenders, cobalts and limes, deep reds with orange flashes.

The Macklowe Gallery has not been able to confirm the actual maker of the necklace. Since there are no markings, there’s no way to verify the jeweler, but the experts agree that it looks to be a Louis Comfort Tiffany piece from about 1900. Very possibly it was designed by Julia Munson, who created many pieces in the LCT studio. But while it has details that conform to other Tiffany jewels, at the same time it is like no other. Very possibly as unique as the woman who wore it once upon a time and the next woman lucky enough to add it to her jewelry wardrobe.

A New Book Covers Jewelry Terms From A to Z