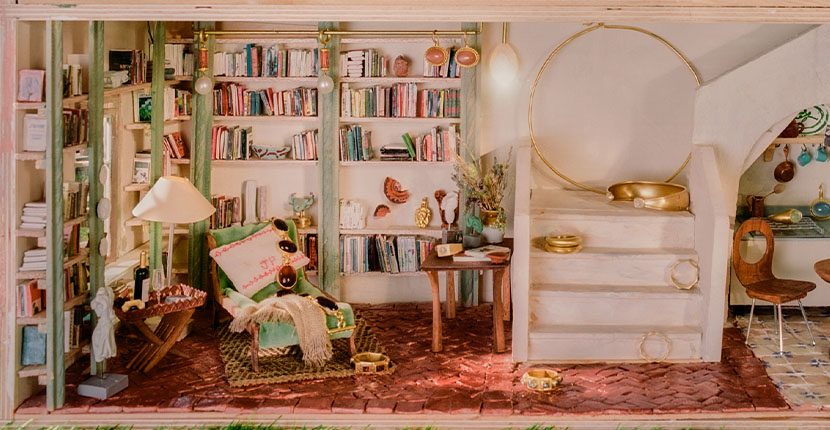 Detail of the ground floor of Palazzo Prounis designed by Carmen Mazarrasa in collaboration with Jean Prounis and decorated with Prounis jewels. Photo Francois Dischinger

December 13, 2021—During the height of the pandemic, jewelry designer Jean Prounis chanced upon the work of miniature artist Carmen Mazarrasa who is based in Madrid. It wasn’t long before the two women started collaborating on Palazzo Prounis, a little dollhouse of a design that would ultimately become a showcase for Jean’s jewels.

Both women are masters of their crafts. Their combined talents made for a pandemic project to beat all pandemic projects. Jean is a goldsmith who practices ancient techniques. While Carmen is a design obsessive who meticulously produces miniatures with magnificent details. All the books on the shelves are based on real volumes. Her lush fabrics include Fortuny.

The enchanted Palazzo Prounis belongs to Edith who is a green tourmaline and 22K gold Turris ring and a “staunch bohemian.” Her personality, and the details of her surroundings, are brought to life in the little story book that accompanied the Palazzo’s first open house at Dover Street Market in New York last Wednesday night. The delightful party was invigorated by real life staunch bohemians in attendance including Ella Emhoff, Lynn Yaeger and Batsheva Hay.

Unfortunately, the house party at Dover Street Market in New York ends tomorrow, but you can still enjoy the artistry of Carmen Mazarrasa and the jewelry of Jean Prounis in the photos below by Francois Dischinger. The text excerpts come from Edith’s story in the Palazzo Prounis book.

Contrary to persistent rumors, Edith was neither idle nor rich. One would certainly think so, though, if they encountered her on this warm, late afternoon blissfully cloistered inside her most unconventional palazzo, a dilapidated white elephant she had fashioned into a wildly idiosyncratic residence. With her head positioned impishly upon a striped canvas pillow and her limbs lightly tucked beneath an opulent cover sewn from Fortuny silk, Edith formed a vision of insouciant repose atop her centuries old sleigh bed.

Edith’s vast freestanding tub was much like her bank account—frequently overdrawn.

This minor domestic crisis was neither surprising or entirely unwelcome, for Edith’s tub overflowed with regularity. The night is drawing closer, and the present deluge serves to remind her that a dinner reservation is just a few hours away. Hastily, Edith tosses a dress across the sinuous brass room divider, turned off the faucet and placed a crystal decanter full of Santa Maria Novella rose oil nearby. Thus began an inviolable ritual.

Nonna, Edith’s redoubtable grandmother, is fashioning her famously attenuated limbs into a figure of supine splendor upon a chaise lounge in the intimate downstairs library. Tonight she is outfitted in a regal sheath cut from magnificent gold and garnet cloth, a personage of fearless grandeur who nonetheless was in harmony with the simple but self-assured ambience of Edith’s beloved “il Palazzetti.”

Though her presence suggested the old world, Nonna is, in fact, a staunch devotee of the here and now. Edith, who possesses the same ability to inject any room with bonhomie, has inherited this rare sensibility and as such the intimate drawing room is a study in nonchalant sophistication. Here, one is struck by a singular ambience, strands of old and new coalesce in novelistic detail, its components boldly alloyed to animate the home with benevolent sentience.

Downstairs, the modest kitchen is serene, exuding provincial simplicity with stucco painted the color of a conch shell Edith cherished. The lustrous abalone backdrop was arrayed with Edith’s antic take on the domestic gallery wall: Etruscan amphoras of bronze, fancy Majolica bought at auction, chipped family porcelain and a bistro plate she had petulantly stolen from Brasserie Lipp.

Sedrick, her suitor, looks sharp and formidable as a laser-cut stone. He is sipping hot Genmaicha calmly, unconcerned by the music reverberating from upstairs or the intrusive curls of cigarette smoke trespassing from the adjacent room. Visits to this intriguing citadel served to heighten his attract to Edith, his courtly resolve loosening, as if by magic, in response to its peculiar atmosphere. He’d even grown to accept his paramour’s terminal tardiness—an approach she had breezily termed as Mediterranean time—as being just another of her unorthodox, but somehow alluring traits of character.

Appearing as carefree as a Corsican flea market stall, Edith’s granite table is heaped with books, tchotchkes and ephemera. Although an utter failure as a minimalist, she was determined to remain on the right side of that gauzy line that distinguished collecting from hoarding. Control was exerted by marshalling the many curious and keepsakes into objet trouve-like vignettes, each offering the beholder a glimpse into a small world withing a world.

A devotee of literature, film noir and gothic romances, Edith was well aware of the central role of the staircase in most famous houses. But it wasn’t the case here, where the rear scala occupies a protean role as a disheveled gathering place for wayward pets, borrowed sports equipment and scattered works of art.

Edith’s dog Zeus, a German Shepherd, was universally adored. But even he—a most gregarious soul—had grown accustomed to the luxuriant quietude afforded by the palazzo. These days, he was known to skip social niceties and secretly repair to the guest bathroom in search of true solitude.

Why These Prounis Rings Are Right for Conscious Couples