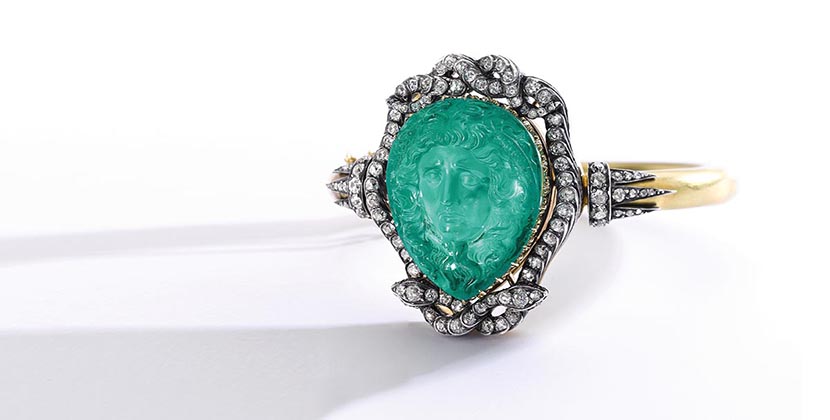 Nicole, Rihanna and Cate have all worn them in the last few weeks

“Cameos are very emotional,” explained Sotheby’s Senior Director Daniela Mascetti. “They are not for someone who is looking for big bling and loads of glitz.” 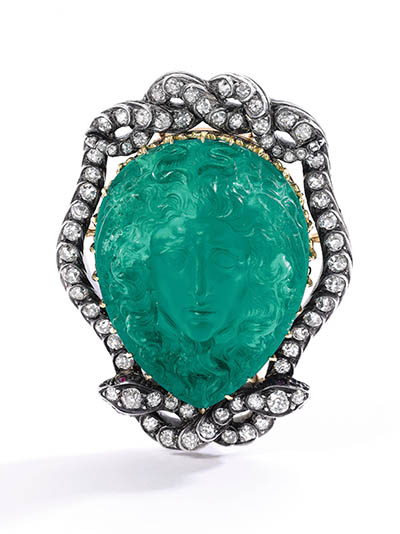 The fine emerald cameo depicting Medusa shown out of the bracelet in the brooch setting with diamond snakes. Photo Sotheby’s

The primary subject of my conversation with the jewelry specialist and esteemed historian was the 19th century emerald cameo mounted in a diamond and gold bracelet, seen here and featured in the Sotheby’s Magnificent Jewels and Nobel Jewels auction in Geneva on May 15, 2018. When the antique was shown in New York, it immediately caught my eye and took me back to the first project I ever worked on in jewelry. Straight out of college, I catalogued a large collection of 19th century cameos. The stories of classical myths, heroic characters and historical figures depicted in the carvings is what made me fall in love with jewelry history.

In the hundreds of stunning cameos I have seen over my career, there was never anything quite like this emerald carved into a Medusa. Over time the carving has not been damaged and the nose is still intact, which is incredible considering the relative softness of emeralds compared to the hard stones—such as agate, sardonyx, onyx and chalcedony—that are usually used in fine cameos. If you are thinking it wasn’t worn. It was. There is sign of regular wear on the bracelet. Daniela describes the carving of the Colombian emerald as “very crisp and bright.” She went on to add, “It is gem quality and crystal clear. It could have been cut into a facetted stone, but someone made the decision to transform it into a cameo.”

Medusa was a popular subject in the nineteenth century cameos. They represented a form of strength and protection to owner. “The look of the Medusa is modeled after the Italian sculptor Bernini’s Medusa made around 1640,” says Daniela. “She has more of sensual appearance than the scary Medusas.”

Since I saw the jewel on April 13, it has lingered in my mind. I knew I was going to write about it, despite the fact that cameos may not be the most popular subject on the old internet. Or as Daniela so aptly put it, “the glitziest.” I was just going to follow my heart on this one. Then something amazing began to happen. I started to see women wearing them. And not just my friends in jewelry. I am looking at you Stellene Volandes.

On April 15 the queen of cool, Rihanna blended in a couple of cameo rings with loads of other jewels at Coachella. But honestly, this wasn’t a total surprise. Riri has been wearing cameo rings ever since Jacquie Aiche started making them. Then boom on April 24 we had a trend. Cate Blanchett put on a cameo necklace and a cream Gucci pantsuit for the CinemaCon 2018 Warner Bros event in Las Vegas. The same day Nicole Kidman attended the Time 100 party in New York wearing carved onyx and enamel cameo pendant earrings from Fred Leighton.

Once these stars aligned in their carved stone jewels, I realized the time is just right for a cameo revival. So many of the carvings feature women or Greek gods. It’s a new spin on the old antiques as a message of female empowerment. All of this of course makes me want to dust off the 19th century cameos in my jewelry box. Then again, making an addition to the collection like one emerald cameo at Sotheby’s would be a dream.