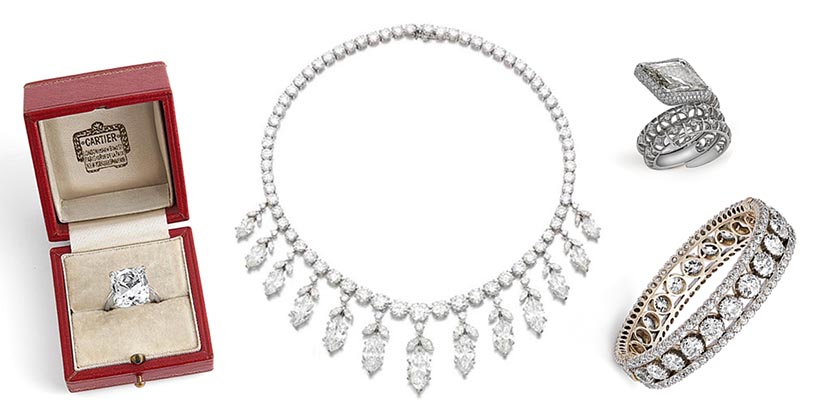 Why Hancocks Is a Must See at Masterpiece

If you are searching for something sensational, one of the best places to look is an international art fair. It has been a great way to shop for treasures literally for hundreds of years. At the grand gatherings, exhibitors bring their best pieces to make certain they stand out among the glittering crowd. One name on my list of must sees at the shows is Hancocks. The London based jeweler has long been one of the brightest stars on the international art fair circuit. 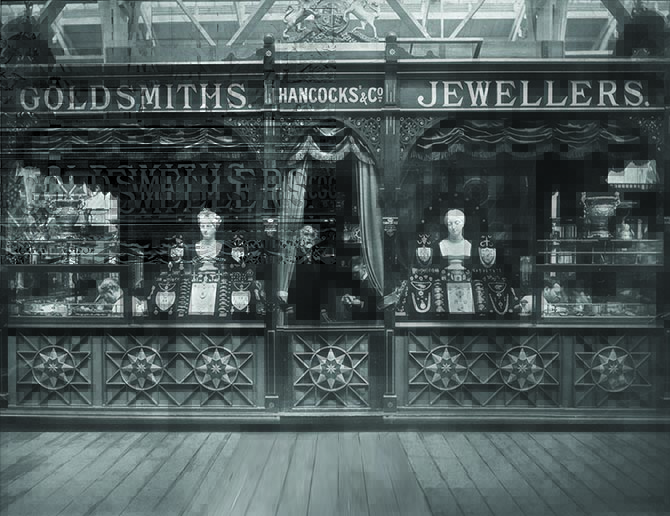 The Hancocks stand at The Vienna Exhibition in 1873 Photo courtesy

Established in 1849, Hancocks set a high bar for excellence from the start. Within the first year of business, the company received a Royal Warrant from Queen Victoria. Then Hancocks went on to gain an impressive array of aristocratic clients as it showed its wares at international art fairs. A few of the stunning items that have passed through the hands of the experts at Hancocks include a ruby and diamond necklace that was once a part of the French Crown Jewels, an emerald suite from the celebrated Seringapatam collection and Princess Margaret’s Cartier diamond rose brooch, a piece she wore to Queen Elizabeth II’s 1953 coronation among many other occasions. 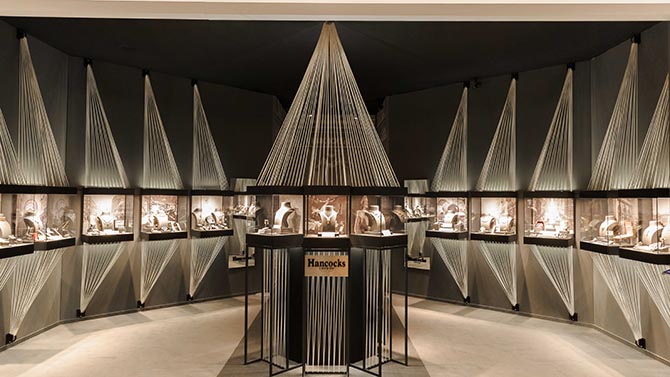 Flash forward to now, Hancocks, which is owned and operated by the Burton family, still shines at prestigious shows with vintage signed jewels, antique diamonds and new bespoke pieces. They are one of the few select jewelers chosen to present alongside impressive exhibitors of art, furniture and decorative arts at Masterpiece in London which opens this week on Wednesday, June 28 and runs until July 5.

“Masterpiece takes place during a great time of year in London with the Wimbledon tournament in session, mostly fine weather and it’s in the perfect location, on the River Thames at the historic Royal Hospital in Chelsea,” explains Hancocks Bespoke Director Guy Burton. “I feel that these factors do have quite an impact to the mood and sentiment of exhibitors and visitors, creating a relaxed atmosphere in fine surroundings.” 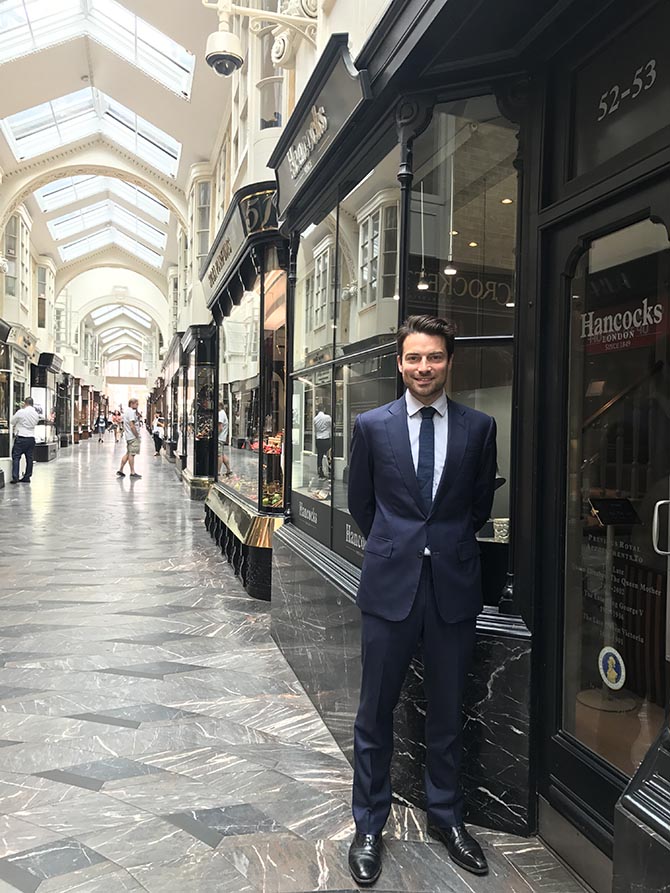 See highlights of the 140 pieces below that what will be on display from Hancocks at Masterpiece. If you are not able to make it to the event this summer visit the Hancocks boutique located in the historic Burlington Arcade any time of year or see selections of the collection online at hancocks-london.com. 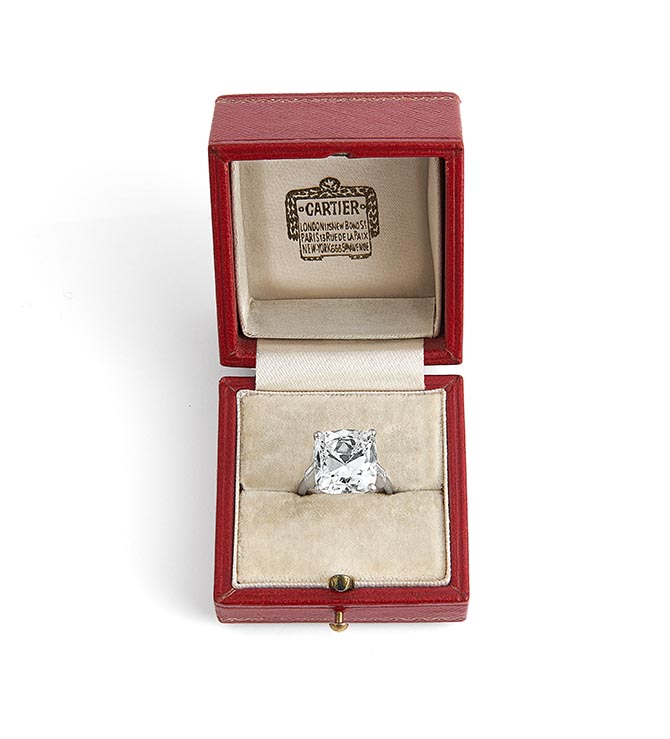 A 12.34-carat cushion cut Art Deco diamond and platinum ring with baguette diamond shoulders made by Cartier around the 1930s from Hancocks. Photo courtesy

Unusual and rare old cut diamonds are a passion of Hancocks’ Guy Burton and several spectacular examples will be at Masterpiece. The 12.34 carat cushion cut diamond set in an Art Deco Cartier ring is one great example. “The level of craftsmanship and skill required to create such a beautiful diamond by hand, together with the facts that the ring is signed Cartier and the diamond is a significant size makes this piece extremely appealing to buyers who want a fabulous diamond, set in a signed jewel from the highly desirable Art Deco period,” explains Guy. “It literally ticks all the boxes!” 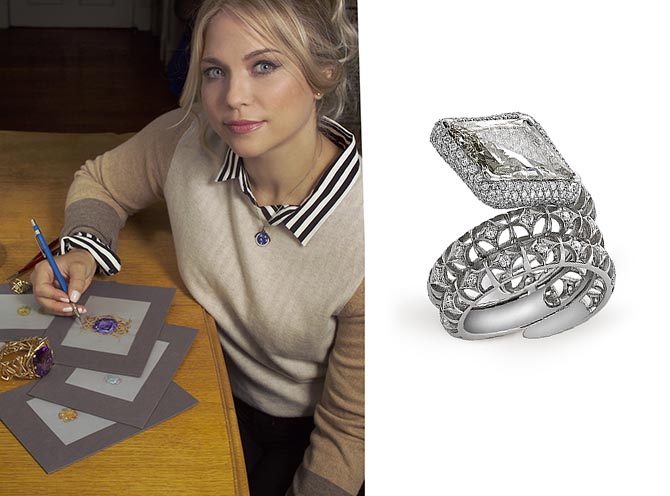 Amy Burton sketching and one of her jewelry designs, the Diamondback Snake Ring Photo courtesy

Amy Burton, who is Guy’s sister and daughter of the owners Stephen and Janie Burton, designs new bespoke jewels. Her impressive creations often feature vintage stones and always a bit of modern edge. It’s a look that blends perfectly with Hancocks inventory, because it is as refined as the vintage jewels. One perfect example of Amy’s imaginative work is her Diamondback Snake Ring. It has openwork platinum scales set with diamond centers. A rare 2.96-carat antique portrait cut diamond covers the pavé-set diamond head. 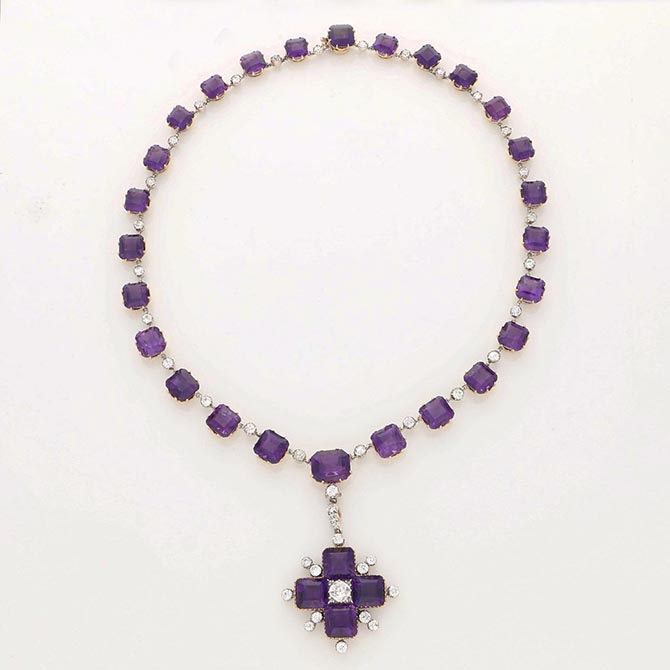 An amethyst, diamond and gold cross pendant necklace made in the Victorian era from Hancocks. Photo courtesy

Being situated in London, it’s no surprise that Hancocks has Victorian jewelry. What’s astonishing is the excellence of the designs. When describing the sensational cross-pendant necklace, which would fit right in with the religious inspired attire at the Metropolitan Museum of Art’s Heavenly Bodies exhibit, Guy explains, “The Victorian age was a time of classical revival, harkening back to ancient civilizations including Biblical references, as well as the gothic period in England and France.” The exquisite amethysts in the jewel reflect Victorians passion for the purple gem that signified deep love. 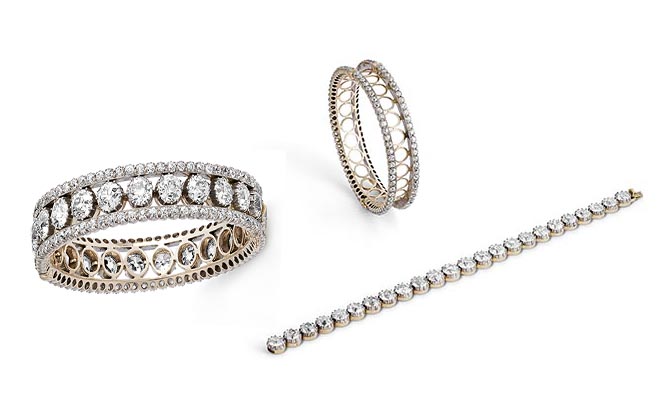 A Victorian old-cut diamond bangle from Hancocks has a line bracelet in the center that can be removed and worn separately. It is shown above assembled and with the line bracelet removed. Photo courtesy

Victorian tiaras are often made so they can transform into a necklace or brooches. Sometimes antique earrings can be altered to wear a couple of ways. What is rare to find is a Victorian bangle bracelet with a diamond line bracelet in the center that can be removed and worn separately. The hinged bangle bracelet in Hancocks collection features a stunning line bracelet set with 24 large Old European brilliant-cut diamonds weighing approximately 29.8 carats. 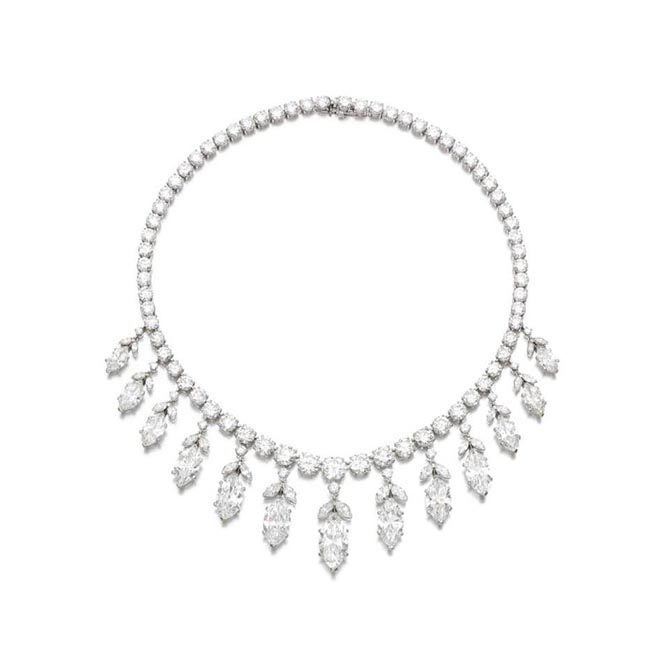 As purveyors of excellent vintage jewelry there is a quality of surprise to what can be found at Hancocks. The astonishing breadth of history covered in the collection extends to treasures made throughout the twentieth century. There are also pieces with impressive provenances.

A Van Cleef & Arpels necklace in Hancocks offering at Masterpiece once belonged to American financier Edward F. Hutton. Famous for founding the firm that bared his name, he also happened to be the uncle of Barbara Hutton and was married to Marjorie Merriweather Post, two of the most celebrated jewelry collectors of modern times. Hutton gave Marjorie gorgeous pieces during the course of their marriage and surely saw several amazing items worn by Barbara.

His connoisseurship comes shining through in the gorgeous Van Cleef & Arpels necklace he purchased. The jewel was made around 1956 and is set with diamonds weighing a total of 67.91-carats. It includes 13 marquise diamond drops weighing a total of 32.22 carats, mainly D color. Seven of the stones are potentially flawless and Type IIa, the most valuable and coveted grade of diamonds on the market today, they originated from the Golconda region in India. 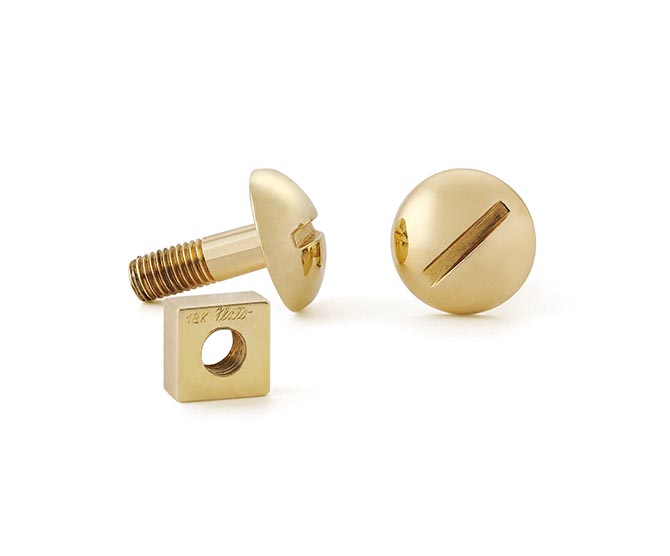 The Nut and Bolt 18K gold cufflinks made by the American jeweler Paul Flato in the 1970s show the whimsical side of Hancocks collection. The iconic pieces were born out of necessity one night in the 1930s when Flato couldn’t find his cufflinks and was running late for a society event. He put a pair of brass nut and bolts on his shirt. “When Flato arrived at the ball, the makeshift utilitarian cufflinks caught the attention of the pianist Eddie Duchin who was rather taken by their quirky nature and requested that Flato make him a pair in yellow gold,” explains Guy. “Flato made them for him and soon after started retailing them in his New York shop where they proved very popular.” When the celebrated French couturiere Elsa Schiaparelli attended the 1938 opening of Flato’s Los Angeles boutique she picked up a pair of the Nut and Bolt cufflinks. The pieces reflected the type of Surrealism she loved to incorporated into her clothing designs.

*This story was created in partnership with our friends at Hancocks

A Brief History of Hands in Jewelry

Why the French Sold the Crown Jewels