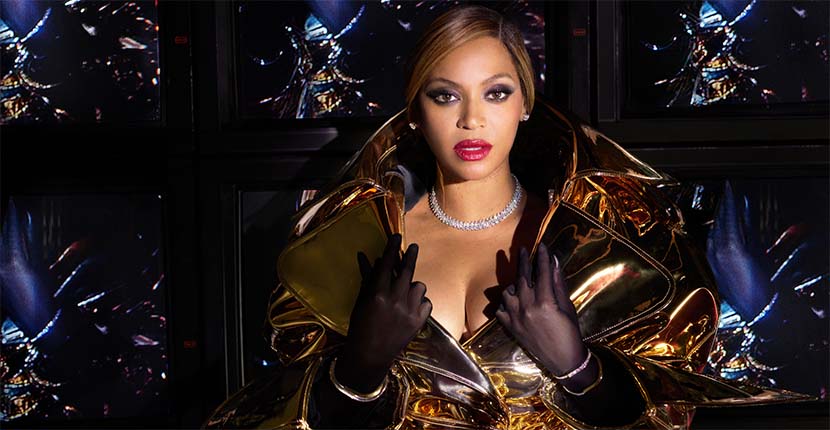 Beyoncé wearing a Duran Lantink trench coat with a Victoria diamond necklace and Lock bracelet with among other jewels in Tiffany’s “Lose Yourself in Love” campaign. Photo Mason Pool/Tiffany

Jay Z isn’t in the ads, but there is a lot more to it

September 6, 2022—Early Friday afternoon, when just about everyone in America had called it a day and taken off to begin enjoying the unofficial end of summer Labor Day weekend, Tiffany released its new ad campaign with Beyoncé. Boom! Kind of like dropping an unexpected album.

Anyway, yours truly (and I don’t think I am alone here) is a little late on the coverage, but taking a beat gave me a chance to think about what was going on.

Unlike the first “About Love” ads with Bey this new campaign called “Lose Yourself in Love” doesn’t feature Jay Z.

But that’s not the greatest point of difference in the styles. In “Lose Yourself” Tiffany seems to have found its modern voice which sounds a lot like Beyoncé. What am I saying?

Audrey Hepburn is such a powerful celebrity spirit hanging over Tiffany every time a big contemporary celebrity—be it Lady Gaga at the Oscars or Beyoncé in the “About Love” campaign—wears an important Tiffany jewel it feels like they are paying tribute to the actress’s style in the opening of Breakfast at Tiffany’s.

You know the scene when Hepburn wears the black Givenchy gown. In the last campaign Beyoncé even made a video singing “Moon River” the signature song from the movie.

The “Lose Yourself in Love” ad campaign is 100% Beyoncé’s style.

To be more specific, it feels like a seamless part of her new Renaissance dance album with a disco vibe. The fact that Bey name checks Tiffany in her song “Heated” and Tiffany dropped a teaser music video-style clip with the ads (below) reinforces the linkup between the superstar and jeweler.

The fashion in these photos, styled by Patti Wilson and Marni Senofonte, has the same mood as the music. Fashion designers in the hot shots by photographer Mason Pool include: Amina Muaddi, Duran Lantink, Graham Cruz, LaQuan Smith, Michael Challita, Sarah Sokol and Vex Latex.

The jewelry in the images all comes from established Tiffany lines including the gold HardWear collection, the T Collection and the diamond Victoria Collection. The Lock bangle, which bowed this summer, is the newest jewelry in the advertisements.

All of it sets a stylish mood for the unofficial beginning of fall.

Beyoncé and Jay Z in ‘Date Night’ From Tiffany

How The Tiffany Engagement Ring Became an Icon