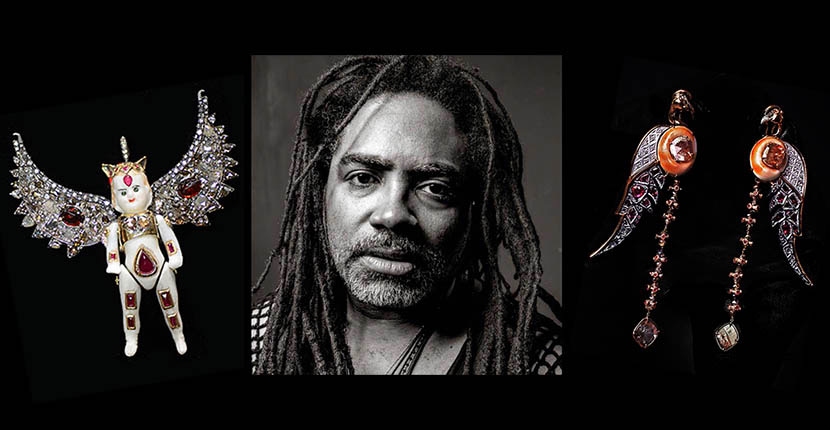 Castro flanked by two of his jewelry designs. Photo portrait by Simon Groneberg and courtesy

The American designer based in Istanbul makes intricate narrative jewels

July 22, 2022 (Update)—We are reupping this story as a celebration of Castro’s life. The designer passed away on Monday, July 18 after experiencing a quick and sudden heart attack.

June 5, 2020—Every single one of the jewels in Castro’s collection has an intricate and often unexpected story of inspiration. In some ways the layers of narrative reflect the designer’s own long journey in jewelry.

Born in Toledo, Ohio in 1972, Castro (who goes by just one name) received his only professional training during an intensive weekend jewelry course he took when he was in his early twenties in order to get a job making repairs in a workshop. The job didn’t pan out but the budding jeweler made the most of his new skills. He transformed his dresser into a jewelry bench and began doing repairs for clients at home. It wasn’t long before he got out of the house and opened a tiny jewelry boutique featuring other designers. “I only had a few pieces, so we displayed them in a way to make the inventory seem exclusive as opposed to sparse,” remembers Castro.

When a client came in and asked if an old ring she owned could be redesigned, Castro had a revelation. “I oversaw and directed some jewelers recreating the ring,” he explains. “When it was finished, I realized I wanted to make jewelry, not just buy it and put it in the store.”

After a few years, Castro was restless for a change of scenery and moved to Chicago to work in fashion retail. “We went to Antwerp where there were open air markets and people showing their arts and crafts,” says Castro. “It sparked the ideas for me to begin doing the same.”

In the beginning Castro’s sidewalk collection consisted of trendy leather pieces and jewels with crystals wrapped in wire. He began to focus his vision and come up with concepts for collections after spending time at the Metropolitan Museum of Art. Routine visits to a museum had been part of Castro’s experience since childhood. “I grew up down the street from the Toledo Museum of Art and my mom took me there a lot,” remembers Castro. “It’s where I first saw jewelry made up of bronze, silver and gold.”

The AngloMania Costume Institute exhibit at the Met that featured Alexander McQueen’s work depicting human skull motifs ignited an idea for Castro. “I was interested in skulls, but I thought animal skulls like the ones found in paintings made during the Black Plague in Europe, would be different” explains the designer. The cool and edgy jewels captivated shoppers on the streets of Soho and buyers from boutiques in Japan and Europe as well as select specialty shops in the United States.

Castro once again reassessed what he was doing and wanted to do with his career in 2014 when the protests and riots broke out in Ferguson, Missouri after the fatal shooting of Michael Brown by a police officer.

“At the time we had the Ferguson issue, I felt like I lost my purpose,” remembers Castro. “I wake up and I go to the Diamond District and I make things. What am I doing? What is my purpose?” After considering starting a jewelry school for disadvantaged black students, Castro realized what he actually needed was a fresh start somewhere outside the United States, away from the racial strife.

“I had heard good things about Istanbul and there were some business prospects here,” remembers Castro. “I originally planned to stay for 90-days, but now I have been her for four years.”

The designer’s imaginative work which is influenced by subjects ranging from Medieval art to the geometric patterns found in Northern African crafts, has flourished in the city that’s filled with talented craftsmen. He produces around 35 one-of-a-kind items a year. Many feature animals.

Monkeys are one of the beautiful creatures that appear repeatedly in Castro’s work. “I like the monkeys, because I like movement of their arms and legs and the sound the jewels make when you move the parts,” explains Castro. “It is a metaphor to remind you to constantly move for circulation. It’s also the youth and movement of your life and relationships. The masks and mini hats on some of the pieces reflect the masks people wear in life.”

Antique porcelain figures dating from around the nineteenth century are another signature element in Castro’s work. “A client brought me the first black and white porcelain figures and I thought they were kind of macabre and creepy in a good way and started using them,” explains Castro.

For a jewel made in collaboration with Muzo Emerald Columbia, he made a porcelain figure as the body of a moth with square emerald antennas “like a tv’s bunny ears.” The wings are composed of emeralds wrapped in silver set with purple garnets. Castro says he decided to make the piece a moth as opposed to a butterfly because “they come out at night and are more alive in a Frankenstein way.”

One of the designer’s most dazzling jewels with a porcelain figure is his Falcon Crest pendant set with an antique bisque porcelain, fancy brown, black and color diamonds, ruby and emerald accents. Castro described thoughts behind the piece as a blend of Benin shields, bronze plates, Egyptian cats and moving wings, like clash of the Titans mechanical owl.

For another magical piece with antique porcelain, Castro gave the figure a hat with cat ears and articulated diamond set wings. He wrote poetically about the jewel when he posted on Instagram in the midst of the protest taking place around the world after George Floyd’s murder by a police officer in Minnesota.

“I have always been fascinated with disco balls in a dark smoke filled nightclub. The way they spin and catch light and reflect it out onto the dance floor and onto the pulsating crowd. Like fireflies in the mist. I try and capture that in some of my pieces. That energy of the dark nights, that disco ball dancing with us as we move our troubles away. Each snap, crackle and pop of the diamonds tapping like a tap dancers scared metal taps scuffing and tapping the floor as if it stole something from the dancer’s mother. Dance! Dance away all the pain and hurt in the world today.”

Get to Know Harwell Godfrey