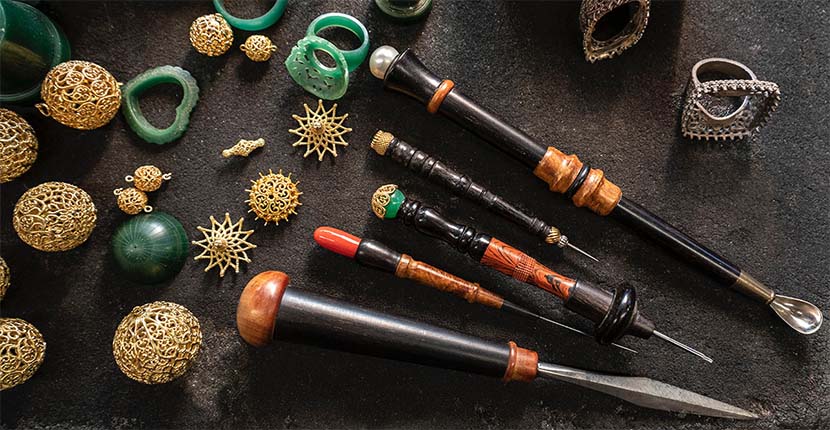 Some of the tools Jim Matthews has made by hand for his work are composed of exotic woods including ebony, rosewood and walnut burl, 18k gold, coral and gems. The image also shows the different stages in the jewelry making process from the wax carving to the casting to finished gold pieces. Photo Sally Davies

How people land in the jewelry world has always been one of my favorite questions to ask people, because the answers are usually filled with twists and turns and a lot of passion. This special multi-part feature about Jim Matthews is one of those stories.

September 21, 2022—Before I tell you the tale of Jim Matthews, the master jeweler from Abilene, Texas, and give you a glimpse into a part of the jewelry world that so often goes unseen and where the stories are rarely told, I want you to understand just how critical the hands of an artisan are to the creation of a piece of fine jewelry.

James de Givenchy, the esteemed designer and founder of Taffin and nephew of legendary couturier Hubert de Givenchy, told me once how important he felt it was to have his own workshop and craftsmen. “To control the finishing of pieces the way that I see them is really putting the signature on the jewel,” he explained. It makes sense, when you recognize how every craftsman is going to do things a little bit or a lot differently.

Well, Jim Matthews was the master craftsmen who first showed James de Givenchy how jewelry was made during the mid-1990s. When James lived in Los Angeles, he persuaded Jim to give him lessons on the bench. “I knew right off that James was worth the time, because he had such a passion for it,” remembers Jim. “I taught him how to make the tools that you can’t buy, the wax carving process and how it goes from setting to finishing, the whole nine.”

Where the story begins…

Born on November 9, 1941 in Abeline, Texas, Jim Matthews was the son of a pawn shop owner and a horticulturalist, in other words creative people. Was his talent nature or nurture? Seems to be a little bit of both.

By the time he was 5-years old he was whittling wood and playing the violin. At 14 Jim was an apprentice gunsmith learning how to decoratively engrave. Throughout high school he played the bassoon and received a full scholarship to Hardin-Simmons University in Abilene.

When Timex opened a local plant, Jim became a mechanical engineer. He worked there for 10-years developing design, overseeing staff and the assembling of watches. When Timex moved out of town Jim didn’t go with them. He wanted to stay in Abeline. It was then that a friend suggested he apply his skills to jewelry repair. At first Jim set up a bench in his garage. The business took off and Jim opened his own jewelry shop named Goldesign in 1981.

It was at this location where he found his soulmate. Or I should say she found him.

The love story part of the story…

Cynthia Bach knew she wanted to be a jewelry designer from the time her father, who was a Lieutenant Colonel in the Air Force, gave her a small treasure chest as a child. “I wanted to fill it,” she remembers.

When her father was stationed back in the United States at the Dyess Air Force Base in Abilene, Texas, Cynthia enrolled at McMurry University to remain close to her family. There wasn’t a jewelry course in the art department but that obstacle did not stop Cynthia. She convinced other students and one of the art instructor’s Bob Howell they needed one.

Once Cynthia felt steady in her skills she found Jim’s store and asked him for an apprenticeship. The two bonded over beautiful craftsmanship and historical designs, fell in love and were married shortly after Cynthia’s 1982 graduation. But the actual proposal was a little more, well, unique than that statement sounds.

At first Cynthia told Jim they should be married. “He was working at the polishing machine,” remembers Cynthia. “I thought he was a great guy and loved jewelry and told him we should get married, because it was the practical thing to do.”

Jim didn’t exactly disagree with the idea of getting hitched, but he did tell Cynthia he wanted to ask her. A few weeks later he proposed with a ¾-carat diamond ring to which Cynthia said “No, we need to show the goods!” Jim circled back with a 1.25-carat diamond and that sealed the deal…for the moment.

Cynthia was right about “showing the goods.” She sold the engagement ring off her finger several times over the years.

A call from New York…

Word of Jim’s rare talent on the jewelry bench spread past the borders of the Lone Star State to New York City. To this day, Jim and Cynthia have no idea how it happened, but happen it did. They received a call from a headhunter who was looking for someone to run a workshop.

Jim honestly had very little interest in leaving the shop he owned and ran, but when the headhunter said they would give him a free trip to New York for the interview, he thought why not? There was also the matter of money. “When I asked, ‘how much does the job pay?’” remembers Jim. “The guy said it pays anything you want.’”

The interview process went on for a long time. Several hours meeting with the headhunter. Jim returned to Texas and had to send some work samples. Then he had to go back to New York again all without ever knowing who the potential employer would be.

Finally, it was revealed the job would be as head of the Van Cleef & Arpels workshop in Los Angeles overseeing 13 employees. Next Jim met with Phillippe Arpels, a descendant of the founder of the firm and they hit it off.

Jim and Cynthia packed their bags and relocated to the City of Angeles. Before they left, they were interviewed by the local newspaper in Abilene. Jim told the journalist I was “just shellshocked—totally amazed. That was the first time I really got interested in it—when I found out who it was and realized that’s the same house that built 75% of the jewelry for the Duchess of Windsor.”

The story of what happened when Jim and Cynthia arrived in Los Angeles will be published next week.