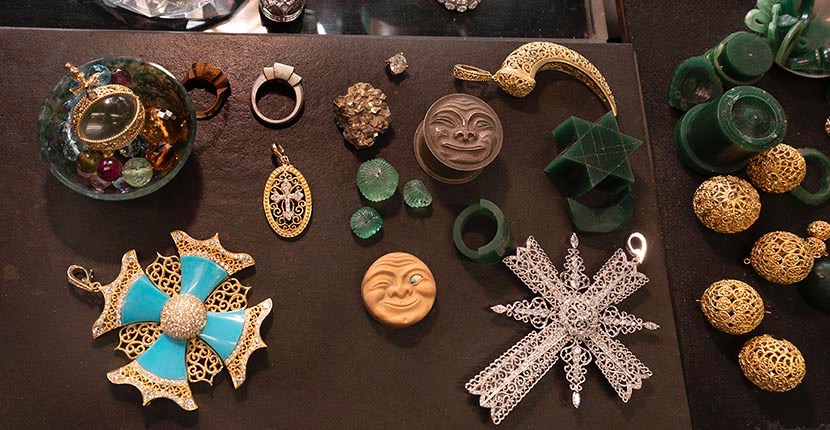 A view of Jim Matthews’s work bench covered with gold jewels he made for the Cynthia Bach Gitane collection and waxes in various stages of production. There is also a wood winking moon face Jim carved inspired by 19th century depictions of the Man in the Moon. Photo Sally Davies

The Unexpected Story of A Master Jeweler: Pt. 2

October 1, 2022— “It was a dream. It was magical” is how Jim Matthews’s wife Cynthia Bach describes what it was like when the couple moved from their home in Abilene, Texas to Los Angeles where Jim became the Director of Fabrication and Design at Van Cleef & Arpels. The timing of their 1989 relocation was perfect.

Shortly after they arrived, jewelry lovers in the city learned about the storied French label at the Los Angeles County Museum of Art (LACMA) exhibition, A Jeweler’s Art: Masterpieces from Van Cleef & Arpels. The landmark presentation was among the first retrospectives for 20th century jewelry design marking the beginning of the modern era in jewelry history.

At the buzzing Van Cleef & Arpels boutique located at 300 North Rodeo Drive, which had a workshop on the second floor, Jim was given a special parking spot where he would pull up in his pickup truck wearing an Armani suit and cowboy boots. “Everyone adored Jim with his Texas drawl and southern charm and he was in his glory,” remembers Cynthia.

Things were different back in 1989 when Jim settled into his new job. It was before the big names in jewelry became mega brands with boutiques throughout America and the world. Van Cleef only had three locations: Paris, New York and Beverly Hills. Each one made original designs using the Van Cleef & Arpels code of motifs. When a design received final approval from the powers that be in New York or Paris, Jim oversaw the jewelers who made it in the workshop.

During the era, jewelers with lofty names in Los Angeles including Van Cleef & Arpels truly functioned as elevated local jewelers who not only made custom pieces, they also did repairs and alterations. Jim would come down from the workshop to review these jobs for VIP clients, including movie stars, royalty, socialites such as Betsy Bloomingdale and former First Lady Nancy Reagan.

Van Cleef clients also included rock legends. Before Bruce Springsteen married Patti Scialfa in 1991, he commissioned a platinum wedding band from Van Cleef & Arpels. “Jim made the ring by hand out of a solid block of platinum,” explains Cynthia. “It wasn’t cast or anything like that.”

A new chapter begins with the launch of Cynthia Bach…

After three glorious years at Van Cleef & Arpels, the company decided to restructure. They shut down the workshop in Beverly Hills and let everyone go.

Cynthia took this turn of events as her call to action. Her plans to be a jewelry designer—which she had been working towards studying at the Gemological Institute of America (GIA) and “researching the hell out of heraldry in the library”—kicked into high gear.

“Jim lost his job on a Monday and I flew to Neiman Marcus headquarters in Dallas on Thursday,” remembers Cynthia. “When I got there I cold called Steve Magner, the executive vice president of the jewelry department, and asked if I could see him right away. I told him I wanted to show him my crowns. He asked, ‘For your head?’” Once Cynthia explained they were rings he invited her to come to his office.

In the early 1990s, there wasn’t much designer jewelry in Neiman Marcus or any department stores. Their collections were limited to Henry Dunay and Jean Mahie and what’s called private label which are basic items like tennis bracelets or gold bangles picked up from manufacturers.

So, the idea Cynthia was presenting to Steve Magner was pretty novel, but he was impressed with the crown rings. “He said I will give you $6,000 to get underway on more work and Cynthia said ‘I’ll take it,’” remembers Cynthia.

The Cynthia Bach collection took off rapidly and went into several Neiman Marcus stores. Cynthia built up a clientele who was passionate about the romantic designs inspired by historic styles and loaded with details Jim added on the work bench.

Hollywood embraced the collection too. A film montage of Cynthia Bach jewels would include countless clips from the red carpet. Selma Hayek put on a diamond and platinum crown at the White House Correspondents dinner; the piece later went on tour with the 1997 The Nature of Diamonds exhibition curated by the American Museum of Natural History. Halle Berry won the Best Actress Golden Globe in a custom-made black diamond and platinum choker, earrings and bracelet all by Cynthia Bach.

At the 2017 Oscars, LaTanya Richards Jackson, actor Samuel Jackson’s wife, wore a 20.23-carat emerald and platinum ring by Cynthia Bach. Samuel Jackson is also a fan. The Kong star posted a picture on Instagram in 2015 in his crown ring with the caption, “I don’t wear jewelry that often, but I Love my Platinum & Diamond Crown ring by @cynthiabach.”

There have been countless collections Cynthia and Jim created together in a process that goes on to this day. The Crowns became a signature motif rendered in intricate rings and brooches. Lyrical Peacock Feathers were transformed into rings that climbed up the finger, wide bracelets and pendant earrings. Then there was the Gitane collection which is a hat tip to the gold work that Jim specializes in.

Once Cynthia completes her designs, Jim carves a wax and covers it in detail. Engraving, filigree and milligrain are just a few of the master techniques Jim implements.  “If there is a smooth place I am going to make it textured somehow,” Jim explains. “We don’t have smooth surfaces,” Cynthia adds. “We don’t have straight lines.”

“It’s one brain it’s one mind,” is how Cynthia describes the work she and Jim do together. “I’ll have an idea or he’ll have an idea. I give him a sketch then he works into it.”

Remember when I told you at the beginning of this long tale how Taffin designer James de Givenchy, who initially learned about bench techniques from Jim Matthews, felt having a craftsman who understood your signature was critical to the finishing of a jewel? Jim and Cynthia’s life of collaboration is a very special expression of the importance of a craftsman to a signature style. There are few, if any, like it in the history of jewelry.

As you might imagine a creative person like Jim is not limited to one medium. During the course of the pandemic, the colors of gems in jewelry followed him into wood carving and the fanciful installation worthy of an art gallery that fills the couple’s entire garage. It is one of several imaginative ways he has used his skills outside the jewelry realm.

I hope with this unexpected story of Jim Matthews, the master craftsman, you are left with some of the behind-the-scenes magic that happens in jewelry because of the people who create it.

The Unexpected Story of a Master Jeweler: Pt. 1