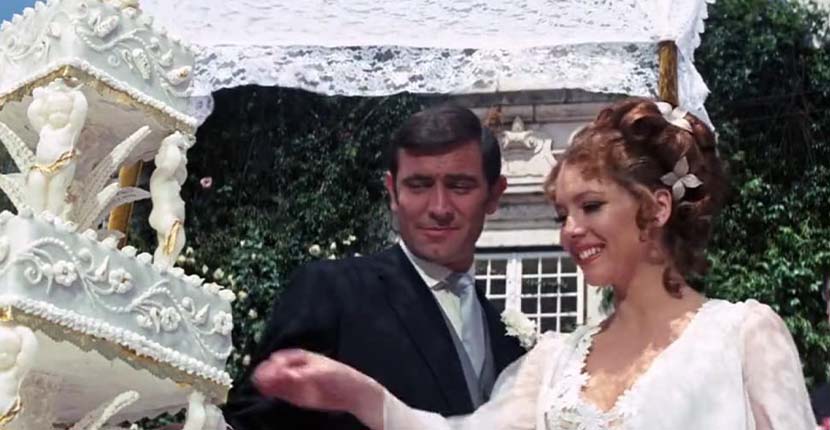 In 'On Her Majesty’s Secret Service,' James Bond (George Lazenby) cuts the cake with the Countess (Diana Rigg) who wears the 'All the Time in the World' wedding band. Photo via

January 27, 2022—James Bond got married once. The union happened in the 1969 film On Her Majesty’s Secret Service starring George Lazenby as 007 and Diana Rigg as Contessa Teresa di Vicenzo who was more casually known as Teresa “Tracy” Draco.

Charles de Temple designed the 18K bi-color gold openwork ring used to unite the cool couple. The message worked into the composition of the jewel says, ‘All the Time in the World.’ A textured white gold background makes the bulbous yellow letters pop off the surface. Some of the smaller words are horizontal. Overall, the look of the piece feels as though it has been melted somewhat through an intense action scene.

The phrase ‘All the Time in the World’ recurs throughout the movie and is the title of the theme song performed by the great Louis Armstrong. At the end of the film—spoiler alert—Bond’s bride is killed by assassins and he reads the words on the ring as he cradles her in his arms.

The man behind the design, Charles de Temple, was born in Mexico and learned his craft in Massachusetts. When he relocated to Swinging London his textured gold and gem-set work captured the spirit of the era. He quickly became one of the coveted names among the fashionable set of jewelry designers including Andrew Grima, George Weil and John Donald.

De Temple’s imaginative approach made him just the right designer for Bond. At the 1964 premiere of Goldfinger, the actress Honor Blackman, who portrayed Pussy Galore, wore a de Temple 22K gold piece accented with a diamond that covered her pinky finger.

After the premiere of On Her Majesty’s Secret Service and the debut of the ‘All the Time in the World’ ring, de Temple created a limited-edition series of 50 designs that were slightly different than the two originals used in the movie.

Watch the trailer for On Her Majesty’s Secret Service below. While it doesn’t show the wedding ring, it does give you a sense of the film’s style and a snippet of the Louis Armstrong theme song.

Jewelry Is Part of the Action in ‘No Time To Die’

The Best Jewelry at the ‘No Time To Die’ Premiere