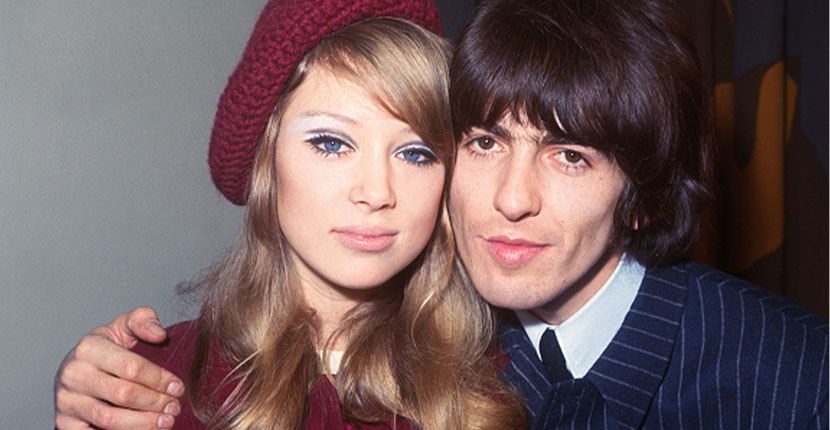 Pattie Boyd and George Harrison pose for the press shortly after their 1966 wedding. Photo Getty

January 5, 2022—Like so many Beatlemaniacs, I watched all three parts of the nearly eight-hour Beatle documentary Get Back on Disney+ when it was released over the course of Thanksgiving weekend. Ever since I have been deep down in the rabbit hole of Beatles music and become obsessed with their late 1960s style. Clearly, I am not alone in this endeavor.

New York Magazine’s culture section, Vulture, did a story ranking the “fits” in Get Back. And The New York Times Style section published a lengthy piece on the scene stealing outfits sound man Glyn Johns wore during the sessions. Both are delightful stories but there is no jewelry in either one. The fact is there is very little in the documentaries.

The only jewels I spotted were men’s wedding bands. Ringo’s left-hand shines with a thick gold wedding band. Clearly the drummer, born Richard Starkey, had paired down from the days when all the rings he once wore inspired his nickname Ringo Star. The aforementioned Glyn Johns sported an artistic woven wire gold wedding band.

Still, I knew there had to be some good jewelry story in Beatles-land beyond a mention in their lyrics or that time in 1963 when John Lennon teased an audience, including members of the royal family, to “rattle your jewelry” along with the beat for Twist and Shout.

George met Pattie, who was a model, during the 1964 filming of Hard Days Night in which she had a small role. The young couple were engaged on Christmas Day in 1965 and married on January 21, 1966. Pattie was 21 and George was 22.

Pattie wrote about the jewel she received from George in her biography Wonderful Tonight.

He didn’t give me an engagement ring, but we did go to Garrard, the royal jewelers in Regent Street, to choose my wedding ring. There was a lot of fuss when we arrived: all the assistants were excited and the top man was called out from the back to serve us. The ring I chose was a wide gold band that looked like a little brick wall made from yellow, pink and white gold. It was unusual, flexible, and felt lovely on my finger. I didn’t buy George a ring. He didn’t want to wear one—few men did in those days.

Since the couple was married during the height of Beatlemania, they tried to avoid a frenzy of fans and the press on their wedding day by tying the knot during the early morning at the registry office in Surrey, just outside London where they lived.

Pattie didn’t wear a traditional wedding gown. Instead, she chose a Mary Quant deep red silk dress and red fox fur from the designer that was a gift from George. The Beatle wore a suit as well as a Mary Quant Mongolian lamb coat. It is the one he sports throughout Get Back including in the famous concert on the roof of Apple studios.

Despite the fact that the couple did their best to be low-key, the fans and press turned up in droves. After the ceremony George and Pattie politely sat down for interviews. See the footage of their meeting with the press, including a moment when they show off the Garrard ring below.

The couple’s union became part of music history in 1969 when Harrison wrote Something about Pattie. In the video for the song all the Beatles wives and partners were featured. You can’t see Pattie’s wedding band in the footage, but you can see Ringo Star’s chunky gold wedding band.

In 1974, Pattie famously left Harrison for his friend Eric Clapton who had pursued her relentlessly. His hit Layla was written about her. Somehow George and Eric managed to maintain their friendship. The Beatles rabbit hole is an epic warren of content.