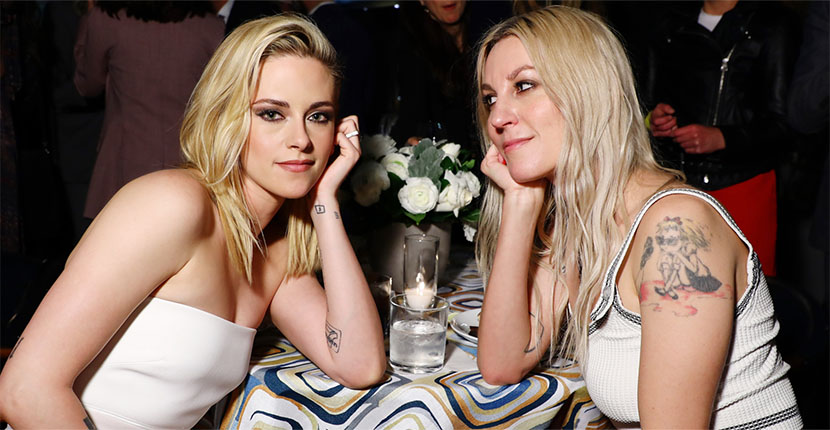 Kristen Stewart, who is wearing her engagement ring, poses with her fiancée Dylan Meyer at The Hollywood Reporter Nominees Night on March 7 in Beverly Hills. Photo Getty

But who made it? And what is it made of?

March 11, 2022—Kristen Stewart has been on the Awards show circuit this week. Nominated for a Best Actress Oscar for her role as Princess Diana in Spencer, she attended the Oscar Nominees luncheon and The Hollywood Reporter’s Nominees Night not to mention the Independent Spirit Awards and Santa Barbara International Film Festival where she was honored.

Looking at pictures of all of it for her jewelry, I couldn’t help but notice the thick angular band composed of a white metal on the third finger of her left hand.

I knew Stewart announced on Howard Stern’s show in November she was going to marry her girlfriend Dylan Meyer. To be exact she said, “We’re marrying, we’re totally gonna do it.”

But the facts of the ring passed me by.

To be fair, it initially passed others by as well. As early as October, when Stewart began promoting Spencer, she was wearing the ring. No one noticed.

She was even showing it off in a very Kristen Stewart kind of low-key way by putting her hand in her hair. It was totally overlooked which is what happens when you choose something less than flashy.

The same thing happened to Zoë Kravitz. Her delicate vintage diamond engagement ring, from former husband Karl Glusman, went unnoticed even though she was wearing it openly on the red carpet. Months later, she confirmed she was engaged during an interview when the reporter spotted the jewel. A slew of stories followed.

After Stewart mentioned it on Stern’s show the response was the same. The press went looking for the ring.

When they saw the thick white metal band, they tried to make sense of the design. It was anything but a traditional solitaire diamond ring.

It clearly wasn’t from Chanel which is actually kind of surprising because Stewart is an ambassador for the brand and wears their clothes almost exclusively on the red carpet along with their jewels and watches. Of course, that doesn’t mean she would choose it for her engagement ring, but she seems to authentically love the label. She expressed her gratitude repeatedly for all the help they provided to the costume department on Spencer.

Some members of the press thought the ring looked like silver but could be platinum. They tracked down my friend Jenny Luker, president of Platinum Guild International USA. She explained to Hello magazine:

Kristen’s ring appears to be a wide, brushed platinum band with a flat front and square-shaped edges, giving a modern twist on a classic style. Because this ring is set in platinum, it won’t lose metal over time, so it’s perfect for her to wear every day. I would estimate this ring costs approximately $2,500.

Note Jenny’s word “appears to be…platinum.” When I reached out to her to find out if she wanted to elaborate on the statement, Jenny said “it should be platinum” for exactly the reasons listed above. Platinum is a far more durable metal than silver and will remain in excellent condition over time with everyday wear.

Who designed the jewel? No one seems to have any idea. The only other jeweler I really notice Stewart wearing regularly besides Chanel comes from her makeup artist Jillian Dempsey. She wears her Lip Locket necklace in silver routinely.

Did Jillian whip up the ring as a special commission for Stewart? If we get any more information this post will be updated.

Diana’s Pearls Are A Major Part of ‘Spencer’