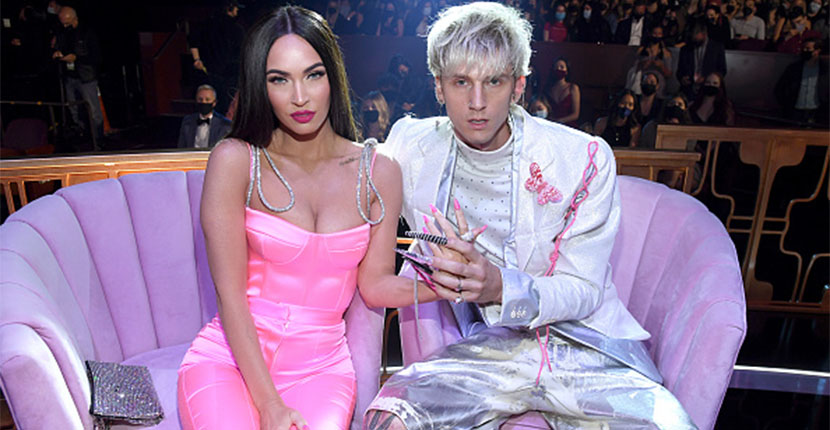 January 12, 2022—It’s not exactly a surprise Megan Fox and Machine Gun Kelly (aka Colson Baker) are making it official. The twosome has been showing their love for each other with demonstrative PDAs on every red carpet from here to Hollywood. What’s breathtaking about this engagement is THE RING!

For the last several months, Baker has been working with British jewelry designer Stephen Webster on the two-stone jewel. The musician described it on his Instagram post:

“I know tradition is one ring, but I designed it with Stephen Webster to be two: the emerald (her birthstone) and the diamond (my birthstone) set on two magnetic bands of thorns that draw together as two halves of the same soul forming the obscure heart that is our love.”

Stephen Webster explained the magnets holding the two rings together were buried in the gold.

Colson sought out Stephen Webster after he saw one of the designer’s collections from around 12 years ago dubbed The Seven Deadly Sins. “He wanted something completely unique and 100% connected to Megan and himself,” explained Stephen.

“After further consultations, I produced several designs, each influenced by the personal information and details Colson shared with me. The final ring is a one-of-a-kind piece consisting of a combination of diamonds and emerald.”

Both the pear-shape emerald and diamond are sensational stones. The images of the emerald show just how clear and rare a gem it is. In fact, finding the gem added months onto the production process. Stephen scoured the world for just the right emerald.

This jewel isn’t the first engagement ring Stephen Webster has made for a high-profile bride. He created Pink’s striking engagement ring that says “’Til Death” in Gothic script studded with diamonds. He was also responsible for the massive diamond engagement ring Christina Aguilera received from Jordan Bratman in 2005.

Meghan and Colson, who met in 2020 while filming the movie Midnight in The Switchgrass, have been garnering attention as a couple not only for their PDA on the red carpet but also their outrageous rocker ensembles. This ring will clearly add even more excitement to their appearances.

See the video of Megan wearing the ring below.