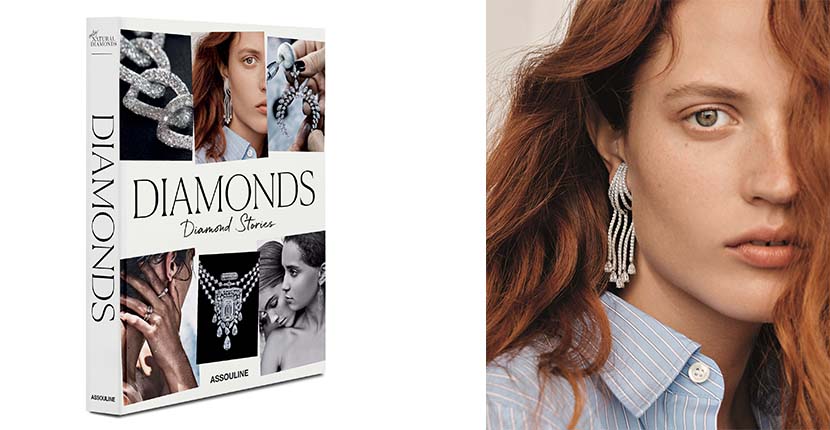 Diamonds: Diamonds Stories published by Assouline in collaboration with Only Natural Diamonds and inset of a model wearing an Ana Khouri diamond ear piece Photo Assouline and Ana Khouri

October 22, 2021— There have been countless books written about diamonds over the years. Diamond Jewelry: 700 Years of Glory and Glamour is one recent standout from 2019. The Queen’s Diamonds is a stellar 2012 publication on Elizabeth II’s collection. I even wrote a book on the subject, Diamonds: A Century of Spectacular Jewels many years ago.

So why would you need a new book on diamonds?

Well, the 260-page Assouline publication, Diamonds: Diamond Stories, produced by Only Natural Diamonds reveals what diamonds mean to designers, editors and stylists among others today. As in right now, in the midst of all the baggage the gem has acquired not to mention the clichéd ideas that have built up around diamonds. The 9.75 x 13 inch book, which weighs in at 5.7 pounds, clears the decks in a way by underscoring the fact that there is still nothing like a natural diamond.

Edward Enninful sets the tone in the Foreword with an unexpectedly self-deprecating story. The esteemed editor-in-chief of British Vogue explains how he learned about diamonds during the 1990s when he was working on shoots with photographer Steven Meisel for Italian Vogue.

As the minimalist I was, I turned up to our first shoot with shirts and pants; did look one, did look two, until finally, Steven went, “I’m bored. What else can you do?” And so, for our next shoot, I turned out the glamour: the furs, the hats and, of course, the diamonds. Versatile by nature, I found their powers instantly transformable. Steven and I would discuss diamonds for eternities. From Fred Leighton to Tony Duquette and the newest and youngest jewelry designer on the fashion scene, our collaborations were forever fueled by the diamond’s exceptional and chameleonic ability to shape the diamond knows no ownership or boundaries. Its sparkle is universally attractive: alluring, elevating and uplifting.

The Introduction of Diamond Stories by British Vogue’s fashion critic Anders Christian Madsen explains how the book is mainly about the new guard. Photographs and very short anecdotes from the mavericks, innovators and iconoclasts of today are sprinkled throughout the pages.

The great Greek designer Nikos Koulis talks about the moment when he visited De Beers’s office in Botswana and saw all the rough diamonds. “It was like I was a student again, and this was my first contact with the material,” he said. “Sometimes we as designers can forget the connection between nature and the final piece, but this trip reminded me why there’s so much desire around diamonds.”

The African-born London based designer Vania Leles of Vanleles explains that one of the motivating factors for her to launch her own jewelry label was to make sure the diamonds in her creations came from Africa.

“I saw so many gemstones and diamonds coming from Africa and no one was mentioning the stones’ origins, I wanted to change that and honor the places where the gemstones came from,” says Leles. “Honoring the provenance, only then we will be obliged to source ethically and with sustainability at the forefront of minds.”

The book also includes quotes from all different types of influencers on their love of jewelry in general which makes sense because diamonds are such a foundation of jewelry. One of my favorite lines comes from one of the co-founders of GemX, Lin Jamison.

She said, “Jewelry, in my view, is the perfect vehicle for storytelling. It is given meaning by the people that have interacted with it: the designer, the makers, the setters and ultimately the wearers.”

There are several short anecdotes in Diamond Stories about historic stones, such as the Hope and Tiffany Diamonds. The history of the gem, after all, is clearly still part of the stone’s allure.

Mainly the book, which boasts over 200-illustrations, is about striking visuals. It shows time and again, as Enninful described, how diamonds instantly transform a look into an eye-catching image.

Jewelry Is Part of the Action in ‘No Time to Die’