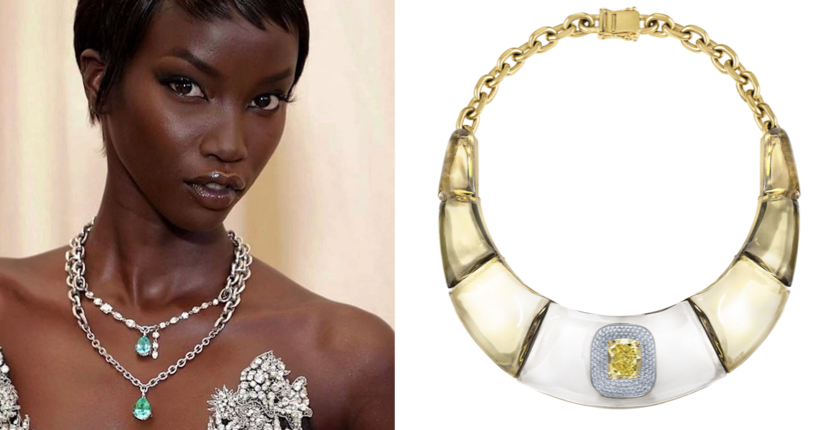 October 13, 2021—In all my many years covering jewelry on the red carpet, I have never seen a showing quite like Ana Khouri at the Met Gala last month. She bejeweled nine celebrity guests. Several were wearing pieces from her new High Jewelry collection.

For a big brand that would have been an incredible turn out. But Ana Khouri is not a large corporation. It’s an independent label run by a visionary designer who specializes in bold minimalist jewelry for mavericks. The innovative styles are always set with spectacular stones and made by master craftsman.

So how did the collection land at the Met Gala?

Ana did a pandemic pivot from her normal routine. Since 2014 she has presented her new High Jewelry collections, like so many supreme designers, in Paris during the July Couture fashion events. Her work, which she shows at the Musée des Arts Décoratifs, fits in flawlessly with the schedule of events.

Ana changed course this year because it was unclear months in advance of the July Couture week if it was going to happen at all. “I knew I would be attending the Met Gala in September and I decided that’s where I would show the new jewelry collection on guests and then roll out the details of the designs afterwards.”

Needless to say, I was eager to get those details.

Several pieces in the collection include gems from Ana’s native Brazil. “I spent six months in Brazil during the pandemic,” explains the designer who lives and works in New York City. “It inspired me to bring some of the nation’s gems into my jewelry as a kind of tribute.”

Of all the many beautiful stones that can be found in Brazil perhaps none are more closely identified with the nation than paraíba tourmaline. The neon blue and green gems were originally discovered and named after Brazil’s State of Paraíba in the Northeast.

Ana set a blue and a green paraíba tourmaline on a chunky white gold chain necklace with asymmetrical diamond details. It was worn at the Met Gala by model Anok Yai.

The bold bib necklaces worn by Maria Sharapova and Ana Khouri at the Met had specially cut stones from Brazil including citrine, rock crystal, amethyst and pink quartz.

Having the large gems cut for the necklaces was one of Ana’s biggest challenges.

“You lose some of the color when you cut a large stone down,” explains Ana. “So there was a bit of trial and era to get the right color and shape.”

At the center of both of the jewels are special white pavé-set diamond sections in an indented bowl shape that hold one fancy colored diamond.

A 20.65-carat natural Vivid yellow diamond is set among the citrines on the yellow gold necklace worn by Maria Sharapova.

Rubies were another standout stone in Ana’s new collection.

As you can see in the picture above, they wrapped around her ears as oppose to hanging from her lobes.

The detail image reveals the full construction of Ana’s ear pieces and how the gold bar on the top section provides a comfort fit.

Soccer star Megan Rapinoe featured above wore Ana’s Carolina diamond ear pieces. They were like fireworks on top of her star-spangled Sergio Hudson suit which fit into the theme of the Met exhibition of In America: A Lexicon of Fashion. The fireworks in my mind are also a celebration of Ana’s triumph of the Met red carpet.

The Radical Chic of Ana Khouri

The Best Jewelry at the ‘No Time To Die’ Premiere

Who Made Kate Hudson’s Engagement Ring