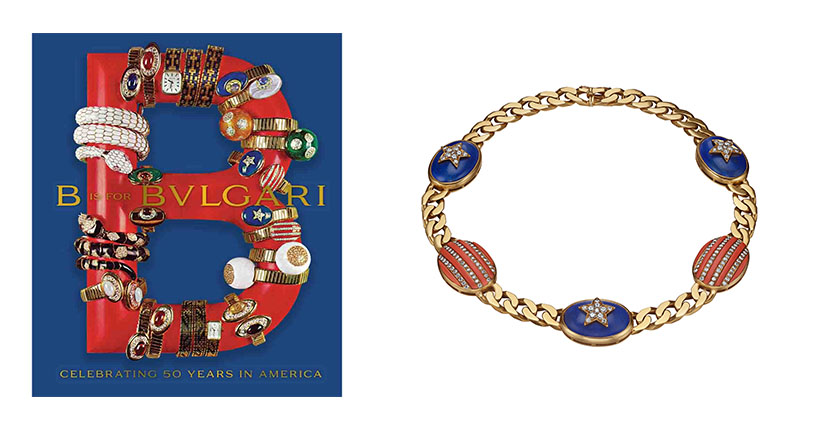 B is for Bvlgari book cover and a Bulgari Star Spangled Banner necklace made during the 1970s and composed of diamonds, lapis, coral and gold. Photo The Adventurine Limited Editions and Bulgari

December 16, 2022—The story of what happened when the three Bulgari brothers—Gianni, Nicola and Paolo—decided to open a boutique in New York City in the early 1970s has fascinated me for decades. It was Bulgari’s first location outside of Italy and it caused a sensation.

When they arrived in America, the Bulgari brothers succinctly articulated their point of view to journalists. “It was about making design the topic,” Gianni Bulgari explained. Another time he enlightened the press who seemed to believe all fine jewelry was serious. He said, “People are looking for amusement.”

When asked about the incredible gems and ancient coins in the jewels, Nicola Bulgari told The New York Times, “We are always looking for the impossible.”

B is for Bvlgari: Celebrating 50 Years in America, which I co-authored with Lynn Yaeger, reviews some of the many highlights over the years since Bulgari opened its first boutique in New York City. A 1970s advertisement featuring a large bejeweled B inspired the alphabet format and title.

The strong design of the publication created by Russell Hassell, all-out glamour of the jewels, touch of humor and editorial images from legendary photographers Richard Avedon, Gian Paolo Barbieri and Francesco Scavullo among others are our tribute to the Italian jeweler’s inimitable style.

B is for Bvlgari is the premiere publication from The Adventurine Limited Editions.

Italians Made The Best Patriotic Jewels