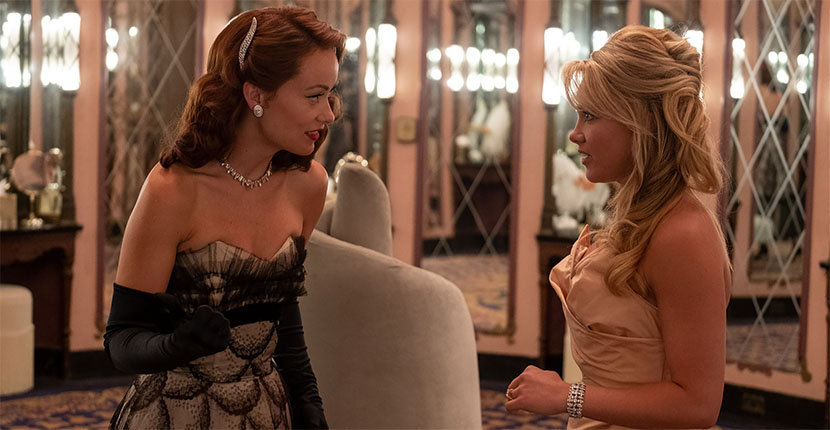 September 23, 2022—Don’t Worry Darling has received mountains of press for all the wrong reasons in advance of today’s official opening in theatres. There was the disputed departure of Shia LaBeouf, the love affair between director Olivia Wilde and her leading man, pop star Harry Styles, and the on-going feud between the director and her leading lady Florence Pugh.

Beyond the behind-the-scenes gossip, there is the matter of the film itself. Reviews of the sexy psychological feminist thriller have been mixed. The one thing everyone agrees on is the beauty of the production design and the work of costume designer Arianne Phillips.

She outfitted the cast in divine mid-century style ensembles that reflect the mid-century architecture of the desert town where the film is set (which is in fact Palm Springs) not to mention the timeframe of the script.

For a key scene when all the main characters are formally dressed, Phillips sourced mid-century jewelry from the Bulgari Heritage Collection.

Jewels that once belonged to actresses Audrey Hepburn and Ellen Barkin are among the treasures onscreen. Read on for all the details.

The actress Sydney Chandler who bears a striking resemblance to Audrey Hepburn wears the screen legend’s diamond, platinum and gold designs in the film.

Audrey Hepburn acquired several Bulgari jewels when she lived in Rome during her marriage to Andrea Dotti.

She was famously photographed once with her son darting in the boutique on the via Condotti.

Gemma Chan’s Bulgari statement necklace is a convertible piece that can also be worn as bracelet. Owned by Ellen Barkin, the bracelet (seen below) is one of a pair.

Barkin sold both at Christie’s, along with all her other exceptional jewels, after her bitter divorce from Ron Perelman who gifted her the pieces in the collection.

The 2008 Sex and The City movie included a scene inspired by the auction. Samantha (Kim Cattrall) invites all the girls to join her at Christie’s when she bids on a flower ring from the sale of a divorcée who was thrown out of her townhouse by her ex-husband, a scenario that echoed Barkin’s experience.

Featured in several Bulgari museum exhibitions, the Ellen Barkin bracelet worn by Gemma Chan was made in 1955.

It is composed of pavé-set diamond bombé segments with a collet-set round diamond divided by baguette-cut diamond elements.

In the image with Gemma Chan, you can see the ruby, diamond and platinum Bulgari earrings made around 1955 on Florence Pugh.

The jewels are apparently convertible and can also be worn as brooches.

Florence Pugh also wears a dazzling diamond bracelet from the Bulgari Heritage collection befitting her starring role in the movie.

The jewel is beautifully laid out like a puzzle with various fancy shape diamonds. There are emerald cuts running down the center flanked by tapered baguettes in a fan. Between those two motifs are four rounded marquise shape diamonds.

A Look Back At Ellen Barkin’s Jewelry