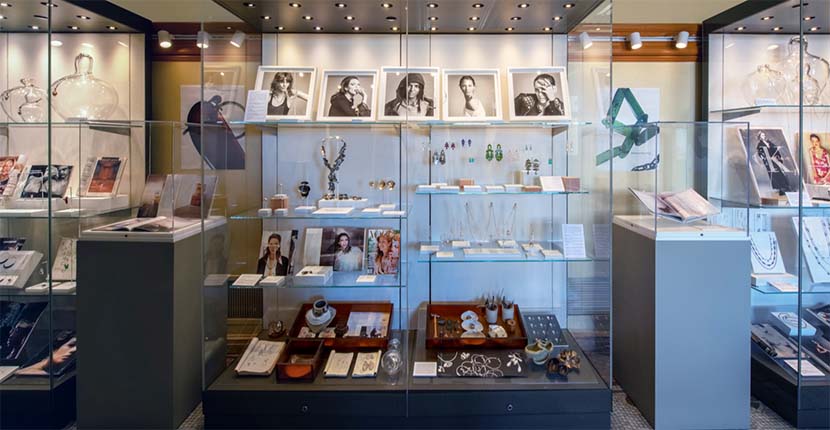 Detail of the Thirty Years of Ten Thousand Things exhibit at the Pratt Library in Brooklyn. Photo Andrew Werner

December 7, 2022—During an easy-breezy lunch in early September, David Rees who makes up half of Ten Thousand Things along with Ron Anderson, asked me if I would host a conversation at Pratt about their 30th anniversary exhibition taking place during New York City Jewelry Week. I have known the design duo for about 30 years and said, “Of course, I would love to.” Next thing I knew the situation evolved into an all-absorbing-mini-mega project.

By October-November, David was introducing me as the curator of the exhibition, Thirty Years of Ten Thousand Things. We had an exhibition designer. Two mount makers were part of the crew: one from the Met Museum and one from Pratt. Two other experts were fully absorbed carefully setting the ephemera so it could be viewed without being damaged. And jewelry designer Sara Beltrán, who is friends with David and Ron, stepped in to stage the still life of objects from the Ten Thousand Things Archive during the installation process.

I have always appreciated the effort that goes into making minimalist jewelry perfect in terms of design, materials and craftsmanship. During the course of this project, I saw first-hand how Ron and David take those operating procedures into every aspect of what they do.

One of the grand realizations I had while studying the work was how much it deserved the deep dive. At a time when large costume jewelry dominated the accessories scene, fine jewelry was nowhere to be found on the pages of fashion magazines and there were very few independent designers, Ten Thousand Things burst on the scene with a personal, soulful collection. It is not an exaggeration to say, Ten Thousand Things helped changed the course of jewelry.

If the old adage applies that history can’t really be studied until at least 20 years has passed, the time to be looking at Ten Thousand Things iconoclastic creations from the 1990s is, in fact, overdue. It is surely one of the reasons the exhibit has been so enthusiastically received.

The evening Thirty Years of Ten Thousand Things opened there was a spillover crowd for the conversation. By popular demand, the dates of the exhibition were extended to December 16. If you are in the New York City area and have a chance to head to the Pratt Library, go see it.

Following are highlights from Thirty Years of Ten Thousand Things.

In the glory days of print media during the mid-90s and early aughts, the range of Ten Thousand Things credits ran the gamut from the covers of Vogue, Allure and Mademoiselle to TV Guide. (Yes, TV Guide!)

They appeared in the tabloids on celebrities such as Jennifer Lopez and Reese Witherspoon. And the credits have never stopped rolling in proving how their work has always been in sync with the personal types of treasures stylish women want to wear on a day-to-day basis.

Inspired by the Ancients

While Ten Thousand Things looked great on the waifs and supermodels and meshed with minimalist styles of the mid-1990s moment, there was more to it than you might notice at first glance.

Gold beads threading the gems in their signature Beaded necklaces were inspired by granulation Ron and David spotted in ancient Roman jewelry at the Metropolitan Museum of Art.

It’s a recurring theme with the design duo’s desire to present gems in a unique way as opposed to traditional bezel or prong settings.

An interest in forms, metal techniques, movement and articulation, led Ron and David to the Sculptural collection around 2000.

The designs started as small-scale gold jewels and evolved into large silver pieces. Georgia O’Keefe’s orchid paintings were one of the artistic references the designers had on their minds when they made the Sculptural jewels.

Ron and David have been fascinated by the luster and shapes of pearls since they launched Ten Thousand Things.

Over the years they have made any number of designs with various types of pearls including South Sea, Keshi, Tahitian and Baroque. One of their favorite types of pearls is American natural pearls from the Mississippi River.

The Shape of Gems

In 1995, Ten Thousand things launched the Chiclet. It was the first hand cut gem they designed. Suspended from their signature drawn cable chain with a handmade fish hook clasp, the design came in a variety of gems.

Wildly popular, the Chiclet has been featured in several films including Kate Hudson in How to Lose a Guy in Ten Days (2003) and Julianne Moore in Still Alice (2014).

In October 2017, during a trip to Jaipur, Ron and David met with lapidaries and saw the potential to create new Hand Cut work on a large scale. Every year since, they have returned to India with models of shapes and rough gems for the lapidaries. The special flat gems create stacked and interacting fields of color in pendant earrings.

The hand cut series, like so many ideas in the collection, show how Ron and David have turned over their ideas on jewelry for decades and lived up to their motto and name from I Ching, the Chinese philosophy, “One thing begets one thousand things.”

The Unexpected Story of a Master Jeweler, Pt. 1

Into the Woods with David Webb