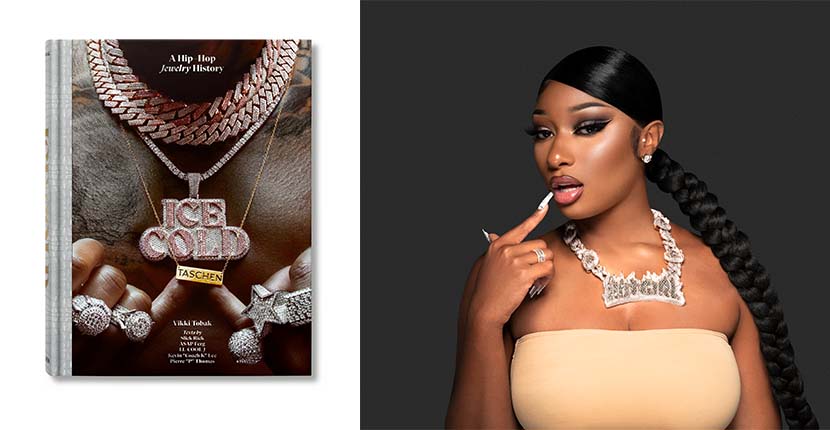 October 11, 2022—While I was reading Slick Rick’s Foreword in Ice Cold: A Hip-Hop Jewelry History by Vikki Tobak, I was reminded of something the Director of Queen Elizabeth II’s Royal Collection, Hugh Roberts, wrote in the Queen’s Diamonds:

“Kings and queens of England, since at least the sixteenth century, have subscribed to the view that diamonds should be accumulated as a necessary part of the outward show of monarchy and as a visible representation of the wealth and influence of the country and its rulers.”

Slick Rick was essentially saying the same thing in his essay titled “Jewels Are My Super Hero Suit.” The rapper, who was influenced by the attributes of monarchy while he was growing up in South London explained, “It’s a measure of how visual hip-hop is that we believe in the power of jewelry to communicate who we really are, a practice that dates back to the earliest folks in the hip-hop game.”

A$AP Ferg, the first hip hop artist to become a brand ambassador for Tiffany, echoed the sentiment in his introductory essay “Jewelry As Evolution”. “…I always looked at myself as royalty,” he wrote. “The language of jewelry is like a status symbol, and I understand how that power translates.”

Author Vikki Tobak picks up the subject and illuminates it in great detail in the 388-page large format book, that weighs 6.3 pounds. “With hip hop, the history of jewelry is woven into the fabric of the music,” she writes.

The book is divided into decades beginning in the 1980s and ending in the 2010s. The visual story telling is one of the most extraordinary parts of the book. Vikki not only shows incredible pictures of the artists in their jewels, she also gives lots of information in the captions about the designs including carat weights, anecdotes about the motifs and designers who made them.

Countless firsts in hip-hop jewelry are listed throughout the book. The first hip-hop jeweler was Tito Caicedo, who is also known as Manny. Vikki credits Biz Markie with igniting the trend for four finger rings. She walks step-by-step through the evolution of the words bling-bling including the moment in 2003 when it landed in the Oxford English Dictionary and how it began to lose its cool from mass use.

Vikki references sources of inspiration for designs that run the gamut from Liberace and Elizabeth Taylor to video games and anime culture. She deftly links certain silhouettes to historical forms. Perhaps the most prominent example is the traditional hoops of West Africa that inspired the door knocker earrings worn by the members of Salt-N-Pepa among so many others. As hip-hop grew and went global, Vikki explains how jewelry styles evolved from gold to platinum and motifs shifted into record label logos.

The vocabulary of hip-hop jewelry is carefully defined throughout the book. There are the big dookie rope chains Run-DMC popularized and the enormous “truck” jewelry of the 1980s. Grills—jewels custom made to be worn on the teeth—are also called grillz, golds, caps, slugs or fronts. Pavé-set diamond jewels are referred to as “flooded” and really the American slang makes as much sense to describe diamonds all over a jewel as the French term.

Beyond the bold jewelry, the greatest indicator of just how intrenched hip-hop stars were in the jewelry world can be heard in the lyrics of the music. Jacob the Jeweler, who became one of hip-hops go-to sources during the 1990s is mentioned in at least 70 songs.

Jay-Z casually dropped his knowledge about jewelry several times in lyrics. In the 1996 song “Politics as Usual,” he rapped “Took my Frito to Tito in the district, blessed me with some VS.” Vikki explained to me “Frito” is cash like chips. I knew the meaning of VS. It’s a diamond clarity grade.

In his inimitable way, Jay-Z used platinum and the lesser quality white gold as a metaphor like separating the sheep from the goats in his 1998 song “Ride or Die” from Vol. 2… Hard Knock Life. He rapped, “Time to separate the platinum from the white gold, right from the door.”

As you might imagine Vikki’s list of songs with jewelry references is long. She has organized some into a Spotify Playlist called Ice Cold that includes 84 songs mentioning jewelry.

Vikki’s review of hip hop jewelry history covers a lot of angles including the humor some artists expressed in their accessory choices. The chrome VW car emblem Mike D of the Beastie Boys once sported stands out as particularly hilarious. She also gets in the work of some of the new generation of hip hop jewelry design stars including Johnny Nelson and Bijules.

With the scholarly and specific approach to the subject as well as the impeccable visuals Ice Cold clearly establishes the importance of the genre in jewelry history. Vikki’s comprehensive knowledge of the field and the exact jewels worn by the stars once again reminds me of the Director of Queen Elizabeth II’s Royal Collection. It’s the authority she brings to the subject.

When I spoke with her about the evolution of the jewelry style, Vikki explained “It is incredible to look back at a moment in time the luxury world did not engage with hip hop to now when the luxury world understands hip hop power. What a full circle.”