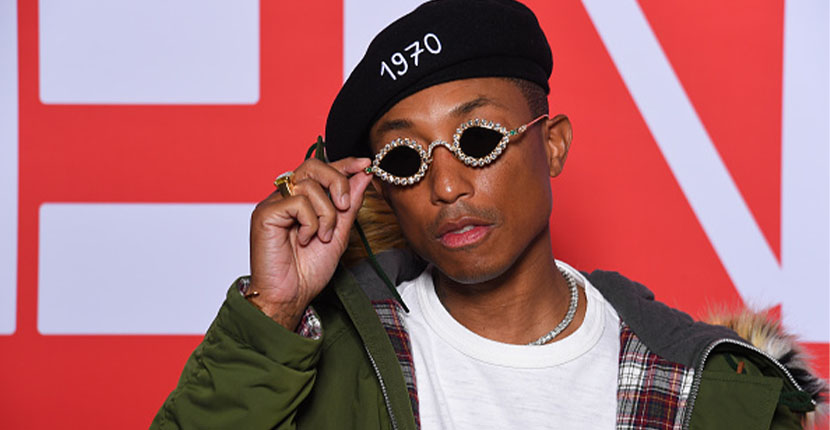 January 23, 2022—I know I am far from the only one who did a double take on the pictures of Pharrell Williams that flooded Instagram this morning. The American rapper had on an astonishing pair of diamond and emerald sunglasses custom designed for him by Tiffany.

The eyewear had the same silhouette as a pair of Mughal spectacles with emerald lenses that were offered by Sotheby’s in London on October 27, 2021. The antique glasses are named Emeralds for Paradise: The Astaneh-Ye Ferdaws emerald spectacles in reference to the Islamic association of the color green with that of paradise, salvation and eternity. The emerald lenses are dated circa 17th century and the frames are 19th century.

Before the Mughal glasses hit the auction block, they made the preview rounds and were absolutely irresistible to the journalists who saw them. Countless people posed in the emerald shades. Vanity Fair Jewelry editor Anabel Davidson brought her image back today and posted it side by side with the American rapper.

Back in the fall, Instagram wasn’t the only place to find news on the specs. The BBC, CNN, Art News, Architectural Digest were among the many major outlets that covered the rare treasures.

Sotheby’s told the BBC, “While ordinary lenses merely function to improve sight, these filters were aids for spiritual enlightenment—with diamonds thought to illuminate and emeralds believed to have held miraculous powers to heal and to ward off evil.”

The glasses were valued at a whopping $3.5-million. In the auction room, unfortunately, they failed to find a buyer. A fact that made me think at first glance when I saw Pharrell that he swept in as an underbidder. But then I realized his glasses were dark and the caption revealed they were new and made just for him by Tiffany.

Pharrell told WWD, “Tiffany and I are engaged.” His almond shaped shades composed of 18K gold are rimmed in 61 round brilliant-cut diamonds weighing a total of 25-carats. An emerald-cut emerald studs each of the temples.

It ends up Pharrell was wearing the glasses to tease a new design project with Tiffany. Makes me wonder are antiques going to inspire some new streetwear Tiffany styles? I suspect we will find out soon enough.

The performer has long loved jewelry. He has been a collector of gems for years. Pharrell often wears a big yellow diamond ring acquired from Lorraine Schwartz. And the image of him on the WWD Instagram shows he is wearing a paper clip bracelet, which could be the Virgil Abloh design or a Nadine Ghosn design, as well as an impressive diamond necklace. With the eclectic mix he sports, it is anyone’s guess what we will be seeing next.