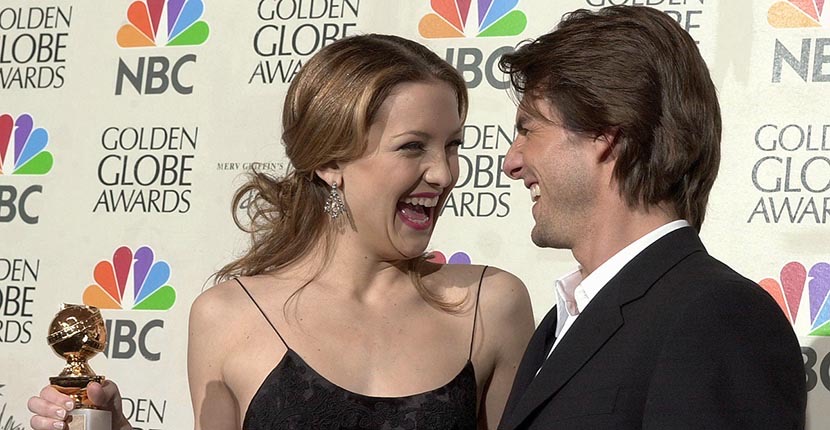 When Jewelry at the Globes Was Kind of Chill

January 11, 2021—In an alternate reality, we would be in Awards Season now. Of course, we are not. In fact, we are far from it. Anyway, I miss it. It’s not just the glamour and the fun of seeing jewels parade down the red carpet. A tone and trends are set on the red carpet for jewelry.

In the last several years, there has been a lot of dream jewelry dressing in the form of big-time treasures. But that’s not all there is. Lately, men in brooches and other jewels have been an exciting look to follow. Single earring and ear cuffs were ignited once they started going down the red-carpet. We also get to see which independent labels are on fire during Awards Season.

Since I am experiencing red carpet withdrawal and was looking for some distraction from the news, I thought it would be fun to take a look back at the event that traditionally kicks off the Awards Season, the Golden Globes. Specifically, I decided to focus on the often-overlooked period of the late 1990s and early aughts.

It is the era when I first started officially covering the jewelry on the red carpet for InStyle. Even though I covered the jewelry when it was worn, in retrospect the casual quality of the way people dressed and bejeweled, not to mention their no-makeup-makeup looks, is almost unbelievable. 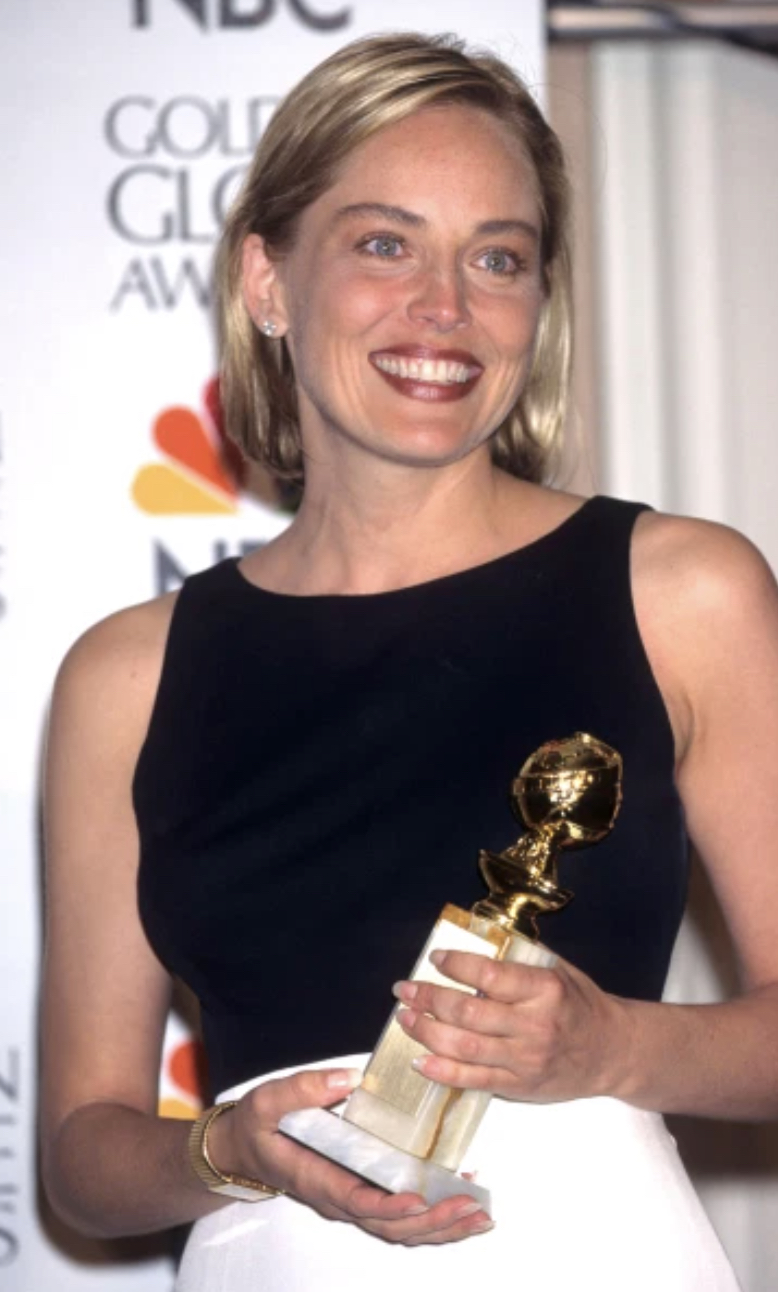 First, please forgive the quality of this photo. It was the best close-up image to be found on the photo archives. There just wasn’t the culture or demand for photos back in the day so there are not as many to choose from. (You can see more of Sharon accepting the prize here.)

Look at this image with the eyes of love and believe me when I say, Sharon was considered one of the most stylish actresses of the period and we were all thrilled to see her wearing diamond studs. Yes, diamond studs that are so disparaged by critics today were a thrill back then. She also has on a Quadrato Bulgari watch. Women often wore watches on the red carpet during the pre-cellphone era otherwise known as the Age of Innocence.

It was apropos that she had on Bulgari. Sharon won the prize for her role in Casino and Bulgari provided the epic amount of jewelry for the film.

In the beauty department notice she isn’t wearing nail polish. We went from this natural beauty moment to the brief catastrophe of the Mani Cam in 10-years. 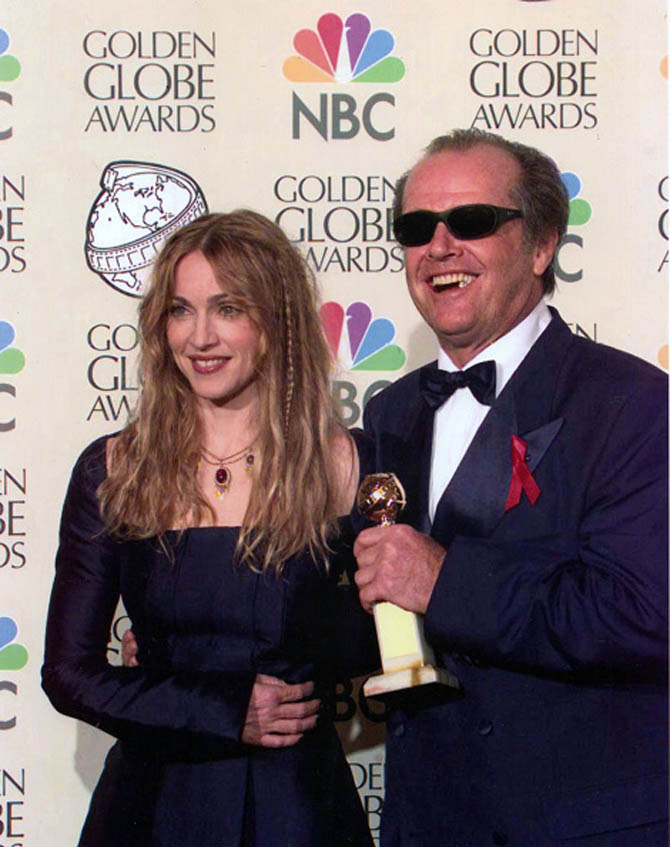 Any fan of Madonna can clearly see from this picture with Jack Nicholson that the star was in her Ray of Light album mode with the bohemian hair and non-body-con-frock. Personally, it was my favorite Madonna era, but I digress.

Any fan of jewelry can clearly see she is wearing a 19th century archeological revival necklace with tiered gold rope chain accented with garnet cabochons surrounded by tiny pearls and highlighted with gold fringe. 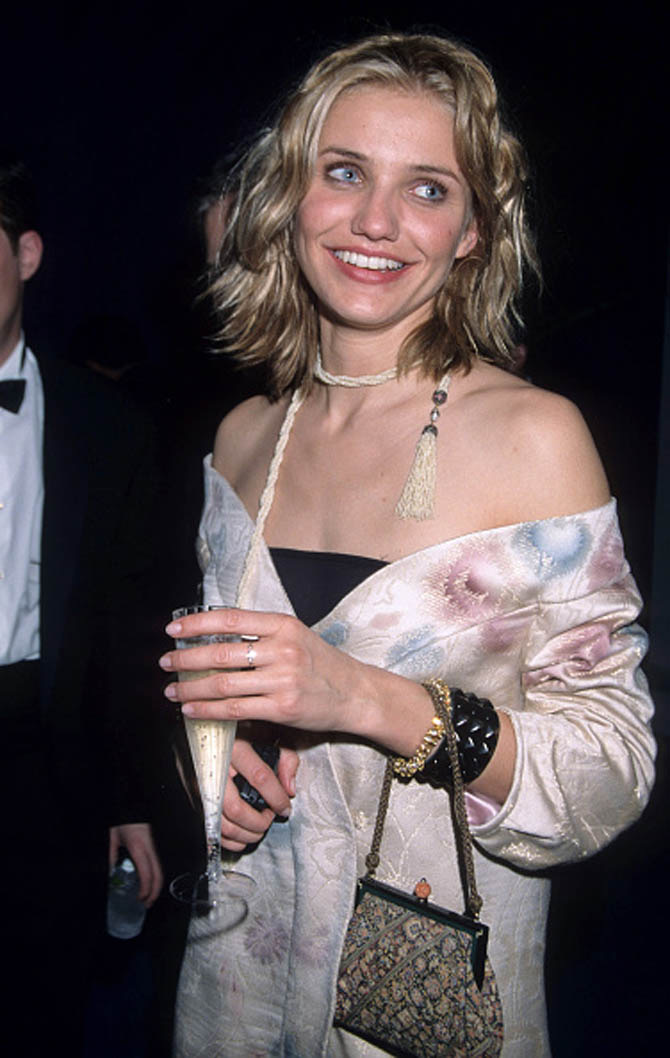 No one, but no one was as casual cool with jewelry on the red carpet as Cameron Diaz. At the Globes she effortlessly tossed on a divine pearl tassel sautoir and carried a vintage bag with a carved coral clasp that originally belonged to the Duchess of Windsor. Both came from Fred Leighton, one of the biggest names on the red carpet during the period when vintage ruled.

I have no idea what the jewels are on her wrist but they could be costume.

A couple of years later at the Oscars, Diaz slug an Indian necklace from Fred Leighton around her waist as a belt and put a $38 carved Lucite bead bracelet from Tarina Tarantino she had bought off a friend’s wrist the night before. “Cameron is a master,” said Fred Leighton at the time. “She makes everything look fresh.” 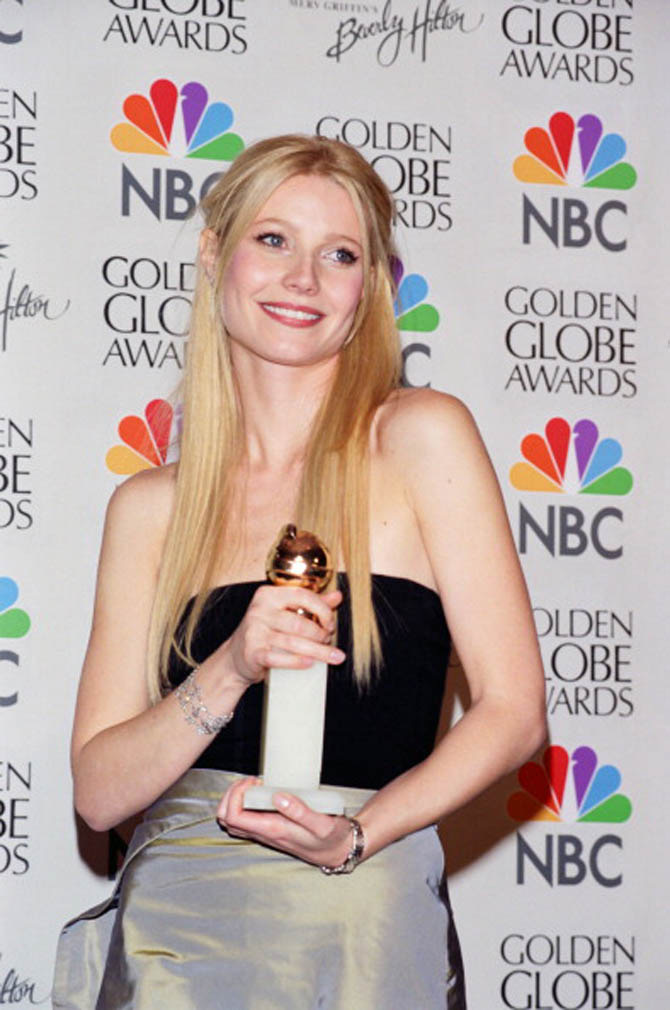 When Gwyneth Paltrow won the Best Actress prize in 1999 for her role in Shakespeare in Love, her style was very much in the minimalist mode of the era. It was similar to Sharon Stone a few years prior. Like Sharon, Gwyneth walked the red carpet in a cardigan, but she didn’t sling it over her shoulders she wore it as a cardigan.

Another similarity between the two actresses is the watch. Gwyneth is wearing her Cartier Panthere. It was a gift from Madonna who she was palling around with at the time. Find out more about it here.

I am pretty confident Gwyneth’s bracelet is from Cathy Waterman. The Los Angeles based jewelry designer was one of the absolute top choices at the time. She was local and often stars themselves, as opposed to their stylists, would swing by her charming studio and make their jewelry choices. Years ago Cathy told me, “I design two collections a year, not in the spring and the fall, but one around my birthday and the other around the Oscars.” Paltrow wore a very similar bracelet from Waterman the same year when she won the Oscar. 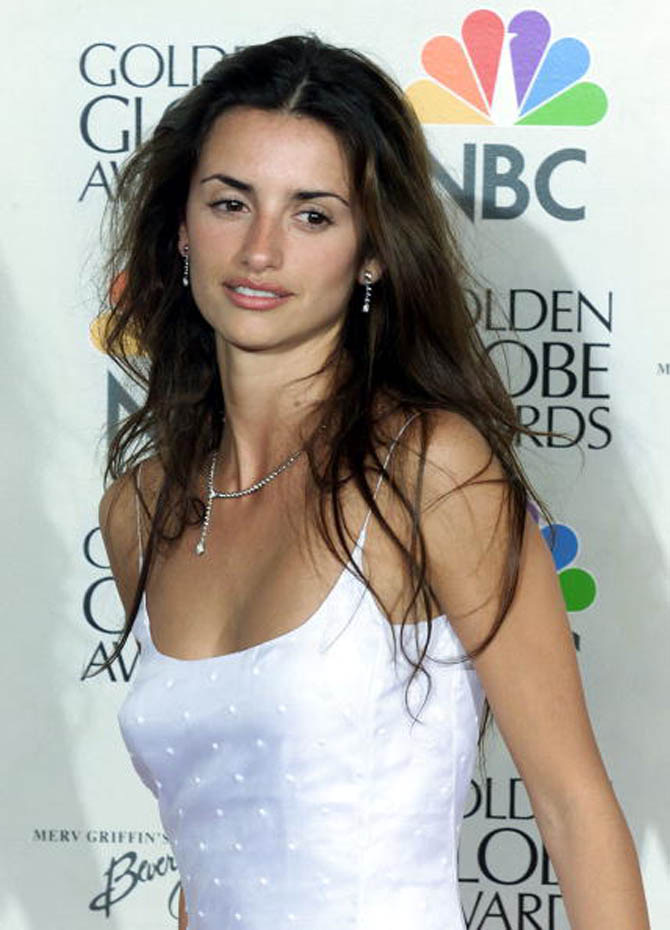 If anyone ever had the appearance of “I woke up like this,” it is Penelope Cruz at the 2000 Globes. The natural beauty barely looks as though she is wearing makeup. Her hair is a beautifully tousled bedhead mess. A deeper dive actually reveals it was raining on the red carpet, so there is a little reason to the rhyme of the look. But there is also epic nonchalance in the fact that she didn’t bother to have it brushed out once she got inside.

As for the jewels, her diamond necklace is kind of breezily askew. Her earrings just light up the whole thing. I feel pretty certain the demi-suite of diamonds is by Chopard. Penelope wore jewelry from the house almost exclusively for years. 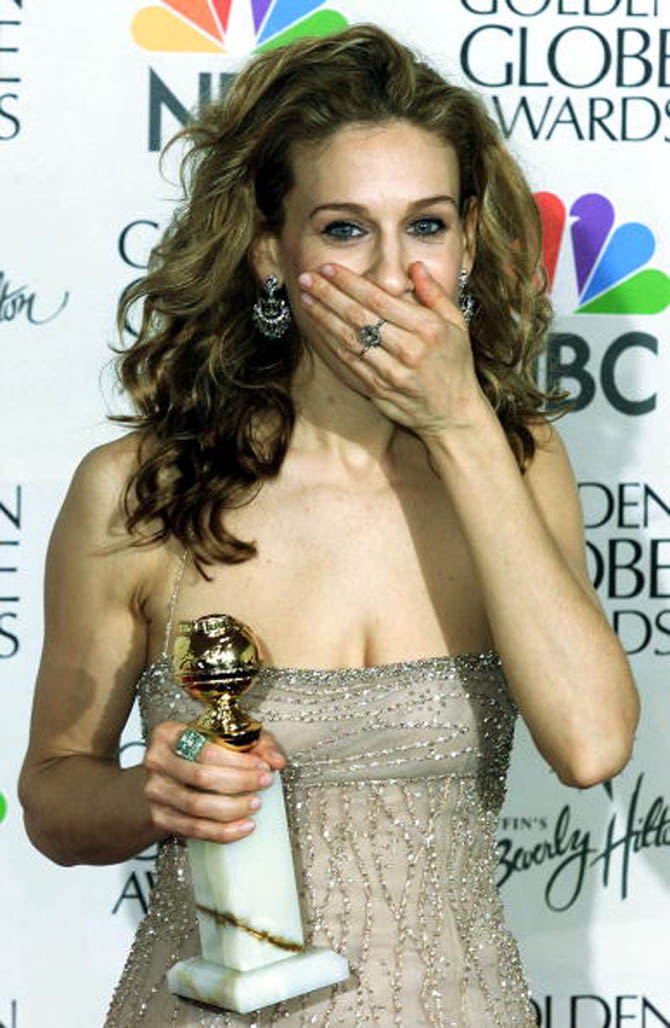 In 2000, Sarah Jessica Parker won her first Best Actress Golden Globe for her role in Sex and the City. She would go on to be nominated eight more times for the same part and receive the award four more times.

She began the epic run in a look that is pretty conventional for the style star: a taupe strapless gown and vintage as well as vintage inspired earrings from Fred Leighton.

One of the most notable aspects of the look is what happened later. SJP wore the same earrings the next year at the Golden Globes and at several other events. I can’t imagine any actress doing that kind of repeat jewelry performance today on such an important red carpet, but I loved it then and I still love the fact that she wore the jewels over and over again. 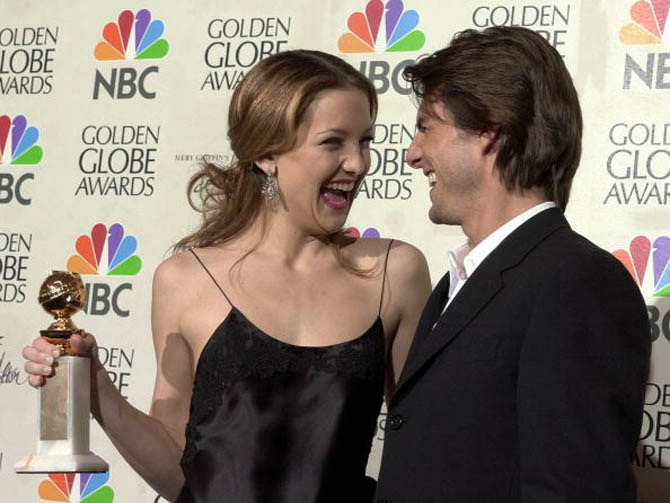 The Golden Globes are always touted as the “fun” awards show. If the photos from the 1990s and early aughts are any evidence, I actually think they were fun then. Clearly there was a lot less pressure on how people looked and what they wore. The styles were pretty effortless and the jewels brought some nice sparkle to the gowns.

In 2001 when Kate Hudson won the best actress prize for Almost Famous, she epitomized the most well-known look of the period: a slip dress and vintage jewels. There is also the pure joy in her celebration backstage with Tom Cruise.

What’s Wrong With That Bed Full of Bling In Casino?