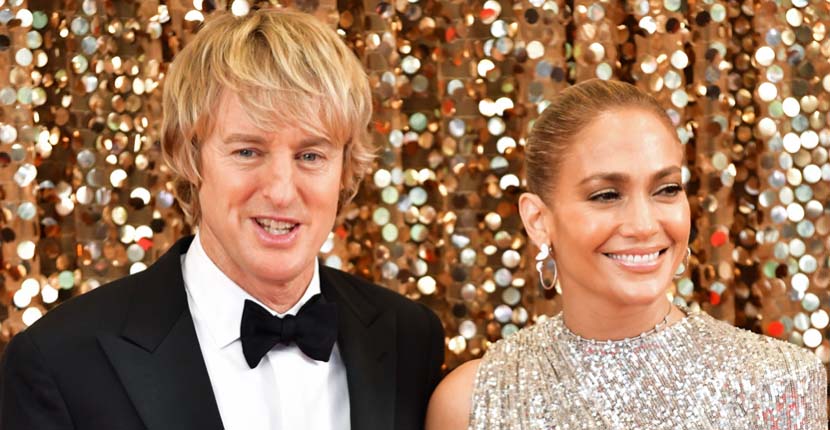 JLo’s Diamond Jewelry in ‘Marry Me’ Is Major

February 13, 2022—Marry Me has so much detail in the story that echoes Jennifer Lopez’s real life, it makes it easier to suspend disbelief about the Hollywood fairy tale plot lines of the delightful romantic comedy. The costumes and diamond jewelry all felt very JLo, but more on that in a moment.

The fantastical part—which is fully revealed in the trailer so not a spoiler—happens when Jennifer who plays pop star Kat Valdez agrees to marry someone in the audience. That someone is a math teacher named Charlie Gilbert (Owen Wilson), who is inadvertently holding a sign that says “Marry Me.” This surprise move comes after Kat finds out her popstar boyfriend Bastian (Maluma), who she was going to marry during the concert, was cheating on her.

If you are wondering, I know I was, Jennifer Lopez was still with her fiancé Alexander Rodriguez when she filmed Marry Me in 2019. Their April 2021 breakup was rumored to be because she found out he was cheating on her with Madison LeCroy. As you undoubtedly know, Jennifer moved on rapidly and returned to her 90s flame Ben Affleck. But I digress.

Other facts of Jennifer’s real-life worked into the fiction of Marry Me, which is in theatres and streaming on Peacock, are Kat’s luxury lifestyle and multiple endorsements including one with Coach. And then there is her style in the film. True JLo aficionados could probably tell the difference between her on-screen and off style, but I thought it seemed very much like the way she dresses in real life. The clothes are lit up with lots of great diamond jewelry.

In one early vignette when Kat is getting ready for the concert where she is going to marry Bastian, a member of her support staff (Michelle Buteau) shows her a major statement necklace Pasquale Bruni has sent as a wedding gift. Kat says, “Let’s pack it for the honeymoon.” The piece was transformed into a meme on the Marry Me Movie Instagram.

Most of the splashiest diamond jewels in the production came from Pasquale Bruni. The 50-year-old Italian label was the official jewelry partner of the movie.

For the wedding concert when Kat Valdez switches grooms, she wore a Zuhair Murad couture dress with so many layers of tulle it weighed 95 pounds. The giant gown was paired with a couple of pieces of Pasquale Bruni: the Giardini Segreti Necklace and Earrings. Both jewels are composed of 18K rose gold, white and champagne diamonds

For the odd couple’s first press conference after the wedding where they both handle the reporters with humor and ease, Jennifer pairs her cutout white blouse with the same Pasquale Bruni Giardini Segreti Earrings she wore during the concert.

Once Kat and her math professors have settled a little bit into their relationship, they hit a red carpet. For the event, she wears Pasquale Bruni’s Petit Garden Earrings set with 2.7-carats of diamonds.

For a performance with Bastian, Kat wears diamond pendant earrings by Yeprem.

Beyond the big diamond Pasquale Bruni statement pieces, Kat wears lots of other layering jewels in the movie including diamond rings galore. She sports them on several fingers.

She also layers gold jewels and a locket engraved with the word “Sing.” It’s a gift from her former flame, Bastian. When Charlie asks what it means, she says “It means don’t let them win.” The phrase feels something like a JLo motto in real life.

Watch the trailer below to see several of the Pasquale Bruni jewels featured in Marry Me which is streaming on Peacock and in theatres.