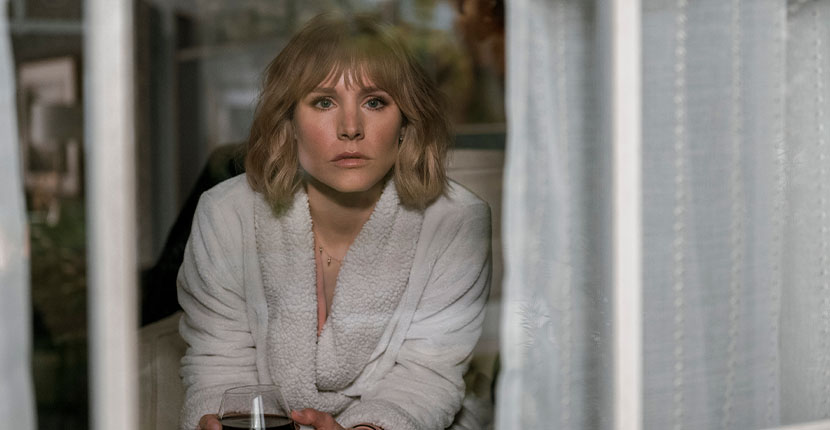 Kristen Bell wearing her own gold and diamond Sarah Hendler necklace in 'The Woman in the House Across the Street from the Girl in the Window.' Photo Netflix

Kristen Bell Wore Her Own Necklace On New Show

February 1, 2022—Kristen Bell’s new Netflix satirical murder-mystery slash dark-comedy miniseries not only genre hops, but it also has one of the longest titles of a show in history: The Woman in the House Across the Street from the Girl in the Window. But that’s not really our point or concern here.

Throughout all 8 thrilling episodes of the show, which was released on Friday and is currently ranked number one on the streaming platform, Kristen Bell wears Sarah Handler’s 5 Point Pavé Center Spear Collar Necklace. The gold and diamond jewel features the designer’s signature spear motif that’s inspired by elements found in Victorian era jewelry.

This kind of high-profile jewel in a production would normally be sourced by a show’s costume designer. Kristen, however, chose it from her own jewelry box.

“Kristen and I had met a while ago through her stylist Nicole Chavez,” explains Sarah. “At one point during the height of the pandemic, she saw me promoting a charitable initiative of donating 30% of sales to No Kid Hungry on Instagram and bought the necklace. As soon as she got it, she began wearing it all the time.”

Flash forward to the filming of The Woman in the House Across the Street from the Girl in the Window and Kristen decided to wear the jewel in the miniseries.

“It’s the easiest everyday necklace I’ve ever worn,” Kristen delightfully explained. “It might be the only necklace anyone ever needs! Wearing it for this show was just a no brainer. Simple, chic and a little sexy.”

Sarah was, of course, beyond thrilled when Kristen told her she was wearing it on the show. “It did cross my mind that she might need a backup on set,” remembers Sarah. “I began my career working on film sets, before I switched to jewelry, and you always need a dupe of items in wardrobe in case something happens.”

Lo and behold, one day when Kristen went home wearing her jewel, her dog jumped on her and it broke. “I was so relieved we had another one in stock,” explained Sarah. “We are a small company and make everything in Los Angeles. We don’t have a lot of inventory so it was kind of a miracle. Naturally, we fixed Kristen’s original necklace.”

It was all a very happy ending for the Sarah Hendler necklace in The Woman in the House Across the Street from the Girl in the Window. As for what happens in terms of the murder you will have to tune into the show. There are no spoilers here. Dun dun dunnn.