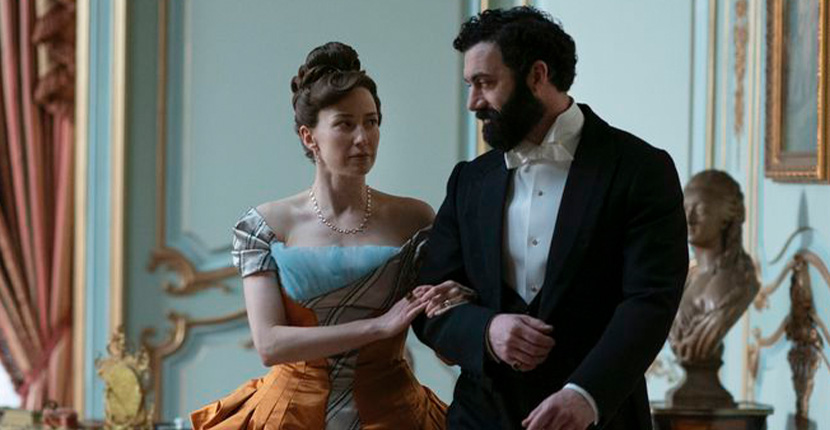 It all comes from Temple St. Clair and belongs to Mrs. Russell

January 28, 2022—New money has arrived in New York City and it is cause for alarm with the old money crowd who have been the head of elite society since before the Revolution. The time is about 1882 and the scene is set in Episode 1 of HBO’s The Gilded Age.

Created by Julian Fellowes, the mastermind and writer behind Downton Abbey, this new series features lots of the familiar plotlines. Members of society clamor for position. There is upstairs-downstairs gossip. And the settings are as luxurious as can be.

One of the most eye-catching differences between The Gilded Age and Downton Abbey is the quality of the jewelry. While most of the baubles worn in the British series were costume, many of the jewels worn by the main character of the new money crowd, Bertha Russell (Carrie Coon), are very much the real deal.

Almost all of Mrs. Russell’s fine jewels come from the New York based designer Temple St. Clair. In Episode 1, five of Temple’s pieces are worn. They are all in shades of blue which is the main color in Bertha’s clothing palette. While the pieces are not necessarily true to the period, they fit right in with the glorious costumes.

So how did the costume design team working on a late 19th century period drama find a contemporary New York designer whose work references everything from the Italian renaissance to the cosmos?

A dreamy editorial image of a model styled like a woman from a John Singer Sargent painting wearing one of Temple’s necklaces and an amulet was the thing that inspired the costume design team to reach out to her.

“We found them to be perfect for the character Bertha, who is on the forefront of bringing the latest in Parisian style and sensibility to New York. Temple’s jewelry was an effortless tool in recreating the excitement of new fashions that were emerging at the time of the Gilded Age.”

Moonstones appear in almost all of Mrs. Russell’s jewels. She wears Temple’s Halo earrings repeatedly. “The gem is a really important one for me,” explains Temple. “It carries the quality of the past, present and future which is something Bertha represents in the show.”

While most of Temple’s jewels seen in Episode 1 are classics from her collection, there is one piece of High Jewelry. The Galaxy Necklace is a statement piece Bertha wears during dinner.

“The construction makes it feel soft, like a textile when you wear it,” explains Temple. “The layout expresses the beauty of mathematical equations in luminous moonstones with diamonds set in between.”

All of this jewelry action happened in just the first episode. Temple says she loaned more to the production. I think the chances we will be seeing different treasures from the designer on Mrs. Russell throughout the series are as good as the possibilities of romance and scandal.

See several of Temple’s jewels in the trailer for The Gilded Age below.

Antique Tiaras Tell The Story in the Downton Abbey Movie