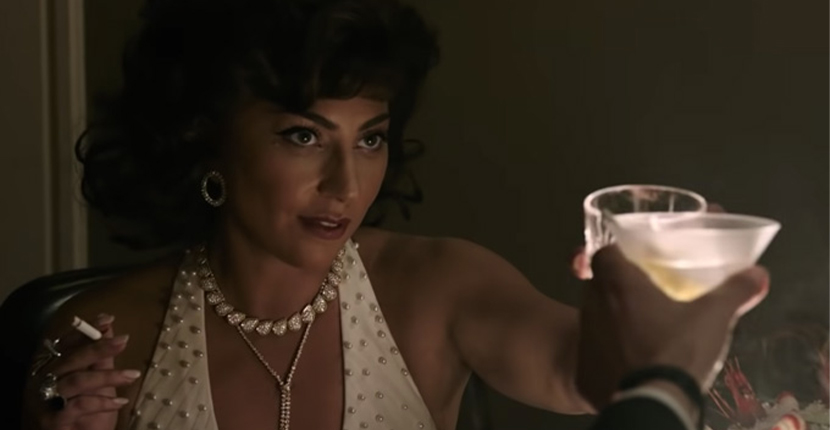 November 29, 2021—The film critics had mixed reviews about House of Gucci, but the fashion flock and this jewelry journalist loved all two-hours and thirty-eight minutes of the high camp production. Based on Sara Gay Forden’s book the true story depicted in the plot revolves around the greed, excess and murder that ultimately brought down the Gucci family.

Naturally, the film is filled with fashion. There is also a vault worth of jewelry. Costume designer Janty Yates told British Vogue’s Rachel Garrahan, “LG [Lady Gaga] had 54 script days on set and we did not repeat anything, not even an earring,”

The first glimpse of jewelry spotted on Lady Gaga as the outrageous Patrizia Reggiani, who married into the Gucci family, was revealed months ago in the first trailer. The star’s biggest baubles came from Bulgari’s High Jewelry and Heritage collections. Find out about them here.

Many of the costume pieces in the film were provided by the Italian firm Pikkio Srl. The company has an archive of jewels made in styles beginning with ancient Egypt and going on up to the 1980s that they loan to film productions. For House of Gucci, Pikkio provided several looks including the chain necklaces Gaga wore with a skiing ensemble and the bold necklace and ball earrings she wore with a red suit.

The legendary French fine jewelry house, Boucheron, provided nine jewels Gaga wore in the film. She piles on several for one evening scene out on the town with Maurizio Gucci (Adam Driver). They include the diamond and gold Serpent Bohème necklace, diamond and pink gold Pompon Necklace and the yellow gold and diamond Serpent Bohème bracelet.

Other Boucheron pieces that are confirmed Gaga wore in the film include three animal rings: Cypris, the Swan; Fuzzy, the Leopard Cat; and Meisa, the Chickadee. I will admit these beautiful creatures flew by me in the movie theatre. I didn’t see them. When the production begins streaming, I will be looking closely for the rings.

There were also two bracelets from Boucheron’s collection that blended in with everything Gaga wore in the film. They are the Quatre Classique bracelet and the Vendôme Chromatique bracelet.

The Boucheron item that received a long close-up at the beginning and end of the film was a watch worn by Adam Driver along with his double G Gucci logo pinky ring. The Epure model is 42 millimeters and composed of pink gold. It looked amazing on screen. You could immediately tell the piece was real gold.

The chunky band engagement ring worn by Lady Gaga in the movie is one item I have not identified yet. It’s actually the only piece of jewelry that plays a little role as a prop. After Driver tells Gaga at least the name on the Gucci fakes isn’t hers, she fires back holding up her hand and pointing to her engagement ring, “Our name, Sweetie.” If the designer of the ring is revealed, this post will be updated.

The Tiffany Schlumberger diamond and gold ring Gaga held up during the House of Gucci premiere in London, making the same gesture, is not the jewel she wore in the movie. Tiffany did not lend jewelry to the production.

Diana’s Pearls Are a Major Part of ‘Spencer’