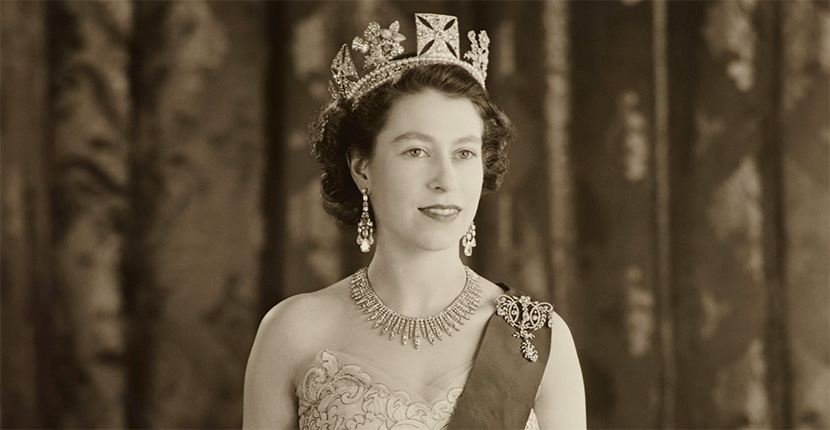 June 2, 2022— “I have to be seen to be believed,” Queen Elizabeth II, who is celebrating her Platinum Jubilee over the course of the next four days, once famously quipped.

Countless fashion journalists have covered how the Queen has not only shown up and been seen over the years, she has also clearly stood out among crowds with her colorful ensembles.

What few in fashion have noted about these carefully crafted looks is that they have always—undoubtedly with great intention—acted as magnificent backdrops to show off the Queen’s jewels. After all, it’s the jewels that no commoner or royal for that matter, could ever really imitate. It’s the jewels that transform Her Majesty’s 5’3” frame into a towering royal figure.

In honor of the Queen’s monumental Platinum Jubilee celebrating her historic and unprecedented 70 years on the throne, it seemed apropos to take a look back at the most dazzling platinum and gem-set jewels in her vast collection of treasures.

Read on to find out the stories behind the designs.

The Cullinan V Diamond and Platinum Brooch by Garrard

The Queen tosses on her diamond and platinum Cullinan V brooch, an incredibly historic design, as easily as most of us sport a pair of jeans. The jewel, which is clearly one of her favorites, has been in Her Majesty’s main rotation for years.

During London Fashion week in 2018, the brooch was part of a break-the-internet moment. The Queen wore it while she sat in the front row with Anna Wintour to watch the Richard Quinn fashion show and present the emerging talent with the inaugural Queen Elizabeth II Award for British Design.

Made in 1911 by the British jeweler Garrard for Queen Elizabeth’s grandmother, Queen Mary, the design centers on the 18.8-carat heart shape Cullinan V diamond. The gem was one of 105 stones cut from the 3,106.75-carat Cullinan, the largest diamond ever discovered.

The Cullinan V brooch shows off many of the various types of techniques jewelers added to platinum designs during the early years of the 20th century. Knife-edge platinum spokes spread out from the center. Swirls of the metal embrace smaller diamonds on the frame. Millegrain, small beads, cover the surface and add delicate texture. All of these flourishes were possible with platinum because of the metal’s strength.

The Williamson Pink Diamond and Platinum Brooch by Cartier London

The Williamson Pink Diamond and Platinum Brooch has been part of the Queen’s ensembles for several very special occasions. During her Silver Jubilee, she wore the jewel for the central day of the festivities on June 7, 1977.

Among the other events when she has put on the brooch are the royal weddings of two of her children: Prince Charles to Diana in 1981 and Prince Edward to Sophie Rhys-Jones in 1999.

The 23.6-carat Williamson Pink Diamond was a wedding gift the Queen received from the Canadian geologist, Dr. John Thorburn Williamson, who owned the Mwadui mine in Tanzania where it was discovered.

In 1953 Cartier in London set the pink diamond in a platinum and white diamond flower brooch. Multiple diamond shapes highlight the almost 4-inch-long jewel. Platinum curves around the edges of the petals on the flower adding a natural quality to the design.

The Delhi Durbar Necklace by Garrard

As the title of this platinum, diamond and emerald jewel suggests, it was made for Queen Mary to wear at the Delhi Durbar in 1911. The event marked King George V’s ascension to the British throne and by extension also becoming the Emperor of India which was still under British rule.

When Mary died in 1953, she bequeathed the jewel to Queen Elizabeth. Her Majesty wears the necklace at formal dinners. In the picture above, taken around 1970, she put on the jewel with a mod dress, tiara and emerald earrings.

The Delhi Durbar necklace is a negligee style design which means it has two asymmetrical strands at the front. Generally, platinum negligee necklaces made in the first quarter of the 20th century were delicate with small diamond accents.

The Queen’s Delhi Durbar necklace is the opposite scale of the typical styles. Hers has giant cabochon emeralds and diamonds. At the end of the strands is a pear shape cabochon emerald and the 8.8-carat Cullinan VII diamond.

The Greville Chandelier Diamond and Platinum Earrings by Cartier London

During the early years of her reign, Queen Elizabeth routinely wore the glamorous Greville Chandelier platinum and diamond earrings made by Cartier in 1929. She received the jewels as wedding presents from her parents King George VI and Queen Elizabeth.

The monarch’s mother inherited the earrings as well as many other jewels in 1942 from a British heiress named Margaret Greville.

The Greville Chandelier diamond and platinum earrings are textbook Art Deco designs. During the era various fancy shaped diamonds—some of which lapidaries were beginning to cut for the first time—gave jewels the style’s signature geometric look. Some of the fancy diamond shapes in these almost three-inch long earrings are half-moon, trapeze, square, baguette, baton and emerald-cut stones.

By the 1920s, platinum was well established as the best metal to be used in important jewelry. The platinum setting in the Greville Chandelier Earrings follows the lines of the gems in the body of the earrings. Pear shape diamonds dangling at the bottom are held in place by platinum prongs.

A few of Queen Elizabeth’s many diamond and platinum brooches represent the emblems of Commonwealth countries. One of her most well-known is the Canadian platinum and diamond Maple Leaf. The Queen’s Diamond and Platinum Australian Wattle Brooch is another example.

Made by the Melbourne based jeweler William & Drummond Co., the Australian Wattle brooch, which is a representation of the national flower, was presented to the Queen on her first visit to Australia in 1954. Over the years, she has coordinated the jewel with yellow and green outfits highlighting the yellow diamonds in the design.

There is an elegance in the way the master craftsman worked platinum into thin lines to show off the gems in the Australian Wattle Brooch.

It is one of the jewels chosen by the curators at the Royal Collection Trust to be part of the Queen’s Platinum Jubilee exhibitions. This piece will be among the historic display at Windsor Castle commemorating Her Majesty’s Coronation at Westminster Abbey on June 2, 1953.