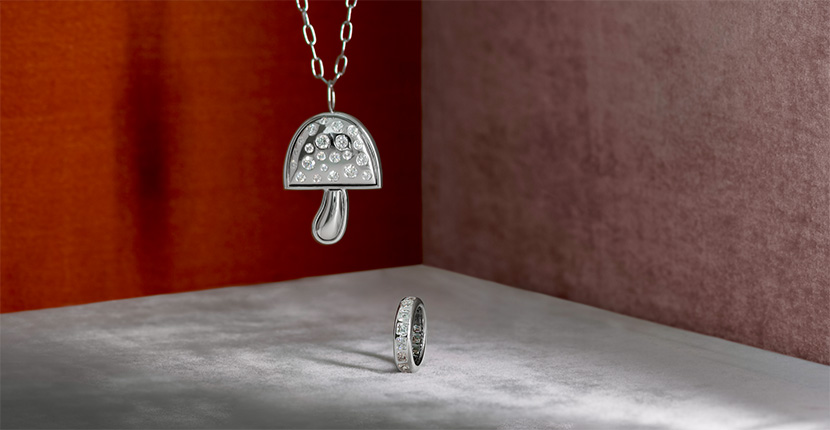 June 3, 2022—Jewelers around the world are celebrating Queen Elizabeth II’s Platinum Jubilee by doing what they do best: making amazing jewels.

Most of the platinum pieces created to acknowledge the festivities surrounding the Queen’s 70th anniversary on the throne have a very regal tone. Think tiaras and statement pins.

But a handful of eight of the hottest designers working today, namely Brent Neale, Harwell Godfrey, Retrouvaí, Spinelli Kilcollin, Stephen Webster, Suzanne Kalan, Walters Faith, and Zöe Chicco, have partnered with the Platinum Guild International, USA and the COUTURE jewelry show at the Wynn Las Vegas to make platinum jewels that have a decidedly different tone. The jewels are luxurious to be sure, but also ready-to-wear daytime designs.

Some in the group riffed on signature gold styles in their collections. Others made entirely unique pieces. All, who generally work in gold, came out of the experience with a newfound love and respect for the King of Metals.

Find out more about the jewels and what the experience of working with platinum was like for the designers below.

British designer Stephen Webster has always had the reputation among jewelry fans of being a rock n’ roll type. Seemingly the whole world learned about Stephen’s character a few months ago when they saw the engagement ring he created for Machine Gun Kelly to give Megan Fox. What many people, however, still don’t know about Stephen is that he is a master jeweler who began his career working on the bench. In fact, he marks the beginning of his professional life to the year Queen Elizabeth celebrated her Silver Jubilee.

For Her Majesty’s Platinum Jubilee, Stephen designed an embrace platinum Thorne ring, which is actually two rings, covered in diamonds and centering on a royal blue tanzanite. The clean edges of the design suit platinum’s properties that can be worked into fine details.

“Platinum is a very satisfying material that requires time to work with,” explains Stephen. “There is a lot of heat needed to solder it and you have to be patient when you are finishing it, but the end results endure because of the strength of the metal.”

Brent Neale designed two platinum and diamond pieces for the collab—a Mushroom pendant and eternity band. The jewels show the playful and classic side of Brent’s wildly popular line which is collected by Blake Lively and Gwyneth Paltrow among many others.

“I liked working with platinum because it was something very different for me and specially to these pieces it was fun to do these styles in such a different material,” explains Brent. “The platinum really makes the white diamonds pop.”

Designer Lauren Harwell Godfrey, who has received multiple accolades for her jewelry in the last couple of years, chalked up another achievement when she was selected as a 2022 finalist in the CFDA/Vogue Fashion Fund.

One of the things that undoubtedly slid Lauren’s work into the group was her talent with colorful gems set in bright yellow gold. Now the designer has proven she is equally skilled with diamonds and platinum. “I was so excited to see this ring come to life and open up the possibilities for a cool-hued, neutral palette going forward,” explains Lauren. “I’m anticipating doing more bridal as well, so I see a lot of platinum in my future.”

The immediately recognizable work of Suzanne Kalan is defined by a jumble of variously sized baguette-cut diamonds. While the designer often uses gold for these jewels, she adores working in platinum too. “Platinum is extremely durable and strong making it not only ideal for jewelry that’s worn daily but also means it does a better job of holding the diamond in place for the long term,” explained Suzanne.

Platinum also allows Suzanne to freely scale up the size of her jewels. “It gave me more confidence to use larger diamonds as platinum allows more security with holding a gemstone in place,” says Suzanne. There are over 9-carats of diamonds in Suzanne’s ring for the collab.

“It’s a more labor-intensive metal to work with, but it’s density and durability allowed us to create the clean crisp fluted lines in our bracelet,” says Mollie. “We love the naturally pure white color of platinum and when it is set with colorless diamonds it’s so bright.”

Retrouvaí designer Kirsty Stone’s Magna collection is all about interlocking channels. They are shapes designed to symbolize strength. Up until now she has never made a necklace in the collection or employed platinum on the designs.

The white metal proved to be totally apropos for the line since it is the strongest precious metal. It also (as so many have mentioned) looks fabulous with diamonds. “When pieces are diamond-focused and have less of a heavy metal design, platinum is always my personal choice,” says Kirsty.

Designers Yves Spinelli and Dwyer Kilcollin of Spinelli Kilcollin link the mythical ideas surrounding Ceres to their new platinum and diamond ring which would work beautifully as a wedding band or engagement ring.

In ancient Roman bridal ceremonies, Ceres’s torch leads the procession. And in Greek mythology, Ceres guides the laws of marriage. Spinelli Kilcollin represented the two ideas with connected bands of the Ceres ring.

Zöe Chicco has been designing her beloved toss it on with a t-shirt and ripped jeans collection of easy-to-wear jewels for over 20-years, but she never worked in platinum until now.

“I love how the finished pieces came out!” enthused the designer. “There is a really nice weight to the platinum that just feels luxurious and it really complements the diamonds so well and makes them the stars of the show.”