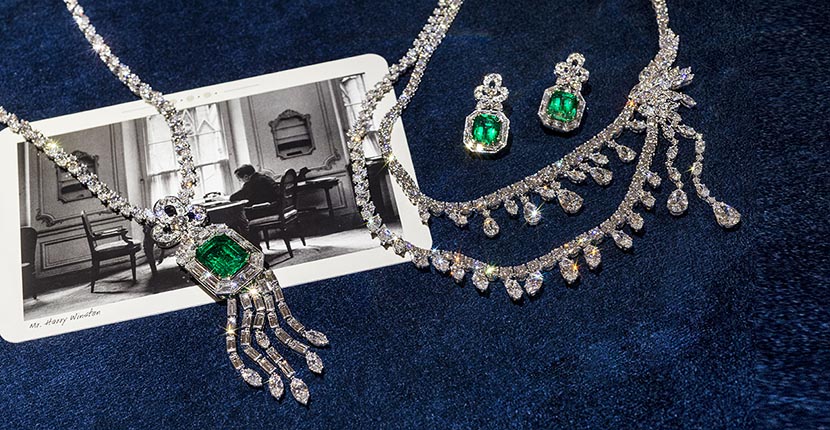 A postcard of Mr. Harry Winston with the 718 Emerald Vitrine necklace and earrings and the 718 Chandelier necklace from The New York Collection by Harry Winston Photo Andrew Werner

Harry Winston, the man universally known as the King of Diamonds, had a way with words. “It’s like a soft, beautiful day in June,” Winston once said when he was describing an important diamond. He went on to add, “It talks to you. In fact, it sings to you.” One of his most frequently quoted lines, that has become something of an internet meme, was about wearing his amazing jewelry. He said, “People will stare, make it worth their while.”

All the jewelry created at Harry Winston today embodies the spirit of the founder who passed away in 1978, but perhaps nothing quite as much as The New York Collection. The 32-piece collection is a tribute to things that held meaning for Mr. Winston in the city. New York sculpted his dynamic character. It is where he was born, where he found so much inspiration and created his legendary jewels. 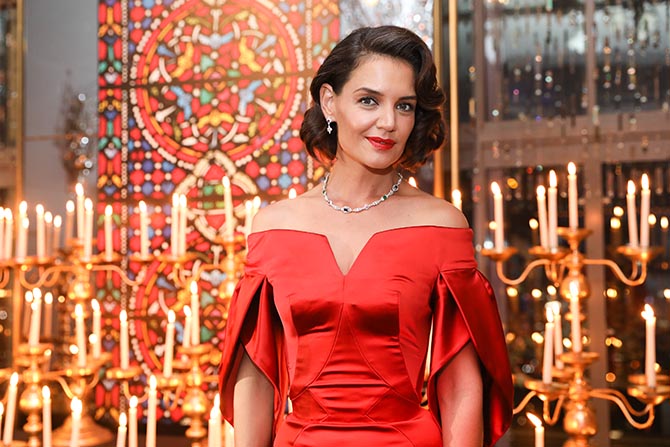 Kate Holmes wearing the City Lights necklace at the party in the Rainbow Room on September 20, 2018, celebrating the launch of The New York Collection by Harry Winston. Photo courtesy

The Winston design team and the master craftsmen who made The New York Collection used an approach similar to Mr. Winston’s during the 1940s, when he conceived the holly wreath setting. Mr. Winston looked at the holiday decoration hanging on his door and recognized it as the perfect analogy for a necklace. The shape of the leaves and berries inspired his layout of marquise, pear and round diamonds and the flexible platinum setting that is virtually hidden under the stones. Winston’s luxurious creation resembled a holly wreath without being too literal.

The jewels in the The New York Collection follow the same pattern. Each piece is an artistic hat tip to Mr. Winston’s New York icons, not an exact figurative representation. The Central Park Mosaics bracelet, for example, looks like a bird’s eye view of the gorgeous landscape that inspired Mr. Winston. It is rendered in a pattern of emeralds, sapphires, diamonds and aquamarines.

A sketch of Central Park Mosaics bracelet and the Eagle earrings from The New York Collection by Harry Winston. Photo courtesy

The Eagle earrings featuring diamond wings, that spread over the lobes, reflect the cast iron birds about to take flight near Grand Central Terminal. The earrings allude to the romantic first meeting of Harry Winston and his beloved wife Edna on a train trip.

The City Lights necklace, worn by Katie Holmes at the launch party for the collection, captures the colors that shine at night on Broadway. It’s a reference to Mr. and Mrs. Winston’s passion for the theater. Rubies, emeralds, sapphires and yellow diamonds twinkle in the white diamond jewel. 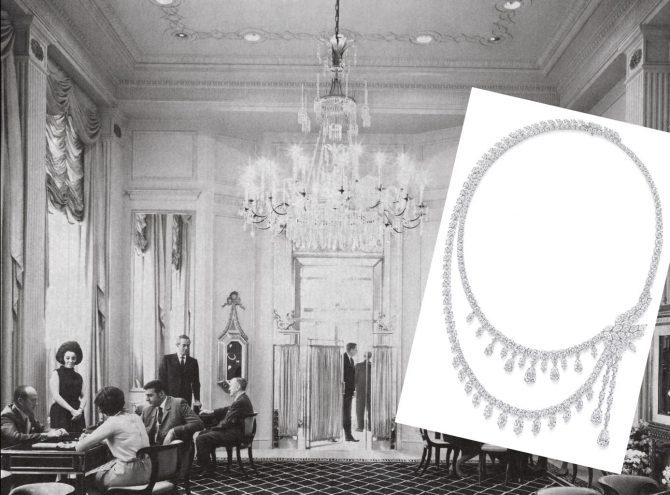 An image taken of the Harry Winston flagship in 1969 shows the chandelier and emerald-shaped vitrines with bows. The inset image is the 718 Chandelier necklace. Photo courtesy

Several stunning pieces in The New York Collection take design cues from the iconic Winston flagship salon at 718 Fifth Avenue. In 1960 Mr. Winston moved his business into the five-story townhouse situated on the corner of 56th Street after he fully renovated the building into a glamorous boutique. The exterior was remodeled in an 18th century-mode with a façade of travertine and picture windows. The jewel box interior décor has several exquisite and now signature design details. 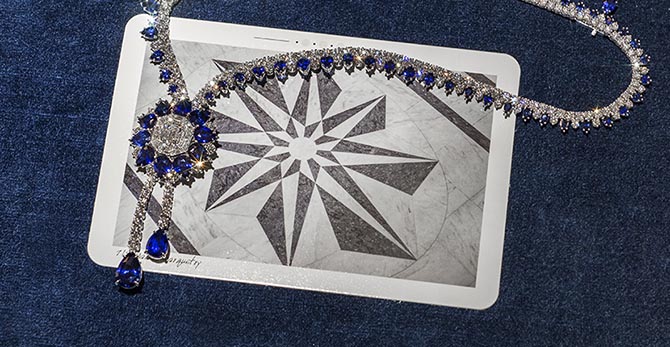 The 718 Marble Marquetry sapphire and diamond necklace echoes the graphic pattern on the floor of the flagship seen in the postcard and found in every Harry Winston boutique today. Photo Andrew Werner

The grand chandelier that illuminates the space inspired the 718 Chandelier necklace. The asymmetrical design is composed of 244 pear-shaped, marquise and round brilliant diamonds weighting a total of 72.10 carats, set in platinum

The dramatic black and white marble marquetry covering the entryway provided a sort of blueprint to the graphically patterned 718 Marble Marquetry necklace. The gorgeous gems in the jewel include a 2.77 carat emerald-cut diamond center stone with 69 pear shaped sapphires weighing a total of 48.53 carats and 204 baguette and round brilliant diamonds weighing a total of 35.57 carats, set in platinum.

The custom wall vitrines created in the outline of an emerald-cut, Mr. Winston’s favorite gem shape, inspired the 718 Vitrine Necklace set with a 16.63 carat emerald-cut Colombian emerald. The gold tone frames with graceful bows that sweep above the display cases are echoed in the jewel in diamonds. The exact number of diamonds in the jewel are 152 baguette, marquise, trapezoid and round brilliants weighing a total of 53.14 carats. 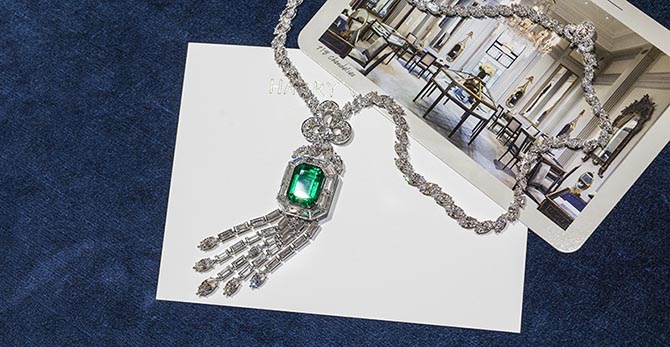 The pendant on the 718 Emerald Vitrine necklace reflects the silhouette of the vitrines at the Winston flagship. Photo Andrew Werner

Looking at the New York Collection, it’s hard not to wonder how Mr. Winston in his singular way would have described the jewelry. I feel like he would have waxed on even more poetically than he did about that diamond being like a beautiful day in June. I know I would have sat down with the legend and used Marilyn Monroe’s line from her signature song Diamonds Are Girl’s Best Friend, “Talk to me Harry Winston, tell me all about it.”

See more of the 32 pieces in the New York Collection on HarryWinston.com. The one-of-kind jewels will be on tour at various Harry Winston boutiques internationally. During October, they will be in Japan. In November the jewels travel to Shanghai. In December they will be back in the United States. Contact Harry Winston for further details or to schedule an appointment for a private viewing.

*This post was created in partnership with our friends at Harry Winston. Special photography above by Andrew Werner/AndrewWernerPhotography.com