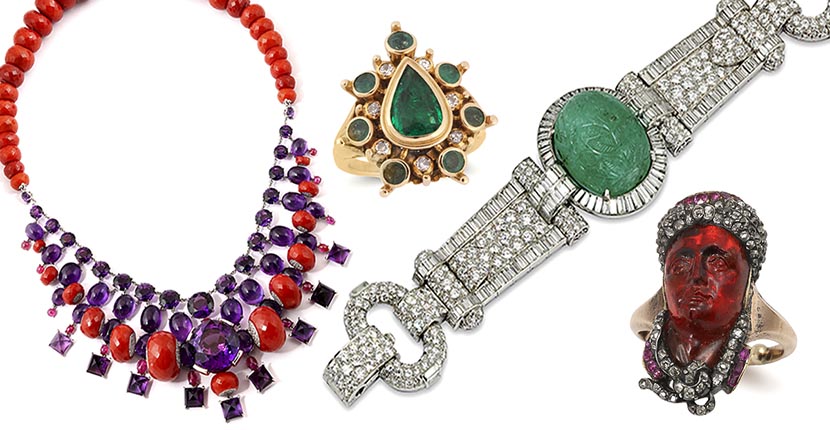 At Masterpiece London in July, everyone I ran into told me that I couldn’t leave the fair without stopping by Symbolic & Chase. I had never heard of the company before, but I was in awe of their booth. [Take a 36o degree virtual tour of it here.] The strikingly modern space displayed a carefully curated selection of vintage and contemporary jewels in perfectly lit cases. It was more reminiscent of a museum exhibition than a trade show display; each piece was paired with a label that explained its history and significance. I was intrigued by the design of the booth and the incredible selection of vintage objets d’art and contemporary gems for sale including a JAR necklace topped with a 114-carat yellow diamond that people were buzzing about. I quickly got Symbolic & Chases’s director Sophie Jackson on the phone to inquire about the history of the London-based company, how they find their amazing pieces, and what makes their space unique. 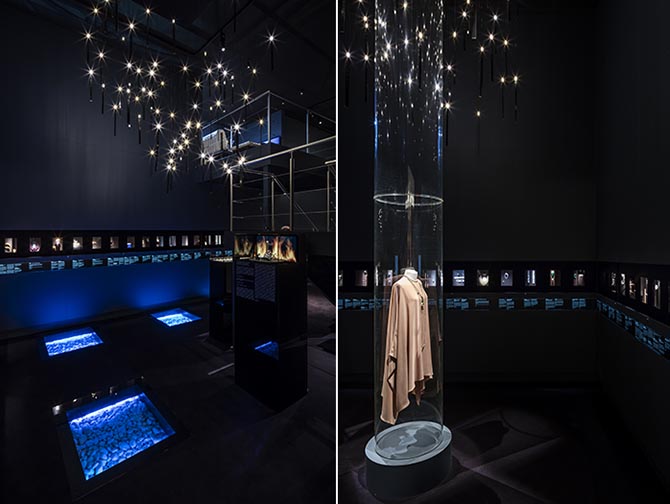 When was Symbolic & Chase founded?

It was founded by Martin Travis about twelve years ago. Before he started the business he worked in the jewelry department at Christie’s. I joined the company eight years ago, after working at Sotheby’s.

What inspired the name of the company?

Does Symbolic & Chase specialize in any particular period or type of jewelry?

It’s really just things that we love. That’s how we have ended up with such an eclectic mix of objects and jewelry. When we travel we can’t help but be seduced by pieces from all sorts of periods and cultures, there are so many beautiful things out there. We have tried to focus on exceptional pieces from all periods, but both of our hearts lie in turn of the century pieces, even if we have ended up with everything from Hellenistic objects to contemporary jewelry. 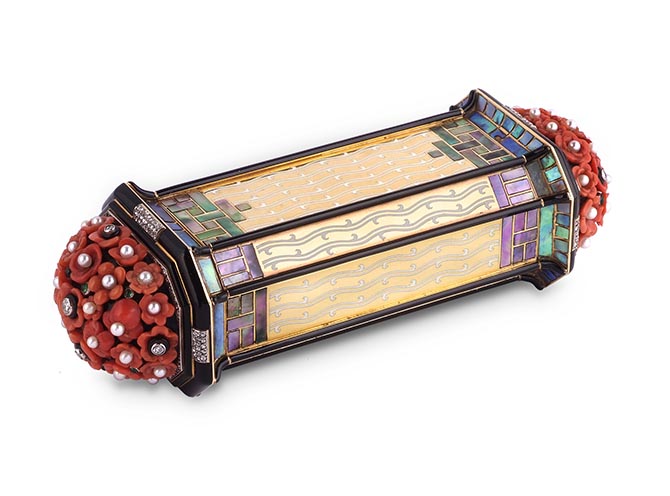 Contemporary is a new thing for us. We started in 2013, when we helped launch SABBA. The designer, Alessandro Sabbatino, was introduced to us by JAR. Alessandro had been at Cartier and he wanted to start out on his own. We helped him source stones, and it opened up a window into contemporary for us. We unveiled SABBA’s first collection at masterpiece in 2013.

If you are used to antique jewelry, very few contemporary jewelers measure up in terms of workmanship and original design. But we really thought that SABBA had something special. We also represent Carnet and we are in the process of talking to a few other contemporary designers. But our focus is still very much on vintage pieces. [The coral amethyst and diamond necklace in the top photo is by SABBA.]

Do you show at any other fairs besides Masterpiece London?

No, we don’t. We have been at Masterpiece since it started and Masterpiece is really our only opportunity to show who we are and up until last year it was the only step we took into the retail world. We’ve survived the last ten years just by word of mouth and with a collection of loyal clients, but we recently expanded our showroom on Bond Street offices and now we have been doing evening events and collaborations with different people. 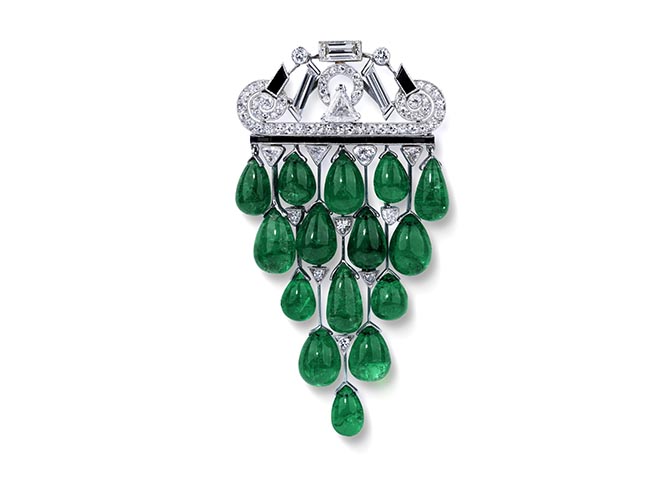 Your Masterpiece booth and your showroom share the same modern aesthetic. Can you tell me about the design?

Martin and I both love museums and wherever we go we are always looking at the exhibits. We are both mad about jewelry and antiquities. The lighting of pieces is so important, and we learned a lot about it from seeing the lighting of antiquity exhibits in museums and at fairs. Martin is also a big technology person and is always into the latest technology, so that is how we ended up with one of the more comprehensive websites before other people did.

We didn’t see technology as an adversary of antiques but something that can help explain it to people now who don’t know as much. We wanted to show that vintage jewelry didn’t have to be old school, we wanted to show that it could work well in contemporary settings and with contemporary aesthetics and interests. We are also a bit younger than other jewelers (Martin is 42 and I am 32), so that may be why we ended up being more modern. I think it is just who we are rather than a conscious decision, but it seems that it has made us stand out a bit.

A lot of the other companies are run by generations-old families and but I think its easier to be more cutting edge when you are coming at it fresh rather than when you are continuing something that’s been going on for generations. 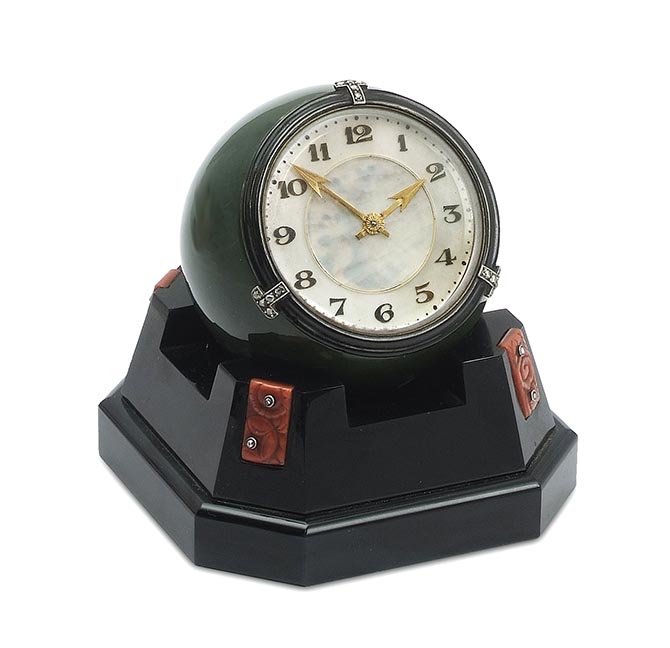 Where do you find the pieces?

All sorts of places, really. Martin and I are lucky enough to travel a lot, see beautiful things, fall in love with little treasures everywhere and then bring them home and hope other people share the same enthusiasm. We still get a lot of pieces from auctions all around the world. We try to travel to auctions as frequently as possible. And we also find many pieces through dealers and networking. When people sell to us I think they quite enjoy seeing their pieces displayed and researched as we do, and not left with a dealer in a plastic bag. We always research each jewel as much as possible. We try to find out as much about each piece as we can so that we can help explain the history to our clients. I think dealers tend to come to us because I think they like the idea of finding out more about the jewels and finding someone who really loves them.

We also acquire pieces from big families that we have come to know, especially families from the Middle East. There has been an exchange there, they bought beautiful jewelry, mainly during the 1960’s and 70’s when Van Cleef & Arpels and Cartier turned their attention to the Middle East, and we’ve seen quite a few of those pieces come back our way, from long sautoirs to coral pieces. 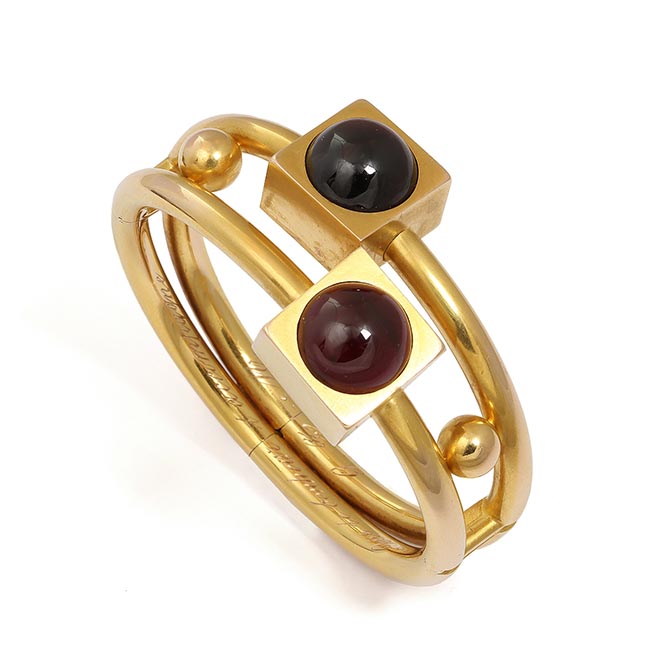 What is your favorite piece that you have ever had?

The things we love the most we’ve kept, in an awfully selfish way. My big love is a Van Cleef inseparables ring. It came from Sotheby’s London, and one of the birds is in yellow diamonds and one is in white diamonds. It is from the 1950’s. At the moment I’m also in love with this 19th century machinist style yellow gold bangle with garnets. I was researching it, and I discovered that there was this trend for shackles and bolts during the period, which makes sense because it was the beginning of industrialization and also the beginning of emancipation. The shackles related to how the relationship between men and women was changing and women were starting to break free. The bangle is the most geometric piece I’ve seen from the 19th century, and its one of my biggest crushes at the moment.

Symbolic & Chase is located at 30 Old Bond Street in London.