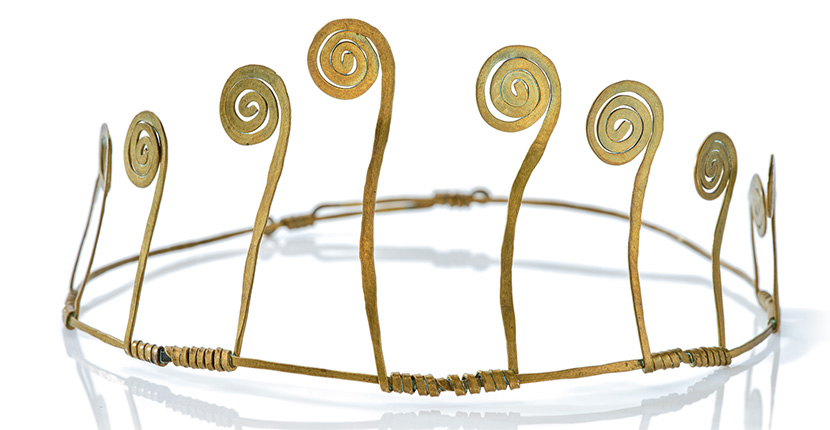 August 16, 2022—It’s been quite a year for tiaras and crowns. In early May, the Gilded Glamour theme of the Met Gala produced any number of fabulous modern and vintage tiaras. Later the same month, Sotheby’s in London opened the wildly popular exhibition of 50 tiaras in celebration of Queen Elizabeth II’s Platinum Jubilee. In June, the titanium and diamond crown of thorns Tiffany created for Kendrick Lamar caused quite a stir of controversy. Currently, several of Her Majesty’s tiaras are on display at Buckingham Palace in an exhibition titled Platinum Jubilee: The Queen’s Accession.

Among all the tiaras in the public eye this year there hasn’t been anything quite like Lady Kenneth Clark’s Calder Tiara.

The jewel is part of Sotheby’s first sale dedicated to jewelry by artists. It carries an estimate price of $200,000 to $300,000 and will be going on display at Sotheby’s New York from September 24 through October 4. Other headliners in “Art as Jewelry as Art” include Georges Braque, Salvador Dalì, Louise Nevelson and Pablo Picasso.

But it was the tiara that caught my eye. I have been familiar with the piece for quite some time. Back in the 1990s and early aughts, the jewel appeared in a Calder retrospective at the Cooper Hewitt museum in New York and the 20th century jewelry history book, Bejeweled, by yours truly.

The brass jewel with a row of tapered spiral finials rising from a circlet isn’t the only tiara Calder ever fashioned. He enjoyed the form and is known to have made several. The Calder Foundation has a couple of amazing examples including one with movable discs hanging off of three crossbars and a crown with leaves which soar over the head.

What has always made Lady Kenneth Clark’s tiara so special is the swirls, a signature motif in the artist’s work. Calder used swirls in prints, tapestries and paintings. The swirl also defined so much of his jewelry.

It is believed he started his swirl jewelry style in 1931 with the engagement ring he made for his wife Louisa. For the design he took a single piece of wire, heated it, and hammered it flat. Then he shaped it into a triple-band ring with a spiral on top.

The flat metal characterized the majority of Calder’s jewels from then on, and the spiral appeared over and over in his brass, copper, silver and gold necklaces, bracelets, brooches and rings. One of the artist’s most well-known swirl designs was the “OK” initial brooch he created for Georgia O’Keefe.

The second layer of interest behind the Calder tiara at Sotheby’s is the provenance. English art historian Sir Kenneth Clark bought the jewel for his wife Jane at the Freddy Mayor Gallery around 1938. The Clarks, who had married in 1927, were stars of London High Society.

Kenneth Clark’s first high profile moment happened when he was made director of the National Gallery during the early 1930s. There are numerous pictures of him showing members of the royal family the collection and his wife was also close to the royals. Later, Kenneth Clark became significantly more famous through a long running series of television specials he hosted on the history of art called Civilization.

Among all the public photos of the couple, I have never seen a picture of Lady Clark in her Calder tiara, but there is no doubt when she did wear it she must have turned more than a few crowned heads.

Jewelry By Artists: The Good, Bad and Ugly